A Guide to Miami's Book Publishers 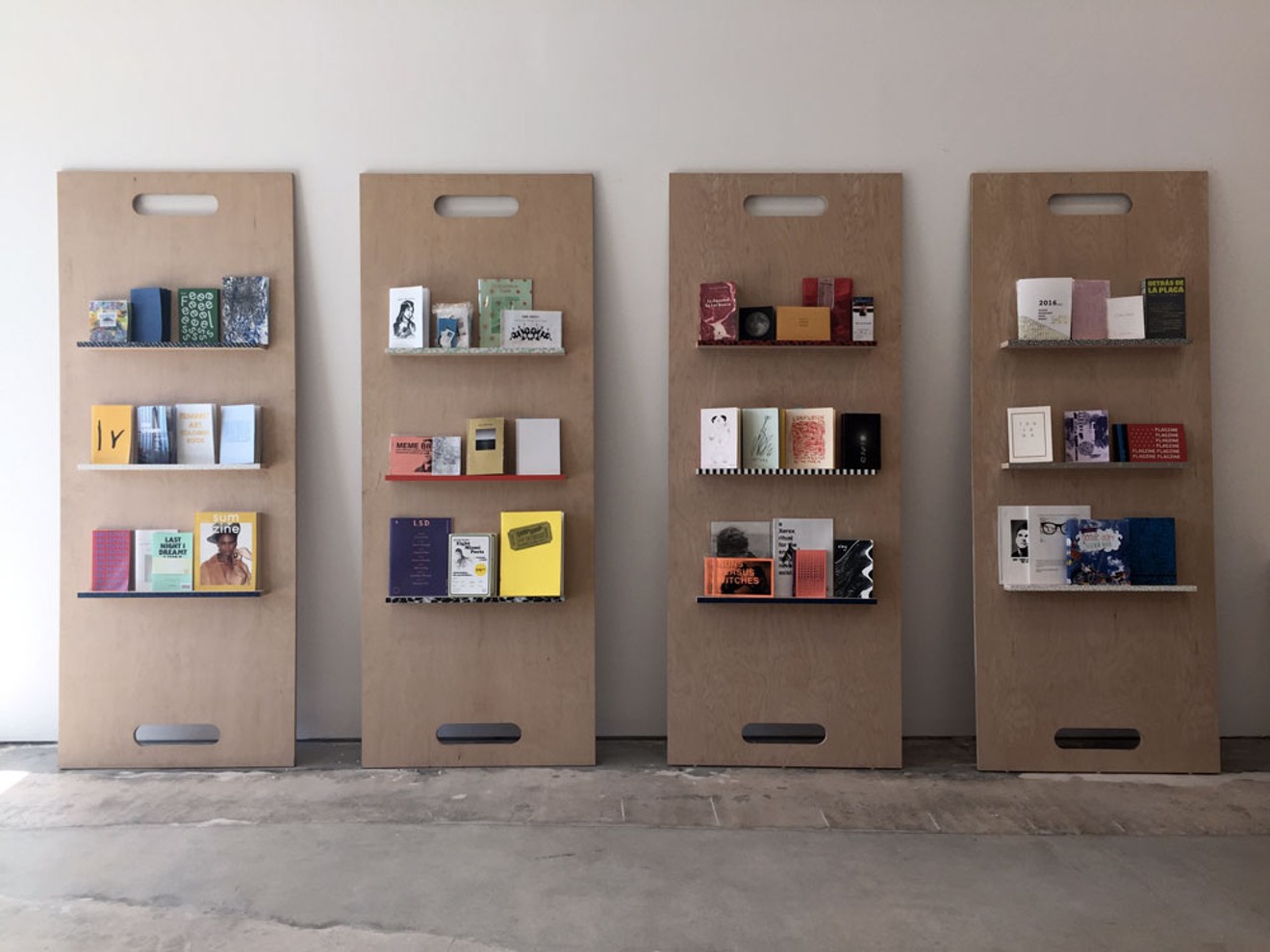 Exile Books was founded in 2014 by visual artist Amanda Keeley. Photo courtesy of Exile Books
Everyone keeps saying that print is dead, but according to Publisher's Weekly, more than 825 million books were sold in the U.S. last year. So there's still a wide contingent of people who love a bound collection of pages. While e-books and audiobooks have their time and place, there's a slew of local publishers making sure we have no shortage of actual books to dog-ear, highlight, and lend out to a friend who could use a good read.

Here's an alphabetical look at who's publishing books right here in the 305.

exilebooks.com
Launched in 2014, visual artist Amanda Keeley noticed a void of spaces in South Florida dedicated to artists' publications. Keeley designed a movable pop-up book store that could be easily assembled and broken down within an hour before Exile settled down in its current location at 5900 NW Second Ave. in Little Haiti. "Exile designs, produces, and prints books that are works of art, in and of itself," Keeley explains to New Times. "We are in the middle of some exciting new changes. In the meantime, we are featuring a very special title called The Cuba Unknown and have transformed our storefront in Little Haiti into a 'surf shack,' which is essentially a collection point for donated used surf goods and children's art supplies, which will be brought to Cuba and distributed to local surfers." 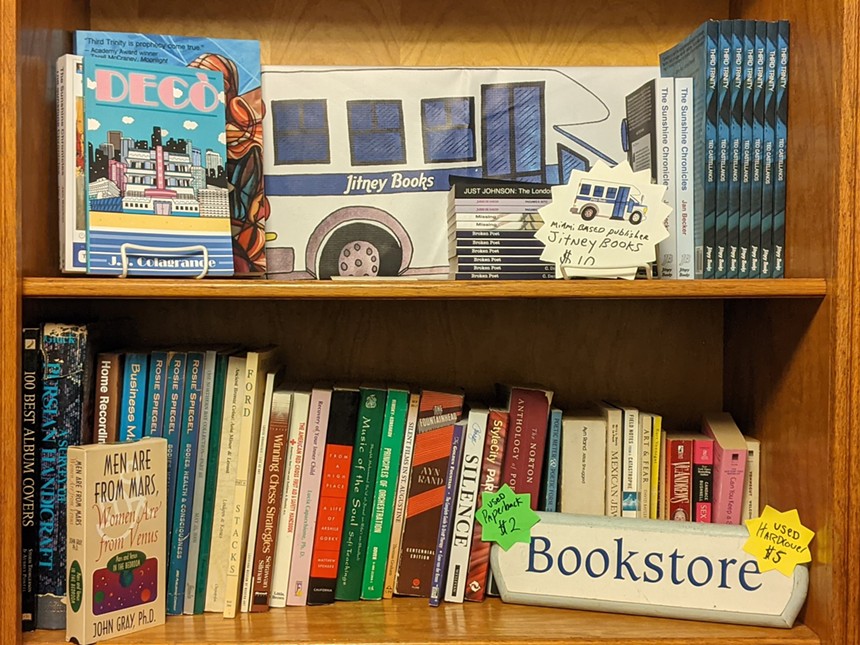 jitneybooks.com
Started by Miami Dade College English professor and former New Times contributor J.J. Colagrande in 2017, Jitney has published fourteen books by nine different authors (including two novels by the writer of this guide). Its eye-grabbing covers also feature artwork by South Florida artists. "We wanted to provide local writers with an avenue to be more involved in the publishing of their book babies," Colagrande says. "To date, we have 14 titles in our catalogue, and our list runs the gamut: eight novels, two memoirs, two translations, a short story collection, and a screenplay. We released three novels — Headz the Trilogy, The True Tales of Bad Benny Taggart, and Yo-Yo — late in 2021, and we are using this year to promote them. In 2022-23, we are trying to build the sales and distribution part of the press, then we can go back to our strength, generating great Miami content."

letter16press.com
Started by designer and photographer Francesco Casale and Brett Sokol, a journalist for the New York Times, among other publications, Letter16 Press seeks to showcase photojournalism as art. "We are dedicated to championing talented pre-digital era photographers from the 1960s through the 1990s," Sokol explains. "Digital-era advances in exposure and accessibility have delivered a cruel blow to many of the talented photographers who explored Miami’s surreal, often chaotic streets during the 1960s, '70s, and '80s. Francesco Casale and I work with these unsung but incredibly gifted photographers to carefully digitize their negatives and then collect their strongest work in a series of beautifully produced books." Spring 2023 will see the publication of Artists in Residence: Downtown New York in the 1970s by Stephen Aiken, which includes portraits of Allen Ginsberg and William Burroughs along with street photography capturing the city in all its grittiness.

mango.bz
Founded by Christopher McKenney in 2014, Mango Publishing has a very 21st-century technique toward deciding what books it publishes. "Mango established one of the first analytics teams in publishing in 2016 to focus on predictive analytics to help determine who and what type of content we should publish, and sales analytics to find out the best way to sell more books," says Geena El-Haj, Mango's marketing communications coordinator. So far, much of its focus has been on nonfiction, but they have put out several novels and are expanding this year into graphic novels and comics. In the coming year, El-Haj says readers can expect from Mango "a wide array of topics from managing the workplace, environmentalism, health and fitness, trendy cooking trends, and animal conservation. We hope that as we expand our title list, we can reach new audiences and readers that resonate and enjoy the content we publish and the authors we partner with."

omiami.org
Started in 2015 as Jai Alai Books, the press recently changed its name last year to reflect its connection with the poetry festival O, Miami. "We knew we wanted to make literary books, and we knew we wanted them to feel 'Miamian,' but at the beginning, I don't think we had a clear idea yet what that meant exactly," explains O, Miami founder and former New Times assistant editor P. Scott Cunningham. "The first books we published were a guide to foraging for edible plants in Miami and two bilingual poetry collections. The press remains an experiment, but it was especially experimental at the beginning." Cunningham adds that O, Miami Books has "a responsibility to be courageous and fun and weird with what Miami books we bring into the world." Two books on the docket for this year are More Than What Happened: the Aftermath of Gun Violence in Miami, an anthology edited by Nadege Green, and On-Shore / Off Shore, a pandemic document of poets from the Caribbean diaspora sharing work and translating one another over Zoom.

suburbanoediciones.com
The Spanish language press was founded by Pedro Medina León after realizing he knew so many great Spanish language authors whose work went unpublished in the U.S. "We saw that there were a lot of Spanish-speaking writers and that there were no publishers for them. The idea was to cover a need, let's say it that way," Medina León says. Its catalog runs the gamut, from novels to short stories and essays from authors all over the U.S., but it always keeps a lookout for South Florida talent. "For the rest of 2022, we have three authors in the Miami Book Fair, and we will close the year with one wonderful novel by the author Grethel Delgado, titled No Me Hablen de Cuba. [In 2023], we'll have 12 more books, including an anthology of local authors titled Noir Tropical, which will be the first short story collection, in Spanish, of authors writing about crime in Miami."
KEEP MIAMI NEW TIMES FREE... Since we started Miami New Times, it has been defined as the free, independent voice of Miami, and we'd like to keep it that way. With local media under siege, it's more important than ever for us to rally support behind funding our local journalism. You can help by participating in our "I Support" program, allowing us to keep offering readers access to our incisive coverage of local news, food and culture with no paywalls.
Make a one-time donation today for as little as $1.