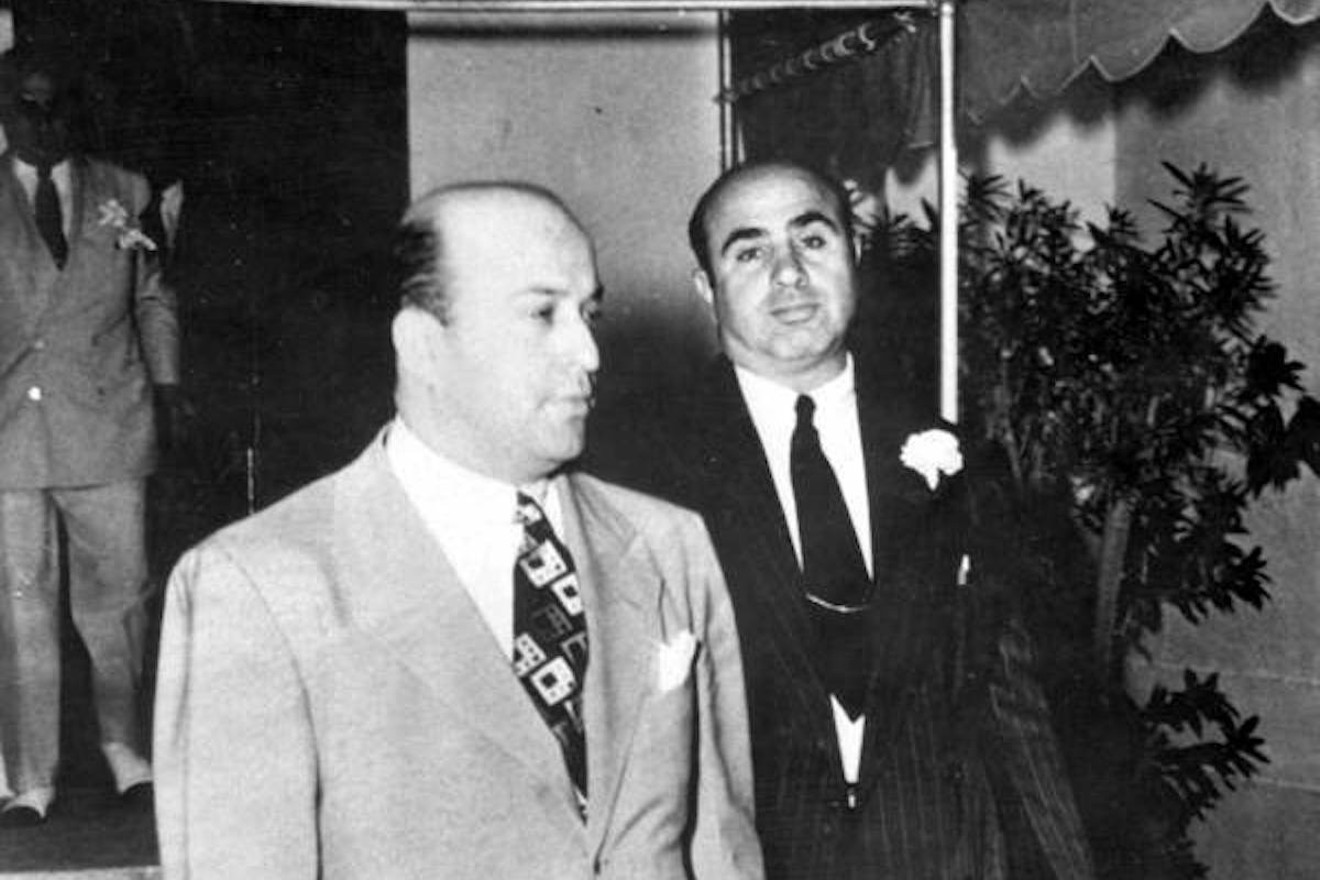 Al Capone (right) in Miami Beach. Photo courtesy of State Library and Archives of Florida
Prepare to experience a different side of Al Capone. The upcoming Capone biopic, starring Tom Hardy as the Prohibition-era mob boss, appears to focus more on his fragile final years in his Miami Beach home battling syphilis rather than his infamous reign of terror in Chicago. Just don't expect to recognize any Miami locales in Capone: The movie was shot in New Orleans.

To prep you for the flick — available May 12 on VOD — New Times has put together a list of spots in Miami that historians say have ties to Capone. That means no rumored hangouts like the 13th floor of the Biltmore Hotel (a rumor, for the record, that HistoryMiami's Paul George disputes) or the Forge steakhouse — that is, unless you have proof the wine cellar is haunted by Capone's ghost. Capeesh?

3605 Indian Creek Dr., Miami Beach
Capone was no longer welcome in Chicago or just about anywhere else in the U.S. by the end of the 1920s. His mobster rep preceded him, which made finding a place to stay with his wife and son difficult. That's where Miami comes in, naturally. Capone figured a city known for its lax perspectives on prohibition and gambling would be a good fit, according to Miami History. And so the Capones rented a home on the beach at 3605 Indian Creek Dr., which has since been torn down and turned into the Waterview Condo Apartments. But one house in Miami wasn't enough; he also rented the penthouse suite at the since-demolished Ponce de Leon Hotel at 231 E. Flagler St. 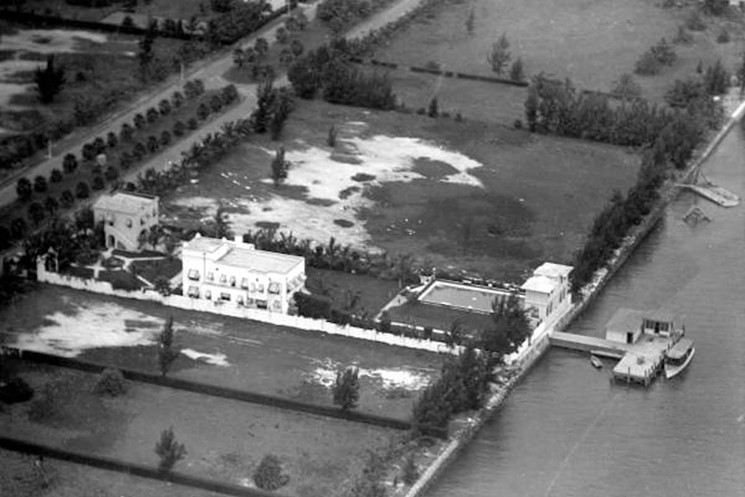 93 Palm Ave., Miami Beach
This exclusive island has been home to big shots like Birdman, Scott Storch, and Rockstar Energy Drink founder Russ Weiner, but none of those shots were bigger than Big Al. Capone bought his 14-room Palm Island home in 1928 for a reported $40,000 and spent more than $100,000 on upgrades. He initially stayed at the Spanish-style home on and off but eventually moved there full time in 1939 after serving seven and a half years in prison. (He was released early owing to his deteriorating health.) Paul George — who leads various tours that pass by the home — has said that much of Capone's later years were spent by the pool asking for a Dr Pepper. The house where Capone died of cardiac arrest in 1947 is currently on the market for $13 million.

11 Washington Ave., Miami Beach
Just how famous was Capone in Miami? The folks at Joe's tone Crab say he and his cronies regularly dined at the Miami Beach institution around 5 p.m. to avoid being spotted by the dinner crowd. But not everyone recognized the notorious gangster. As the story goes, Joe's cofounder Jennie Weiss didn't realize who exactly she was dealing with — Capone dined there under the alias Al Brown — and considered him to be a "gentleman." It's said Capone had flowers and a horseshoe that read "Good Luck Mother Joe's" delivered to Weiss on Mother's Day. Nice guy, that Capone — you know, for a guy said to have orchestrated countless murders. 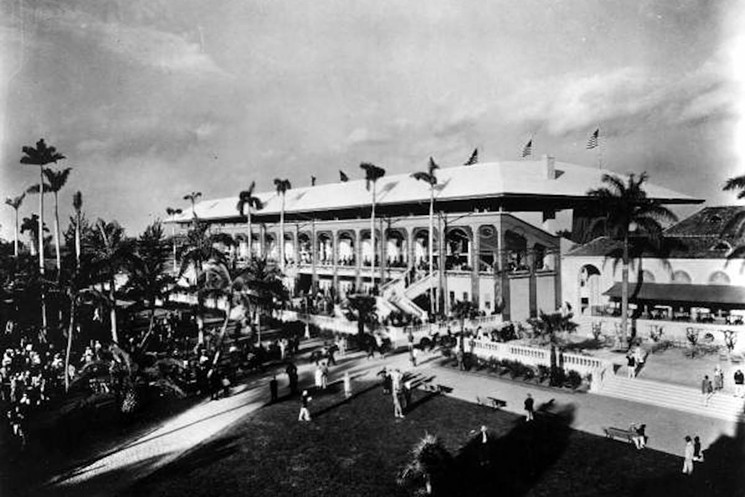 Hialeah Race Track in 1932.
Photo courtesy of State Library and Archives of Florida

2200 E. Fourth Ave., Hialeah
Capone claimed through his lawyers that he was bedridden in Miami Beach with bronchopneumonia and was too sick to testify before a grand jury in Chicago in 1929. When federal agents were sent to verify those claims, they discovered that Capone frequently attended races at the Miami Jockey Club (now known as Hialeah Park) and appeared to be in good health. Their conclusion: Capone was full of shit. He was eventually arrested for contempt of court, which many pinpoint as the beginning of the end for the once-elusive mobster.

600 Biscayne Blvd., Miami
Former Miami Daily News owner James M. Cox wrote in his autobiography, Journey Through My Years, that he believed Capone tried to make him an offer he couldn't refuse. He claimed a man was sent to the Miami News Tower (now known as the Freedom Tower) to convince Cox to sell the newspaper for $5 million. The guy never revealed who he was working for, but Cox had no doubt the gambit had Capone's fingerprints all over it. The offer was far more than the newspaper was worth. Not that it mattered to the wealthy Capone, who could silence one of his harshest critics with the purchase. Cox wrote that he immediately declined the offer. 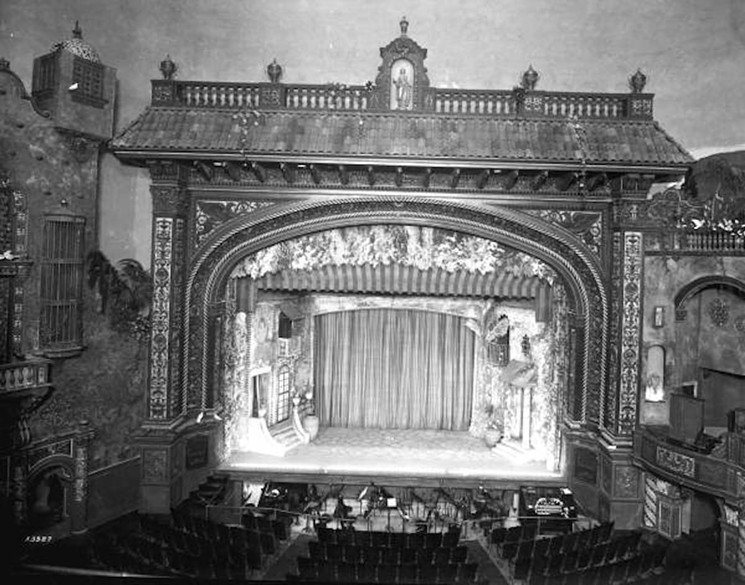 Interior of the Olympia Theater in 1926.
Photo courtesy of State Library and Archives of Florida

174 E. Flagler St., Miami
Former Miami public safety director Sam D. McCreary was so hellbent on making life miserable for "Scarface" that Capone couldn't even go to the movies in Miami without local authorities riding his ass. On the way to the Olympia Theater to catch a matinee showing of The Return of Dr. Fu Manchu in 1930, Capone was arrested for "investigation." Translation: He was hauled into police headquarters and made aware in so many words that he was persona non grata in Miami.

73 W. Flagler St., Miami
McCreary didn't completely back off when Capone accused him under oath of false imprisonment and alleged that he was denied the use of a telephone. Instead, the top cop upped the ante and charged Capone with perjury. The 1930 perjury trial took place in courtroom 6-1 at the Miami-Dade County Courthouse and ended after three days with an acquittal. (In 2010, the 11th Judicial Circuit of Florida used actors to recreate the trial in that very same courtroom, as part of the circuit's centennial celebration.) But this wasn't Capone's first Miami-Dade County Courthouse visit. He just so happened to have a meeting there in 1929 around the time seven of his rival's henchmen were gunned down in a Chicago alley on Valentine's Day, providing him with a solid but highly suspicious alibi.

6970 Collins Ave., Miami Beach
Capone's wife, Mae, and son, Sonny, remained in the Miami area long after he died and, beginning in 1956, ran an Italian restaurant called Ted's Grotto. During their ten years as owners, Mae worked the cash register while Sonny served as maître d', according to the book Get Capone. Today, the space is occupied by one Las Vegas Cuban Cuisine's dozen locations; the owners intend to redevelop the spot to add a multistory co-living project.
KEEP MIAMI NEW TIMES FREE... Since we started Miami New Times, it has been defined as the free, independent voice of Miami, and we'd like to keep it that way. With local media under siege, it's more important than ever for us to rally support behind funding our local journalism. You can help by participating in our "I Support" program, allowing us to keep offering readers access to our incisive coverage of local news, food and culture with no paywalls.
Make a one-time donation today for as little as $1.