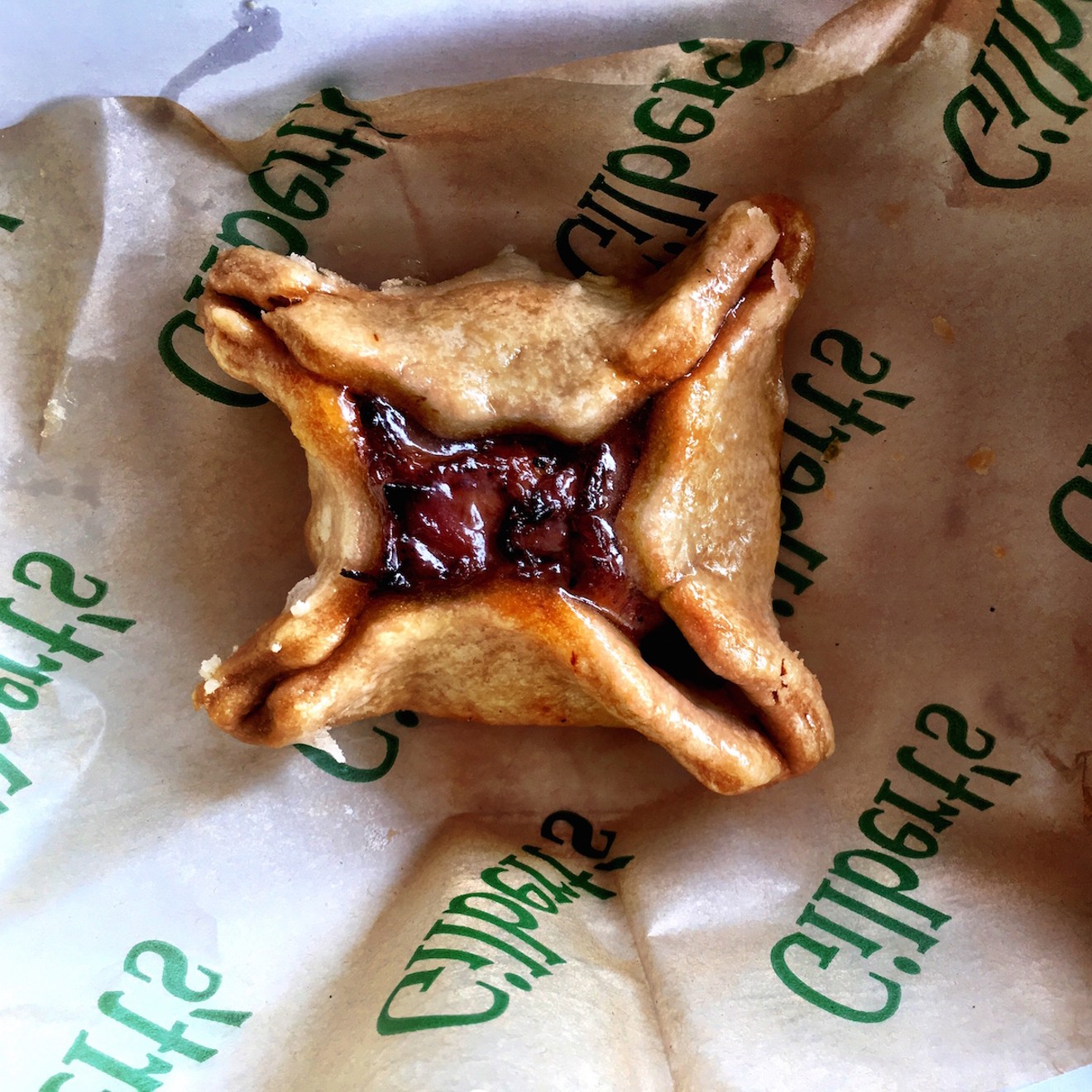 Gilbert's Bakery's menesier de tuna. Photo by Zachary Fagenson
The tuna pastelitos from Gilbert's Bakery shouldn't be as good as they are. The recipe alone sounds like the kind of outlandish concoction to spring out of one of IBM Chef Watson's algorithms. The menesier de tuna ($1.25) folds a slightly flaky, crumbly crust like that of pie dough around shredded albacore tuna prepared in the style of ropa vieja. Once the pastries are out of the oven and cooled, a quick slick of sugar syrup gives them a chrome-like shine.

Why does it work? Unlike most of the delicious, diabetes-inducing Cuban pastries, this one offers depth and complexity. The richness of the dough combined with the sweet glaze and the savory, salty filling creates a handheld snack that boasts more flavors than it ought to.

The tale of how the menesier de tuna ended up in Miami begins in Camagüey, Cuba, where Fernando Alvarez — the father of Gilbert's Bakery's founder, Gilberto Arriaza Sr. — was born. Though raised by a working-class family, he married into one with wealthy, educated relatives who one day decided to open a bakery business.

"They started by making things at home, and they would just sell baked goods off the back of bicycles all over Camagüey," says Gilberto Arriaza Jr., who today runs the Miami business.

Eventually, the operation grew large enough that it had to be moved to its own facility, where it became known as Dulceria Perezsosa. The bakery was located on the ground floor, and the family lived in a maze of apartments above it.

"It was off of the train tracks in Camagüey in the actual city, but it grew and it grew and got to the point that they owned an entire street block," Arriaza recounts. Gilbert's vol au vent de tuna.
Photo by Zachary Fagenson
The place became something of a legend in Cuba. It was where all of the almond nougat for the island, as well as a Cuban-style cornbread called karacas and a poundcake known as gaseñiga, was made, Arriaza says.

Arriaza's father was born in 1942, seemingly into Cuban royalty. But the family's prosperity was on a timer as the communist revolution grew nearer every day.

"During my parents' wedding, the bakery was nationalized," Arriaza says. "It was coordinated because nobody from the family was at the plant, and our foreman was the one who opened the doors for the military."

By 1964, Arriaza's parents had fled to Miami where his father opened a bakery on Douglas Road and SW 16th Street. In an effort to stand out, Arriaza wanted to offer unique, even obscure pastries that some Cubans might remember from home. One of his bakers in Miami had lived in Santiago de Cuba and recalled an Italian bakery, situated next to a church, owned by a Mr. Meneses who made a pastelito unlike any other on the island. "They were made primarily with beef and guava; here, we move a lot of chicken," Arriaza says. Thus, Miami's menesier de tuna was born.

Though the seafood iteration of the snack is only regularly produced during Lent, Arriaza says it can be ordered year-round. So, too, can the vol au vent de tuna (90 cents), in which a sugar-glazed round of puff pastry, the same kind that encases the picadillo in your favorite pastel de carne, is scooped out in the middle and filled with a creamy, slightly oily, and salty tuna salad.

Though they might seem strange, the off-kilter pastries are the Arriaza family's way of continuing small Cuban traditions in Miami. Over the years, Arriaza says, he's seen a number of pastries and snacks once consumed en masse on the island slip into oblivion, and he's made an effort to keep them alive. One of them is the carne fría.

"It's like a meatloaf that's boiled and then sliced, and that’s what you’re served at parties," he says over a stiff, sugary cup of Cuban coffee at his Bird Road location. "It was something that was served at every party. They had carne fría, bocaditos, and pastelitos."

As he began selling and displaying, he noticed more people buying it. Perhaps with the help of a few adventuresome eaters, Arriaza can restore the menesier de tuna to its rightful place.