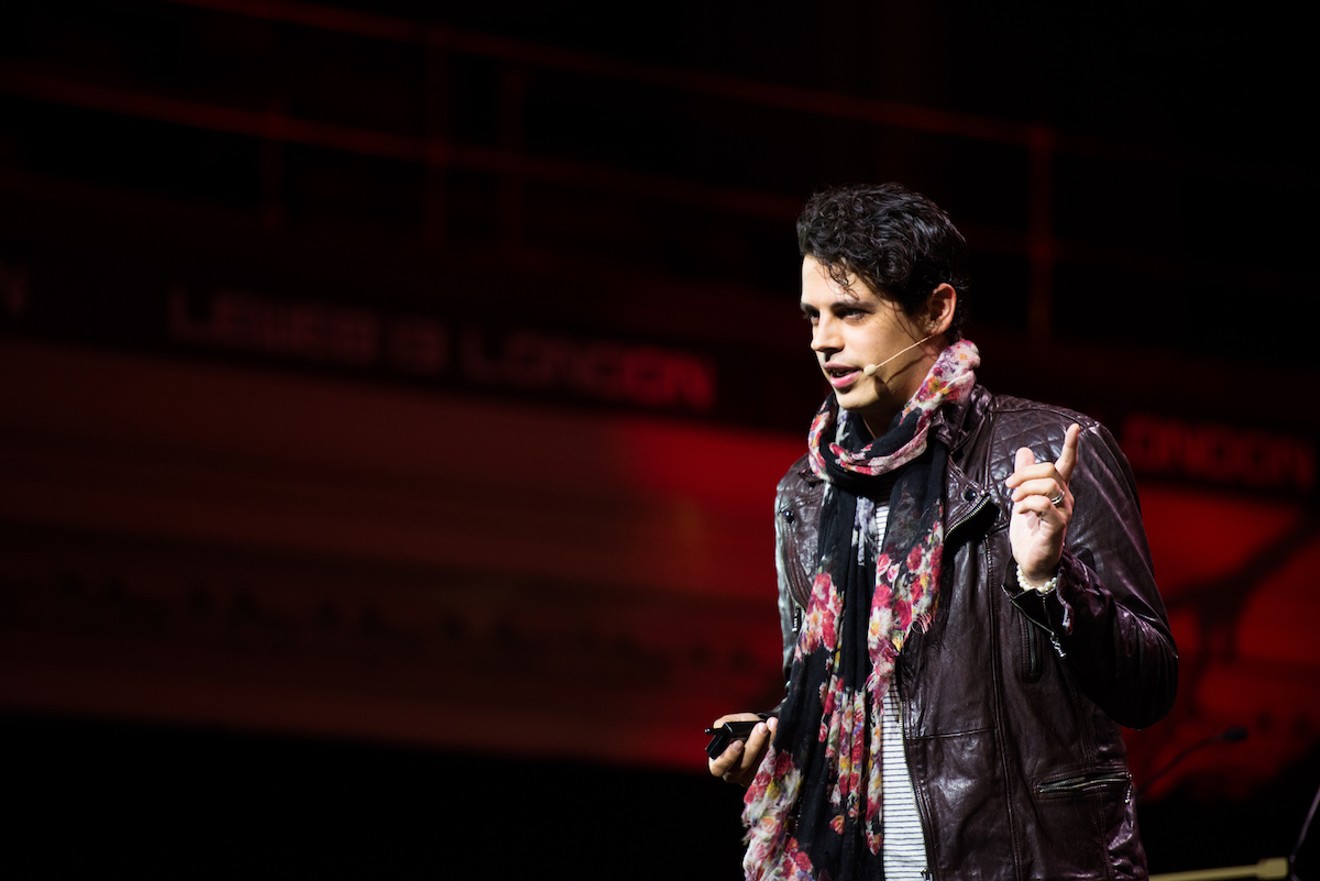 Milo Yiannopoulos Kemron for LeWeb / Flickr
Update: One of the three agencies that provided models at the event, Golden Girls of Miami Talent Agency, stressed that their employees were fully informed about the party, Golden Girls's owners, Holly Kay and Heather Shanholtz, tell New Times. Kay and Shanholtz said they could not speak for the other agencies involved. The model who spoke to New Times said the separate agency that booked her did not warn models what they were getting into before they arrived.

As Milo Yiannopoulos descended from the second floor of a place he advertised as an "abandoned cocaine mansion" in Miami last Friday night with a python named "Jared" draped around his arms, two models hid in a bathroom to avoid being photographed with the infamous anti-Muslim, anti-immigrant troll, one of those women tells New Times.

In fact, she says, some of the models — who had been hired for the event — hadn't been warned they'd be working as eye candy and cocktail waitresses at an alt-right event complete with signs that read "Feminism Cancer" and "Deport Your Local Illegal." The model says she didn't know what she was in for until she arrived at the party and saw scores of "Make America Great Again" hats.

"None of us knew what we were walking into," says the model, who asked to remain anonymous for fear of retaliation or harassment from Yiannopoulos' fans. "Some of the girls walking behind him in those shots were like, 'My mother is an immigrant. If she ever saw me next to this man, it would kill her.' But if you're working in those situations, you don't feel like you can say anything because you need your money and need to pay your bills."

Yiannopoulos is a former Breitbart writer famous among conservatives for publishing antifeminist and anti-immigrant screeds online. He used the bash — which he named "Cinco de Milo" — as a return to public life after losing his Breitbart gig and a Simon & Schuster book deal when video footage surfaced of him defending sex between adult men and 13-year-old boys. Yiannopoulos announced this past April that he would move to Miami and start a new venture, Milo Inc., dedicated to trolling and harassing feminists, Black Lives Matter and journalists.

Friday's party was Yiannopoulos' first public appearance in town since the news broke, and he brought along Roger Stone, the Donald Trump adviser ensnared in an FBI probe over his alleged communications with Russian hackers.

Yiannopoulos declined to respond to the model's claims and called a previous New Times article about his party a "smorgasbord of libel and untruth." (Read his full statement at the bottom of this post.) If he changes his mind, we will add his comments.

The model says she ended up at Yiannopoulos' shindig after a local booking agent put out a call for "attractive, model-looking females" to work as cocktail waitresses at an undisclosed mansion party somewhere in town. She said the talent agent was promising $400 per person, a very high rate for "performance jobs" in Miami.

"It was a really good rate for doing absolutely nothing," she says. "The girl who hired me basically told me that it was just a house party, but she didn't have a lot more details than that. It sounded . They told me to just bring, like, a black bikini."

She says multiple booking agents put out calls for talent, but none of the models she spoke to had been told what the nature of the event was before they arrived. (The anonymous model says she was not hired by Golden Girls, a South Florida model and talent agency, but declined to say who hired her.)

Instead, the model says, she and some co-workers took an Uber together to the booking agent's home and then drove to the mansion, which she says was close to Brickell. The models were whisked to a back and were each handed $400 in cash, which someone had divvied up from a wad of bills.

But once the women began walking through the party, the model says, things seemed amiss: For one, there were only two bartenders for "maybe 100 or 150 people," she says. And there was just one bathroom.

Then she turned a corner and saw a gigantic sign hovering over her: "Feminism Is Cancer," it read.

"I start noticing half the guests wearing hats that say, 'Make America Great Again,' and I'm like, Shut the fuck up — this is not really where I’m at right now", she says. "And so there’s a flip-cup table, and people are playing flip cup. Inside that room, in this house they have rented, they took black paint and painted, 'Feminism Is Cancer'? What the fuck? I almost flipped out when I saw that. I was like, 'Don’t go back in that room.' That was really disgusting and disturbing to me."

After leaving the red flip-cup-and-misogyny room, the model says, she turned another corner and saw a wall of yellow signs that read, "Deport Your Local Illegal." At this, she walked out back to smoke cigarettes with some of the other models.

"Then this one guy asked me, 'So you’re conservative?'" she says and then adds rhetorically: "Because I’m at this party half-naked? Can’t you tell? I’m not [conservative] at all. I don’t want to be associated with any of those people. I grew up in the Baptist Bible Belt, and that sort of conservative stuff is just not fair or OK. You don’t judge a person by who they love; you don’t judge them by what they have."

Yiannopoulos advertised the party on the website the Tab, an outlet for college students. The model says that the crowd looked remarkably young for a house party ("definitely a bunch of college kids") and that some of the attendees, including a few nonwhite people wearing #MAGA hats, surprised her by their presence. She says other guests told her they'd flown in from New York City or England to party at Yiannopoulos' "Meme Mansion."

Around this time, she says, the booking agent began apologizing to the models for roping them into an event they clearly wouldn't have chosen to attend. At this point, however, the model says, she still had no idea who Yiannopoulos was because she doesn't read Breitbart. She began frantically Googling him on her phone — and quickly realized there was no way in hell she'd let herself be photographed next to him.

She says she "would never be caught dead associated with that person, and there's not enough money in the world to be paid well enough to be associated with him." Then one of his liaisons asked the models to come upstairs to help the host make a regal entrance to speak to his followers.

"They were only paying us to be there until 11, and when we only had an hour and a half left, some guy comes to the back and is like, 'Hey, girls, we're going to need you upstairs,'" the model says. "A couple of the girls went with him, but I was like, Bitch, I am hiding."

She says that having already been paid cash upfront, she and another model locked themselves in the bathroom while Yiannopoulos made his grand entrance, strolling slowly down the mansion's staircase with the python draped around his arms. The other models followed him and encircled him as he announced he was suing Simon & Schuster for canceling his book. He said he would start his own publishing company and embark on a speaking tour.

"Why do you need half-naked girls?" the anonymous model asks rhetorically, explaining there's a clear difference between sex work or dancing in a positive setting and doing so for someone like Yiannopoulos. "What is this doing? Exploiting women? Using their sexuality, like, it's cool to be surrounded by half-naked, hot girls?"

She adds that most of the people at the party seemed obsessed with taking photos next to Yiannopoulos rather than having any sort of discussion about politics or conservative ideals.

After the speech, the model says, her booking agent told everyone they could leave. The model says she and a friend originally tried to sneak out a back door, but the property's rear gate was locked, so they just grabbed their bags and walked out the front door.

"If it’s any indication of how successful his trolling company will be, I would say it's going to be highly unsuccessful," she says. "They were a bunch of numb nuts."

I had never heard of your publication until my staff informed me today that you had described me as "the racist, trans-phobic, public-harassment demon king of the white supremacist alt-right."

It is tough to know where to start with this smorgasbord of libel and untruth. I challenge you to produce a single statement of mine that can fairly be called racist. I defy you to locate any statement or interview in which I describe myself as alt-right. And I invite you to justify your bizarre and outrageous association of me with white supremacy. I can, by contrast, supply you with dozens of examples of me disavowing identity politics of every kind, including white nationalism.

Fortunately for you, your readership is too pitiful for your false and defamatory claims to be worthy of my lawyers' consideration. You will be receiving no comment from me, ever, on any subject, you mendacious, bottom-feeding sack of shit.