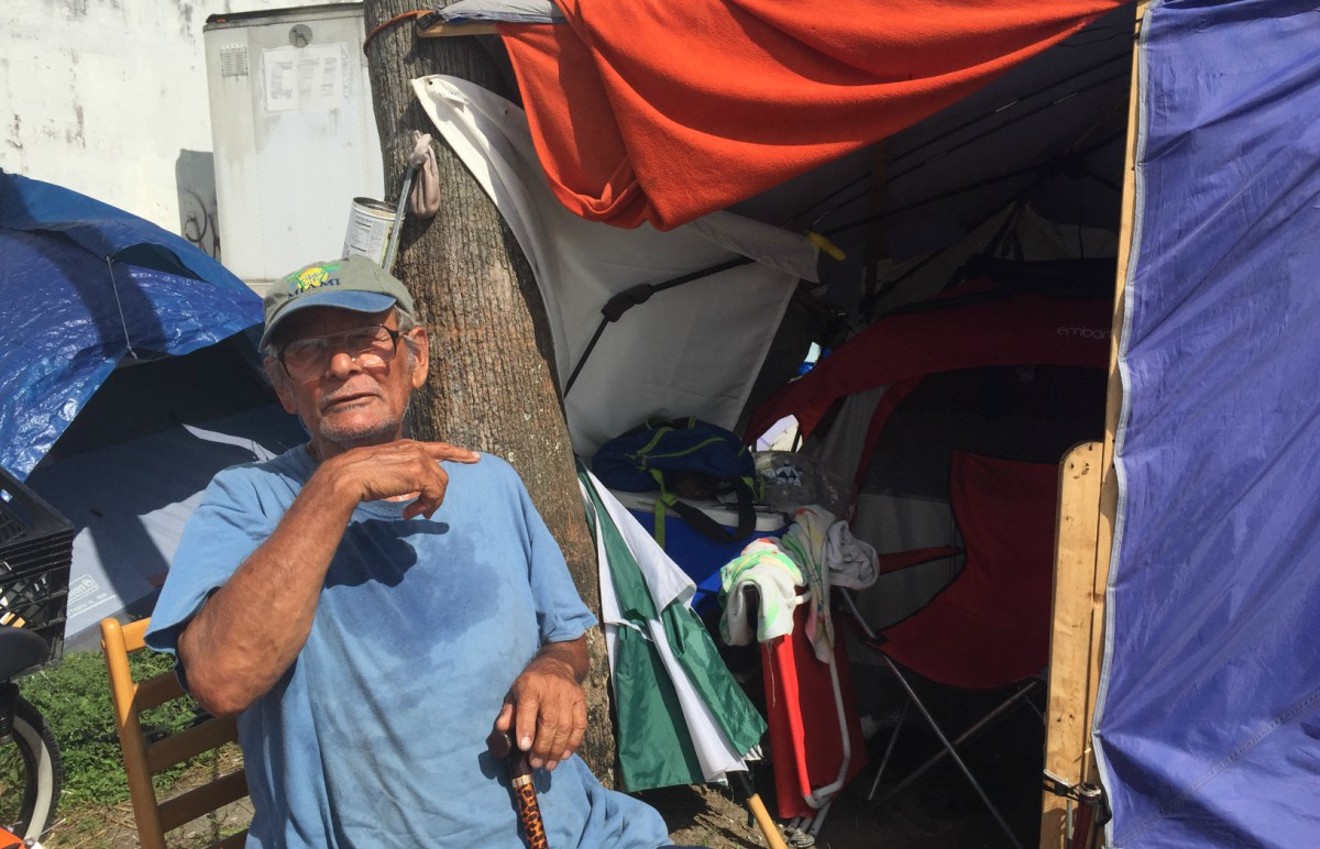 Photo by Isabella Gomes
For 12 years, Miami-Dade's registered sex offenders have been barred from living within 2,500 feet of any school, playground, or daycare. They're effectively homeless by law, and today hundreds live in squalor in makeshift "tent cities" under bridges, near trailer parks, and on roadsides. After New Times reported on a camp near Hialeah, county officials called these encampments inhumane and unsanitary and promised a solution.

That solution, though, apparently isn't to amend the law or to find transitional housing. Two commissioners now want to simply put the offenders back in jail.

This morning, the county commission considered an ordinance that would change Miami-Dade’s policy on what to do with homeless people who are found sleeping on public property. Currently, police are required to offer homeless people the chance to go to a shelter before arresting them, but under the proposed change, homeless sex offenders would be immediately arrested.

Members of the local American Civil Liberties Union and the Florida Action Committee (FAC) have already called the measure excessive punishment and are demanding that commissioners vote against it.

“Instead of building affordable housing, [the county] would rather spend money on incarceration and criminalizing homelessness,” says ACLU attorney Nancy Abudu, who is defending three homeless sex offenders in a lawsuit against Miami-Dade.

Since the county passed its restrictive laws in 2005, sex offenders across Miami-Dade have struggled to find permanent residences. Because the majority of the county is off-limits, dozens were forced to live under the Julia Tuttle Causeway until a national backlash resulted in their relocation. By 2014, the colony had been moved multiple times, eventually to a set of railroad tracks near Hialeah, where at least 233 offenders have lived in tents since then.

This past August, New Times investigated the encampment at NW 71st Street and NW 36th Court, which local business owners say has scared customers away and made them worry for their safety. Soon after, Homeless Trust Chairman Ron Book declared the site a “health crisis” and promised the county would shut it down as soon as possible. In spite of his remarks, the camp is still there months later.

Critics have long demanded that the county relocate sex offenders to legal housing. However, many commissioners disagree. One, in particular, has offered his own solution: placing offenders back behind bars.

Recently, Commissioner Esteban Bovo drafted a proposal to amend the county code governing overnight camping on public property. The code states that law enforcement is required to offer homeless people the opportunity to go to a shelter before arresting them. Bovo’s ordinance, however, would eliminate this safeguard for sex offenders, claiming it has been an “unworkable, unduly [burden] on law enforcement” because sex offenders are ineligible to stay at homeless shelters anyway.

Bovo’s ordinance, cosponsored by Commissioner Rebeca Sosa, passed its first hearing this morning and is scheduled to go to committee in December. If it's approved, homeless sex offenders would be vulnerable to immediate arrests, while other homeless people would continue to be protected under the code.

Bovo says that “as commissioners, we are tasked with identifying ways in which to keep the residents and families of Miami-Dade safe, and this item accomplishes this goal.”

Many homeless advocates, however, insist the ordinance would not improve public safety.

“It’s ill-informed, uninformed policy,” says Gail Colletta, president of the FAC. If anything, the ordinance would put sex offenders, who are trying to be compliant with the county law, between “a rock and a hard place,” she says.

“Either they stay in the area and risk violating the [ordinance], or they leave and risk arrest for violating the county’s [residency restriction]," she says. "It’s a lose-lose situation.”

Abudu says the ordinance might also violate the state and federal constitutions because it would add time to sex offenders’ criminal sentences retroactively. “It’s unfair to set these people up for incarceration, where they’ll be subject to poor mental-health services, overcrowding, and limited resources,” she says.

Of particular concern, Colletta says, is the motivation behind the ordinance: “It seems like a pointless move on [the county’s] part. Either it’ll push [sex offenders] to go underground or, if they’re arrested, taxpayers will be forced to foot the bill.”

Instead, the ACLU and the FAC urge the county to do away with its harsh policies.

"[The county] should be getting rid of the residency restriction," Colletta says. "These people shouldn't need to live on the street in the first place.”