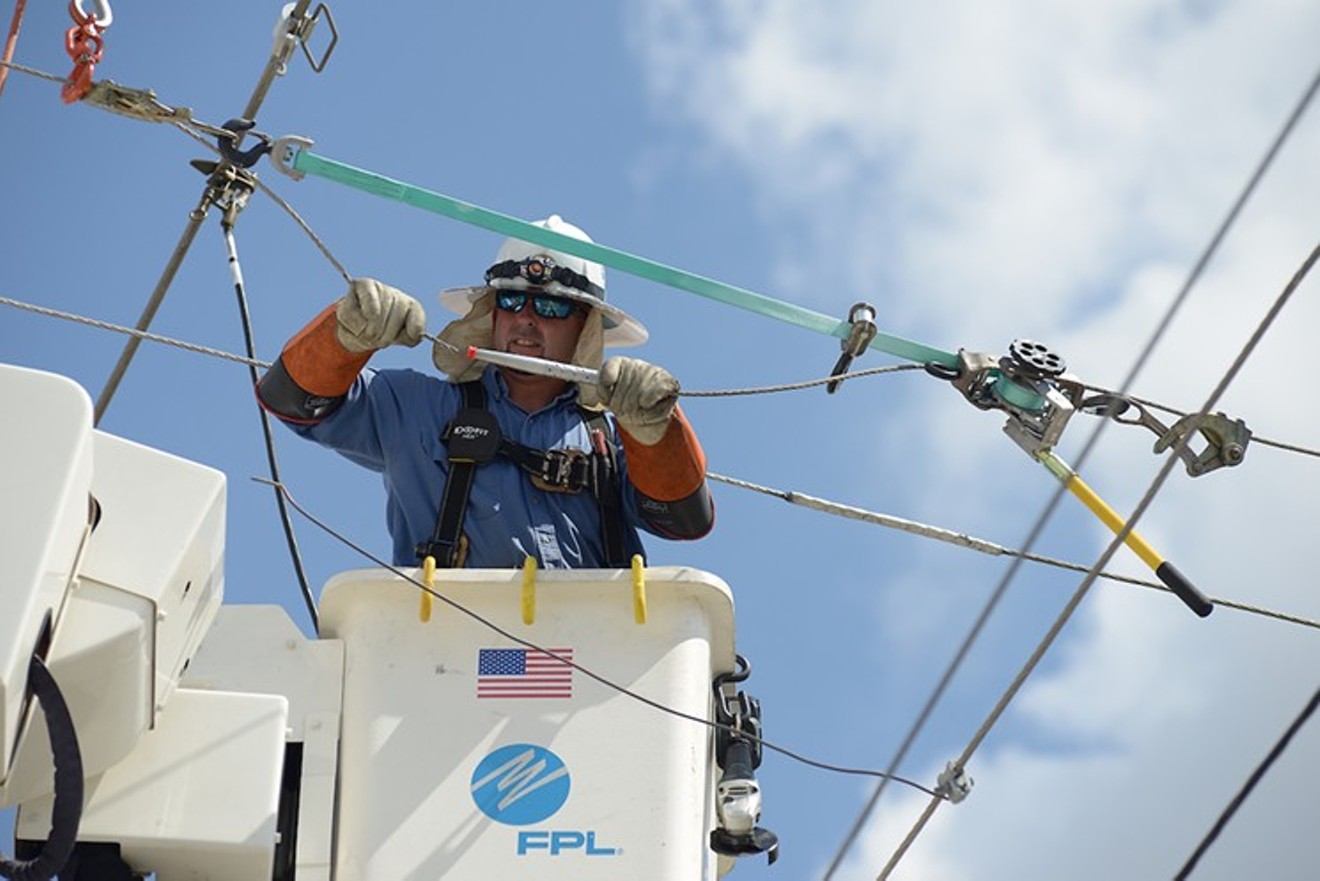 Turns out the vast majority of Miami Beach would love to see that happen. New data released this week shows that 87 percent of Beach residents surveyed by the city want their lines buried to harden the grid against hurricanes. The city sent out 616 mailers to residents in three sections of town, and of the 257 who responded, 225 said it's time to make big changes to the city electrical grid after Irma. (Though the data does not seem to be large enough to be a full-on representative sample of the town, it does shed some light on the desires of residents.)

The rub, of course, is how to bury the lines — a procedure FPL says is not cheap. Only 16 percent of respondents said they'd pay a standalone tax on their properties to cover construction costs in their neighborhoods. A full 56 percent, though, said they'd be OK with slightly higher taxes as long as the city kicked in extra money from its general tax fund.

As one might expect, burying lines tends to be expensive, and FPL, a company that made $1.8 billion in net profit in 2017, has historically forced towns to pony up costs to bury their own power lines and warned that burying lines is not a fix-all to protect against storm damage. Flooding can still knock out underground transmission cables, after all.

In one instance, FPL even fought Miami and other towns to avoid burying a huge set of transmission lines connected to the Turkey Point Nuclear Generating Station in Homestead. (The company has been accused by critics of placing corporate profit over the needs of customers, especially after fighting the adoption of home solar panels in 2016.)

After Irma, residents questioned how FPL had been spending its so-called storm-hardening money, which has totaled $3 billion since Hurricane Wilma in 2005. FPL says the billions went toward bringing the grid back faster after a storm instead of preventing the grid from getting knocked out.

By the end of September, the Sun Sentinel noted that FPL was "changing the narrative" the company historically used when it came to burying lines. The newspaper noted that FPL CEO Eric Silagy announced the company's executives are now proponents of "undergrounding" and want to help cities convert as many lines as possible.

"We’re big fans of undergrounding,” Silagy reportedly said last year. “Forty percent of our entire system is underground today... we’re supportive of it and want to work with any community that wants to do that.” (FPL now says it plans to "harden" the rest of its grid within "five to seven years.")

The Sun Sentinel quoted a 2014 reliability report FPL sent to the Florida Public Service Commission, which noted that underground lines are vastly more reliable than overhead ones and questioned whether forcing municipalities to pony up construction costs to bury lines creates a rich/poor divide where wealthy towns live with vastly superior electrical grids, while poor towns sit in the dark after storms:

• Overhead customers were without power for 108.1 minutes, compared to 19.4 minutes for underground customers.

• Overhead customers had 1.35 service interruptions, compared to .4 for underground customers.

• To completely resolve an outage for all affected customers, it took 161 minutes for an overhead system, compared to 205 minutes for an underground system.

In January 2018, FPL announced it was decreasing costs for undergrounding lines. The company now says it will cover city costs for "overhead pole and line removal."

Earlier this month, the National Hurricane Center released its final report about Hurricane Irma's impact: It noted South Florida did not encounter "sustained" hurricane-force winds during the storm, unlike the Naples area. Despite that fact, 92 percent of Miami-Dade County residents lost power during the storm.