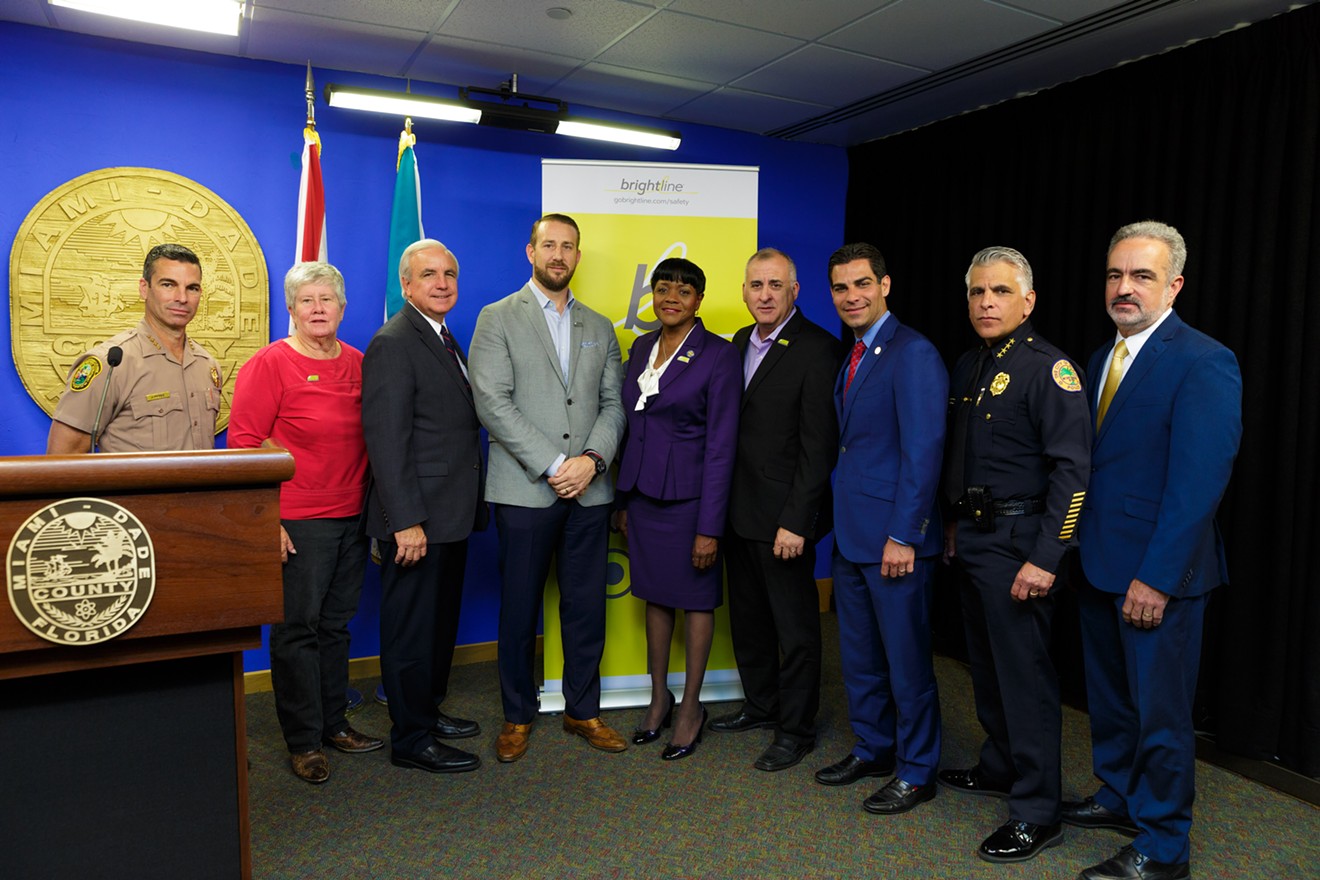 Brightline executives and Miami-Date public officials. Courtesy of Brightline
Update 5/11: Brightline's service from Miami to Fort Lauderdale and West Palm will start on Saturday, May 19, the company announced. Fare prices out of Miami haven't been announced yet.

Brightline, the privately funded, lemon-yellow intercity express train, has been promising higher-speed transit to South Florida tourists and locals for years. But its first few months have been underwhelming. Few customers have traveled between West Palm Beach and Fort Lauderdale, car traffic has been slowed at railway intersections, station openings have been delayed, and six fatal accidents have occurred, two of them within a single week.

In late March, the company began running test rides between Fort Lauderdale and Miami, the latest link of the train service's planned 240-mile route. But nearly six weeks and one fatality later, when Brightline has still not announced a commercial opening (though there is a "media ride" out of Miami planned for this Friday), Miami residents are wondering: What exactly is going on with Brightline? Why are they taking so long, and what are they doing to avoid future collisions, injuries, and deaths?

Brightline spokespeople declined to speak by phone, but in an email to New Times, they provided the following statement about safety:


The safety of our guests, teammates and those interacting with the railroad is Brightline's top priority. Through engineering, education and enforcement, we've been working throughout South Florida to raise awareness on how to stay safe around active railroad tracks. There is one clear message, and that's to stay off train tracks. Do not go under or around the gates when they are in the down position and only use designated crossings to cross.

Brightline has attempted to spread the stay-off-the-tracks message through what it calls an "aggressive" awareness campaign. The private train company has distributed some 92,000 flyers around South Florida school districts and neighborhoods. It also produced public service announcements in collaboration with the Miami Heat that play on radio stations in English, Spanish, and Kreyol.

Last year, the train service partnered with Operation Lifesaver, a nonprofit dedicated to public awareness and injury prevention on and around railroad tracks. As of now, about 40 Brightline employees are trained to talk about rail safety as Operation Lifesaver volunteers, and the company has hosted 14 workshops with local first responders.

The firm also began stationing so-called safety ambassadors at high-traffic intersections to help ensure pedestrians do not attempt to cross when a train is approaching. “We’re going to place individuals at the busiest intersections up and down the corridor to reinforce the need and to communicate obeying the traffic signals and signage that we have placed in the corridor,” Brightline CEO Patrick Goddard told CBS Miami when the firm adopted the ambassador program in January.

Now there are only ten safety ambassadors to man the 180 road-railway intersections between Miami and West Palm Beach. The ambassadors work on rotating shifts, according to Ali Soule, Brightline's director of public affairs and media relations. 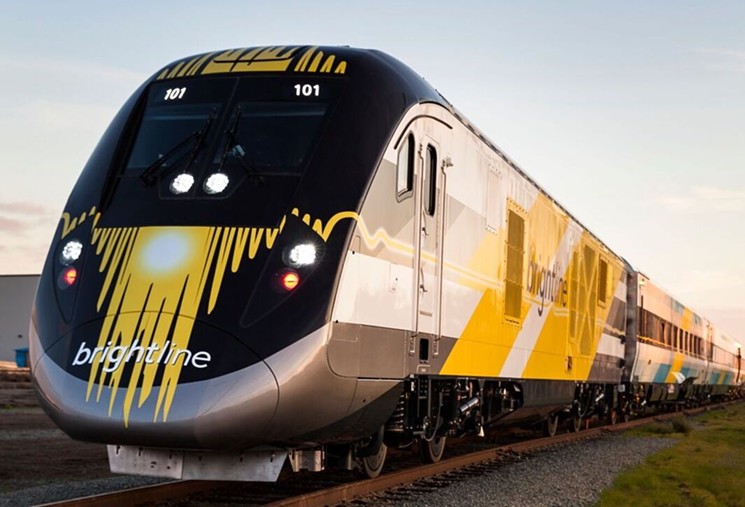 Courtesy of Brightline
"The ambassadors are focused on the crossings [and] areas between Fort Lauderdale and Miami," Soule wrote in an email to New Times. "They were doing outreach between West Palm Beach and Fort Lauderdale when we initiated service between those markets."

Concerns over safety have plagued Brightline for nearly a year. An 18-year-old woman jumped in front of a train during a test run in July 2017. Then, in November, a woman was struck by a train in Fort Lauderdale during another of the company's trial runs.

The safety ambassador program was introduced in early 2018 after two Boynton Beach residents, Jeffrey King, age 51, and Melissa Lavell, age 32, were hit by trains within a week of each other. Even after the safety ambassador initiative commenced, however, two more fatalities occurred: A West Palm Beach man was hit in March, and another died after an accident in Delray Beach in early April.

Brightline has also installed 450 cautionary signs in English, Spanish, and Kreyol advising pedestrians to stay away from the rails, and 20 variable-message signs posted at high-risk intersections between downtown Fort Lauderdale and Miami’s NE 79th Street.

But even with the safety campaign underway, it remains to be seen whether the measures, which have so far been applied only in the less populated Palm Beach and Broward Counties, will be effective in the denser downtown core of Miami-Dade. Brightline trains operate at speeds of up to 79 mph and will make nearly two dozen trips between cities each day.

“We cannot stress enough how important it is that pedestrians and drivers exercise extreme care and caution around the train tracks,” Miami-Dade Mayor Carlos Gimenez states in a Brightline rail safety release. “This is a call to the entire community to learn and follow the safety rules, and to make it a habit to make safe choices.”
KEEP MIAMI NEW TIMES FREE... Since we started Miami New Times, it has been defined as the free, independent voice of Miami, and we'd like to keep it that way. With local media under siege, it's more important than ever for us to rally support behind funding our local journalism. You can help by participating in our "I Support" program, allowing us to keep offering readers access to our incisive coverage of local news, food and culture with no paywalls.
Make a one-time donation today for as little as $1.