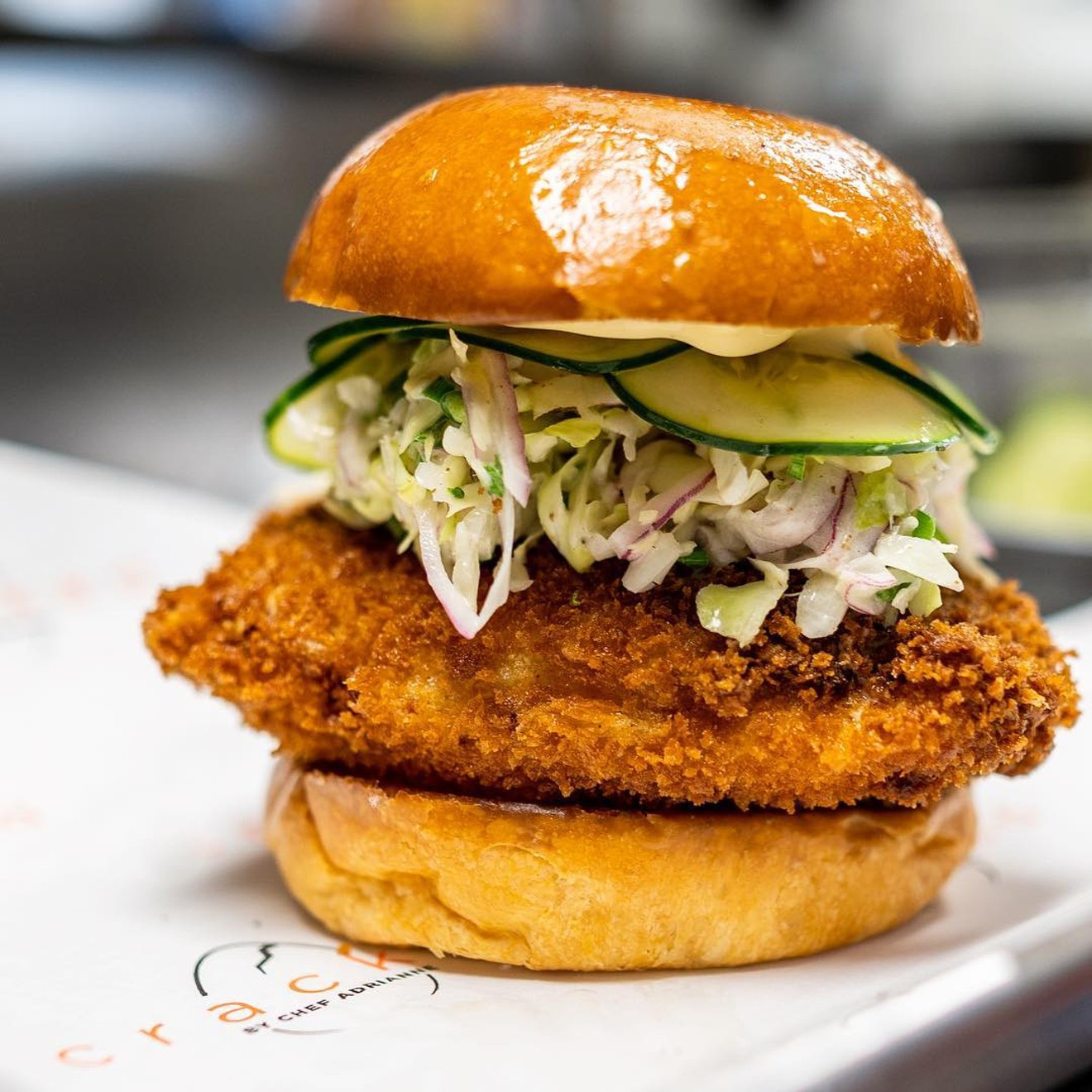 The fried chicken sandwich at Cracked. Yumbrella
Weeks after the Citadel opened in Little River and the Lincoln Eatery debuted in Miami Beach, yet another food hall is ready for business. Yumbrella, led by food truck organizer and restaurateur Steve Simon, is now open in South Miami. The name pays tribute to a South Miami food hall that thrived more than four decades ago.

In the 1970s, Yumbrella opened as one of Miami's original food halls, bringing together various cuisines — including German, Italian, and Latin — under one roof. The premise at the modern-day Yumbrella is the same, uniting a handful of popular Miami eateries, including King of Racks BBQ, Dr. Limon, and a concept by chef Adrianne Calvo of Chef Adrianne's Vineyard Restaurant & Bar.

“We are putting a twist on the food hall, and we want this to be an experience for every guest that walks through our doors," Simon says. "Sit down, relax, and enjoy great food, great drinks, and even some entertainment."

Located at Shops at Sunset Place, the 6,500-square-foot space includes seven stalls, a stage for music and performances, and a private room for events. Read on for a look at each of concepts.

Cracked by Chef Adrianne: Anchoring Yumbrella, chef Adrianne Calvo's Cracked, which also operates at the Wharf on the Miami River, offers a slate of breakfast and lunch sandwiches. Look for Calvo's fried chicken sandwich, served with house-made slaw and secret "cracked" sauce on a Zak the Baker brioche bun.

The fried chicken sandwich at Cracked.
Yumbrella
Noods: Think of this spot as a modern noodle bar creating savory bowls with different meats, spices, and vegetables. Look out for the roast pork chow mein.

The Tonic: central bar, the Tonic, serves craft cocktails like the Doc Holiday Old Fashioned and the Tonic Daiquiri.

Yumbrella. 5701 Sunset Dr., South Miami; 305-397-8499. Sunday through Thursdays 11 a.m. to midnight; Fridays and Saturdays 11 a.m. to  2 a.m.
KEEP MIAMI NEW TIMES FREE... Since we started Miami New Times, it has been defined as the free, independent voice of Miami, and we'd like to keep it that way. With local media under siege, it's more important than ever for us to rally support behind funding our local journalism. You can help by participating in our "I Support" program, allowing us to keep offering readers access to our incisive coverage of local news, food and culture with no paywalls.
Make a one-time donation today for as little as $1.