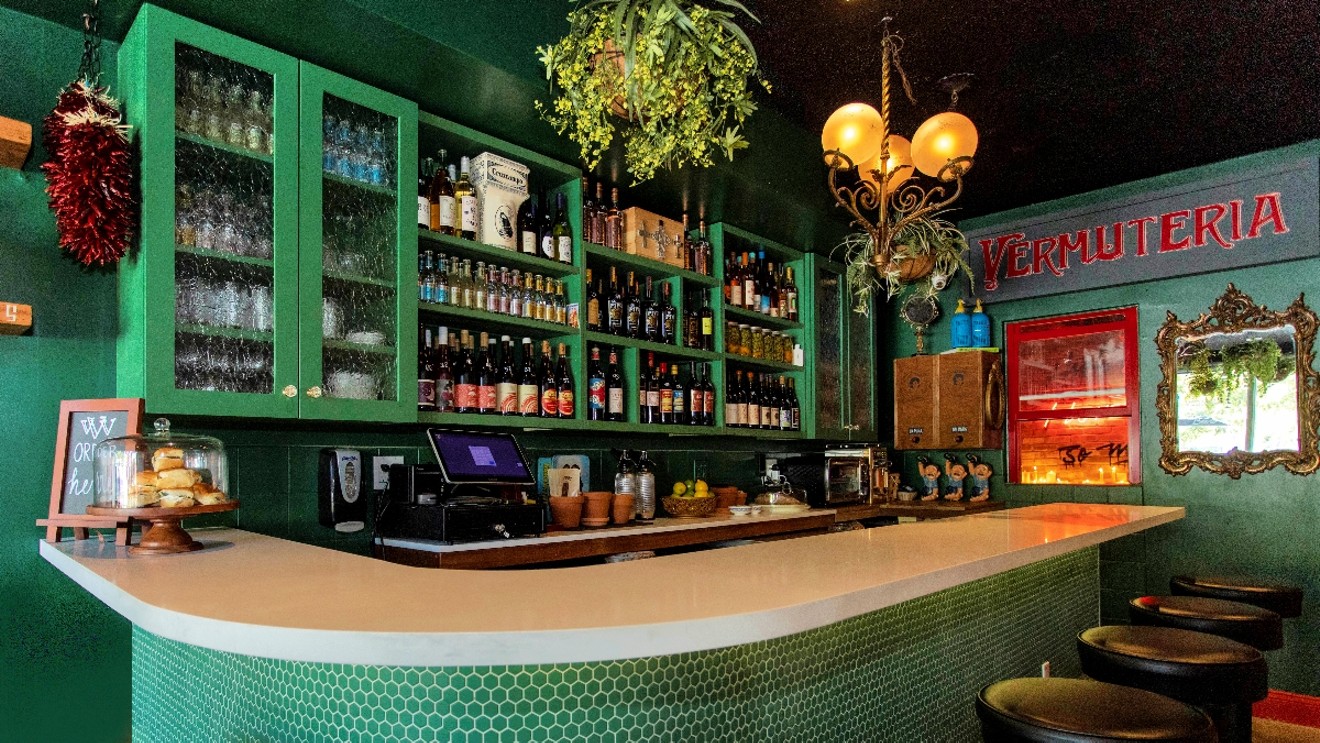 The bar at Victoria’s Vinos y Vermuteria Kush Hospitality photo
In 2011, Matt Kuscher opened his first restaurant, LoKal, offering burgers made with grass-fed Florida beef and craft beer. At the time, Miami didn't have a large beer scene, and Kuscher took a gamble that people would be interested in brews made with care from small breweries. The little restaurant took off, becoming a hub for beer lovers who wanted a taste of the latest and greatest fresh beers.

Now, Kuscher hopes Miamians with a sense of adventure will explore the world of vermouth with him at Victoria’s Vinos y Vermuteria (VVV). Kuscher has transformed his Vicky's House Milkshake Bar into an intimate 25-person space.

Kuscher says he discovered vermouth while traveling through Spain in his 20s. When he visited Italy and revisited Spain this past summer, that passion grew. "That's when I took it to the educational level. I took it as more of something that I wanted to pursue."  Kuscher had previously put his toe into the vermouth water, so to speak, at his now-closed Cafe Kush in Miami's MiMo District, by offering housemade vermouth. "I played with vermouth at Cafe Kush and the response was fantastic. It just wasn't the focus there."

When Kuscher decided to transform his milkshake shop, he was looking for a mature, sultry space to compliment and contrast the friendly beer-centric ambiance of LoKal, which is located next door. "I wanted to create something unique and creative, not just another wine bar." So, Kuscher decided to offer vermouth.

Vermouth is a fortified wine, flavored with botanicals. In the United States, it's most popular in martinis, but in Europe, vermouth is enjoyed over ice or with a splash of soda or tonic. Vermouth is rising in popularity for its vast flavor profiles that range from herbaceous to floral to sweet. Since it's a wine, it's also lower in alcohol content than spirits such as vodka or tequila.

Kuscher says that he's not expecting a sudden wave of vermouth drinkers in Miami. "99.9 percent of the population is not going to understand what we're doing. I'm not expecting people to fall in love at first taste. If you like going to the next new clubstaruant, maybe this isn't for you."

What he is trying to achieve is to create a cool space where people can try something new. "I want people to be in a cool, sexy environment and maybe learn something."

Beverage director Cristina Suarez is on hand to introduce guests to the various vermouths available. "Cristina is the first woman to open up a vermouth bar in the country," says Kuscher, adding, "She's been researching this."

VVV will also offer a selection of wines and Spanish ciders, along with a selection of tapas-style small plates, charcuterie boards, tea sandwiches, caviar, and other bites.

Whether or not the little bar starts a vermouth trend in town, Kuscher says the ultimate goal is just to have people enjoy an evening with friends with a cool, European vibe. "I always wanted to retire in Spain and sip vermouth. Since I have no desire to retire right now, it's bringing  a bit of Spain to Miami."

Victoria’s Vinos y Vermuteria. 3190 Commodore Plaza, Coconut Grove; kushhospitality.com. Wednesday to Sunday 5 p.m. to close.
KEEP MIAMI NEW TIMES FREE... Since we started Miami New Times, it has been defined as the free, independent voice of Miami, and we'd like to keep it that way. With local media under siege, it's more important than ever for us to rally support behind funding our local journalism. You can help by participating in our "I Support" program, allowing us to keep offering readers access to our incisive coverage of local news, food and culture with no paywalls.
Make a one-time donation today for as little as $1.