Miami's First Vegandale Festival Was Hot in More Ways Than One 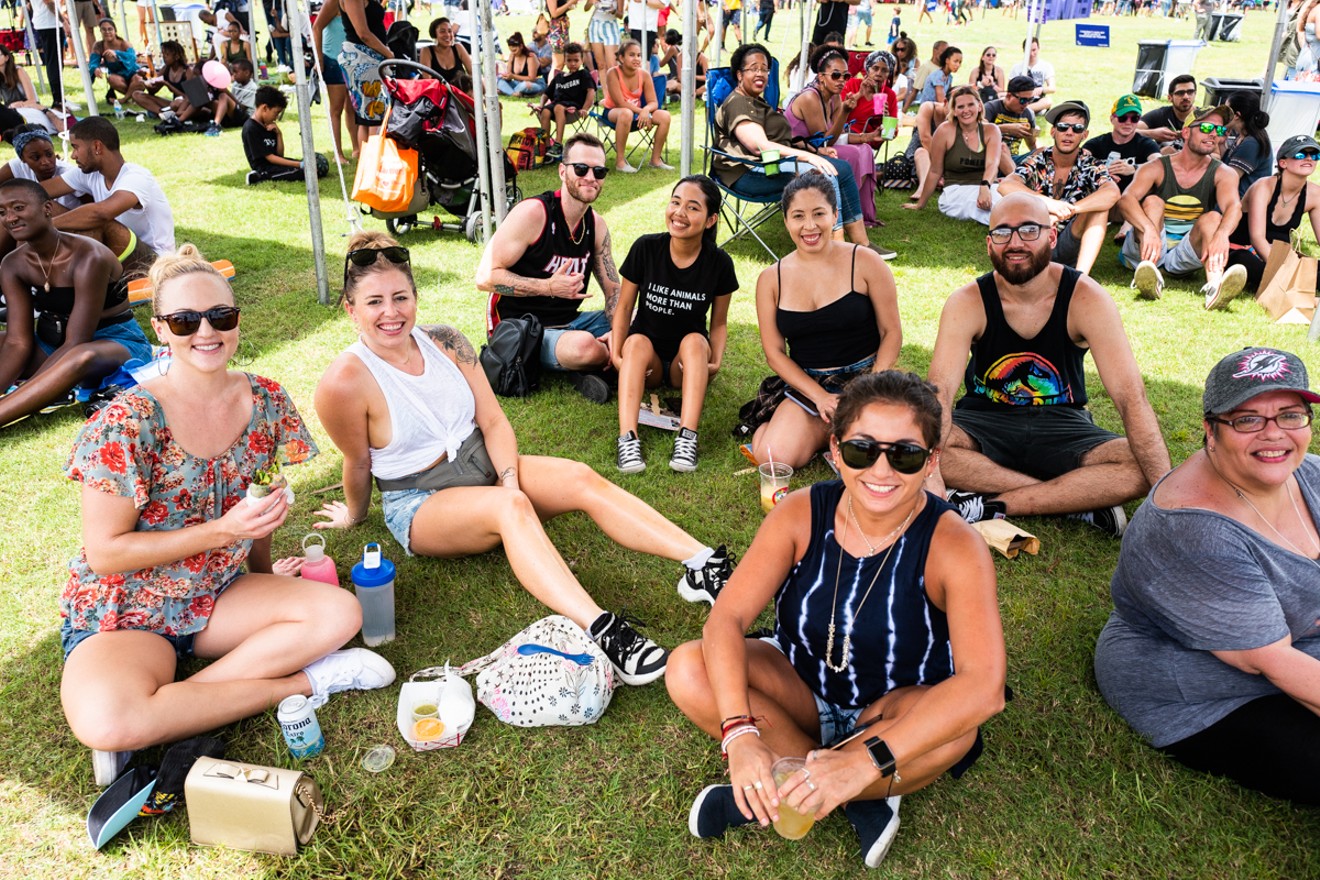 Though the skies threatened rain for most of the morning, there was none in sight as thousands of people gathered to sample meatless food from local and national restaurants.

The heat, however, was sweltering. Many attendees had to park at Miami Marine Stadium and walk the mile to Virginia Key in temperatures that reached into the 90s. The festival organizers tried to stave off the sun, though, by providing a lineup of shade tents facing the stage and offering free water bottle refills. Other areas provided picnic tables, and a last-minute email to ticketholders reminded them to bring swimsuits to take advantage of the festival's waterfront location. 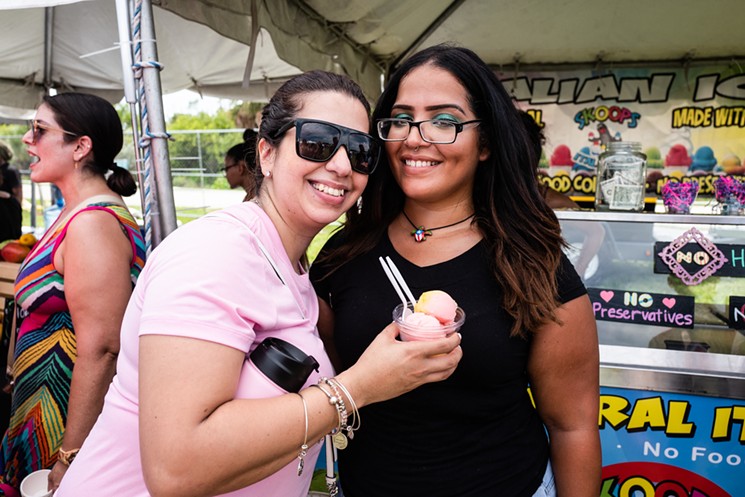 Cooling off at Vegandale. See more photos from Vegandale at the Historic Virginia Key Beach Park here.
Danielle Mía
The weather, however, proved fortuitous for the many vendors selling refreshing treats. The lines for Italian ice and lemonade were particularly long as happy vegans tried to cool off.

Planta's Benjamin Goldman, who was offering the restaurant's sliders as well as mac 'n' cheese, was determined to stay cool. "Florida weather is what I grew up in," the chef said. He was pleased with the turnout at Vegandale and said the afternoon was "a combination of perfect weather and perfect food." 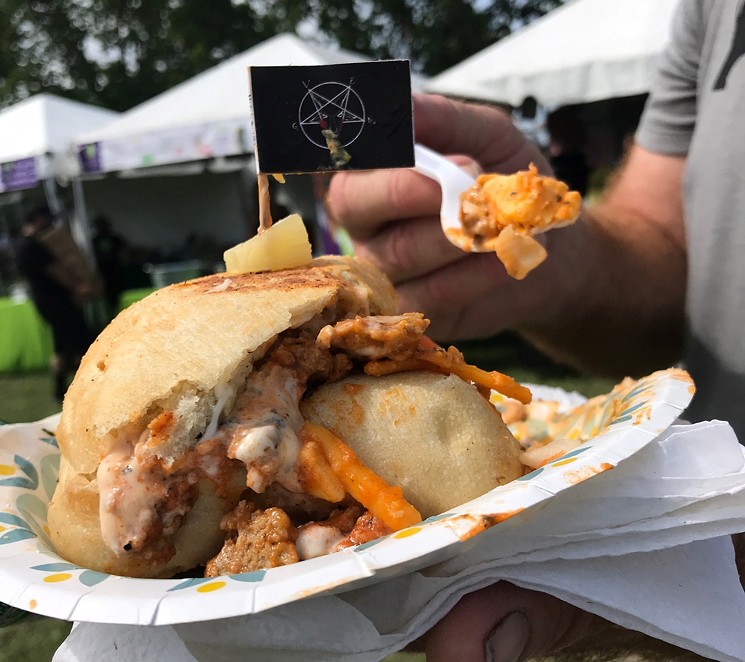 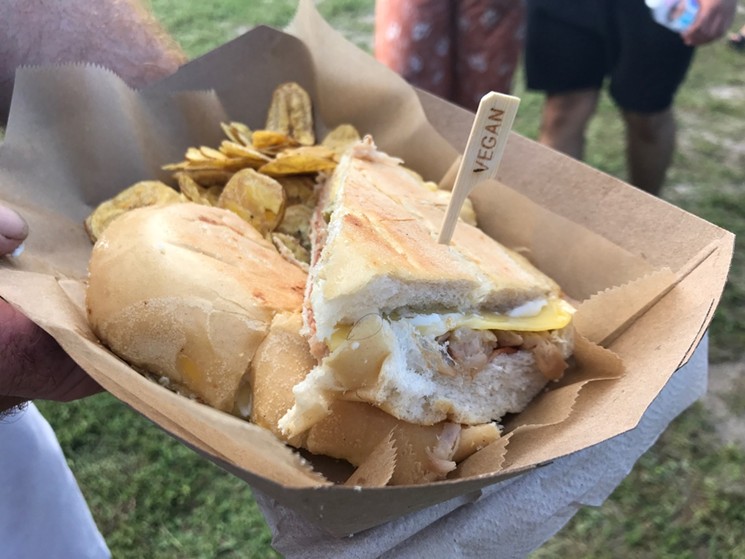 Vegan cubano. See more photos from Vegandale at the Historic Virginia Key Beach Park here.
Laine Doss
Two South Florida eateries served vegan Cuban food, and it was a hit. The Spanglish Vegan sold out of its vegan piña coladas and Conchita fritas. Vegan Cuban Cuisine was cleaned out of its plant-based croquetas, and a vegan cubano proved to be a flavorful alternative to its ham-based cousin.

Between songs, a DJ announced upcoming Vegandale events, including one in Toronto in August and one in New York City at the end of September. The festival is a welcome addition to the ever-growing event scene in Miami, but holding it in the winter would make chowing down on vegan comfort food such as fried chicken, mac 'n' cheese, and cuban sandwiches much more appealing.
KEEP MIAMI NEW TIMES FREE... Since we started Miami New Times, it has been defined as the free, independent voice of Miami, and we'd like to keep it that way. With local media under siege, it's more important than ever for us to rally support behind funding our local journalism. You can help by participating in our "I Support" program, allowing us to keep offering readers access to our incisive coverage of local news, food and culture with no paywalls.
Make a one-time donation today for as little as $1.