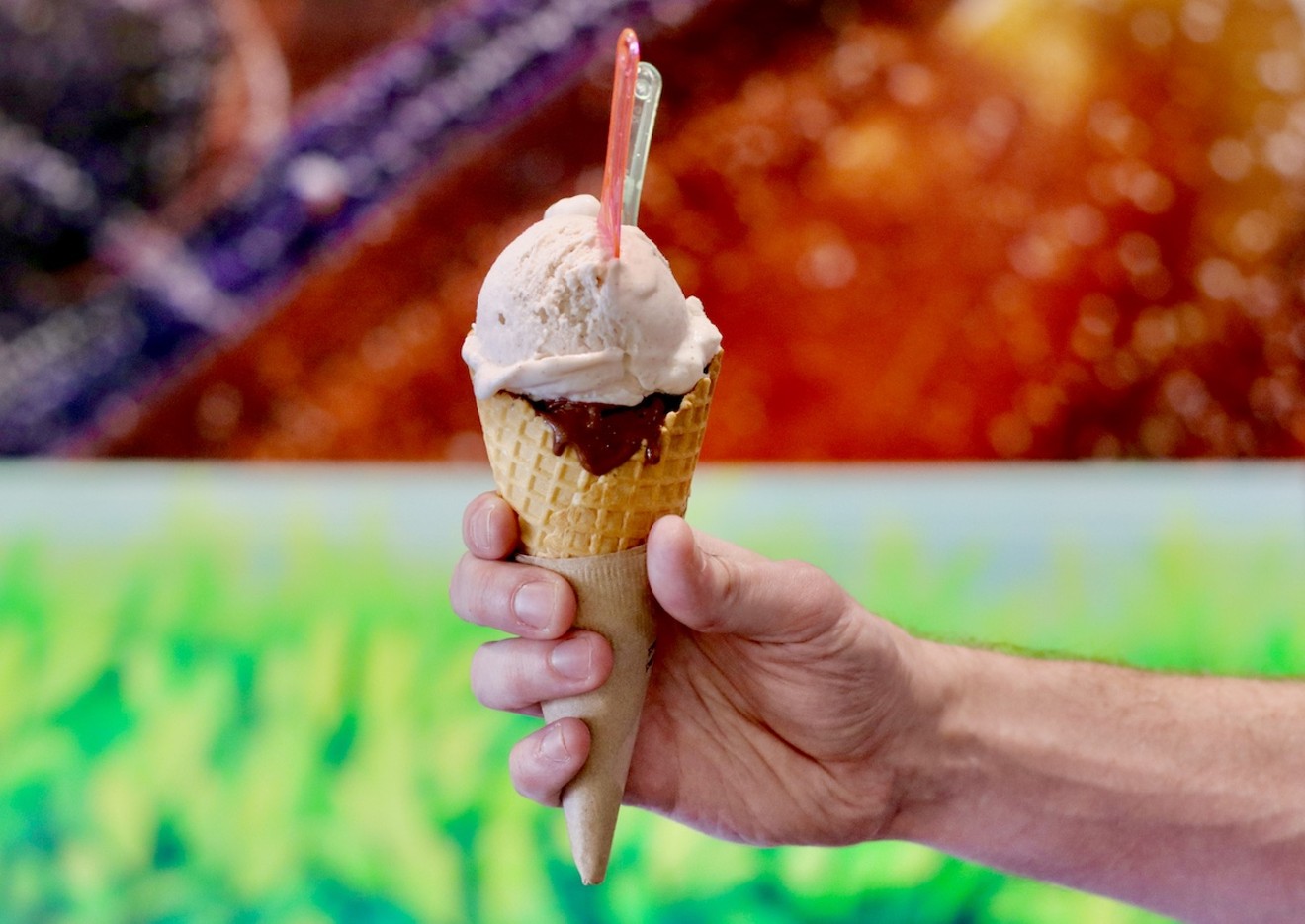 V Gelato is making Miami's best vegan gelato — and some flavors are spiked with spirits, too. Photo by Nicole Danna
V Gelato chef-owner Eric Dorval likes to wait until customers take the first taste of his frozen dessert before he announces that everything they’ve just tasted is 100 percent vegan.

“Most of them can’t believe it. At least 50-70 percent of people don’t even realize it’s dairy-free,” Dorval tells New Times, adding his mission has been to create vegan gelato that could stand up to the traditionally dairy-based dessert in terms of both flavor and — perhaps, more importantly — texture.

Dorval first started making gelato in 2014 in his home country of Canada. After graduating from the Institut de Tourisme et d'Hôtellerie du Québec with a professional pastry degree, he aimed his talents at perfecting the frozen Italian dessert, working his way from apprentice to head chef at Vancouver’s well-known Bella Gelateria.

He further honed his skills at Carpigiani Gelato University, a school outside Bologna, Italy, dedicated to the art of frozen dessert making.

Today, the award-winning chef has several titles to prove his dedication to the craft, including a gold medal at the 2018 Chicago Gelato Festival America.

Dorval is especially proud of the bronze medal he took home at Florence’s 2018 Birrificio Angelo Poretti Beer Gelato Challenge, where he crafted a winning amber-ale-beer gelato that placed him among some of Italy’s most talented gelatieres.

Although he's not a vegan, the chef quickly took an interest in creating plant-based gelato when his wife, Namyi, later developed a lactose sensitivity that required her to give up all things dairy.

“It began with a mango gelato made with coconut milk. My wife loved it so much, she told me I should open my own shop,” says Dorval, who relocated to Florida late last year in search of a warmer climate.

Without missing a beat, the couple began the process of opening V Gelato. Now, their three-month-old Wynwood gelateria serves a rotating selection of Dorval's desserts alongside a menu of coffee that makes for sublime affogato.

Thanks to his choice of top-notch equipment and a coconut- and oat milk-based recipe, V Gelato is just as Dorval promises: spreadable, dense, and silky.

“Texture is so important when it comes to gelato. The goal is to make the gelato as creamy as possible,” says Dorval. “And it should never have ice crystals that give that grainy consistency.”

The most popular signature flavor is the chef’s take on dulce de leche, a coconut and sugar reduction he renders down in classic dulce de leche fashion, resulting in a rich, buttery caramel. Currently, upcoming flavors include kale banana pineapple, pistachio, and a date and almond crunch.

More experimental flavors include a salted white truffle caramel gelato created for Michelin-starred Hiden, and a jalapeño and honey that changes from sweet to spicy and ends with a hint of honey.

Recently, Dorval says he's been experimenting with various spirits, offering adult-only, dairy-free gelatos. They include his “Ghost Coquila” — a coquito-flavored gelato spiked with Ghost tequila instead of rum, and a guava pink prosecco made with Zonin prosecco.

“As a gelato chef who has built somewhat of a reputation making an award-winning beer gelato, I decided to continue the theme with our 21-and-older flavors,” sums up Dorval. “Not being vegan myself, I work extremely hard to make sure I’m using the right ingredients so people can trust we are 100 percent animal free, top quality, and without trigger allergens while offering them the same selection and quality you’d find with dairy-based desserts.”

V Gelato. 317 NW 25th St., Miami; 786-452-1080; instagram.com/vgelatomiami. Monday through Thursday noon to 10 p.m., and Friday through Sunday noon to 11 p.m.
KEEP MIAMI NEW TIMES FREE... Since we started Miami New Times, it has been defined as the free, independent voice of Miami, and we'd like to keep it that way. With local media under siege, it's more important than ever for us to rally support behind funding our local journalism. You can help by participating in our "I Support" program, allowing us to keep offering readers access to our incisive coverage of local news, food and culture with no paywalls.
Make a one-time donation today for as little as $1.