The Ten Most "Miami" Things to Eat and Drink 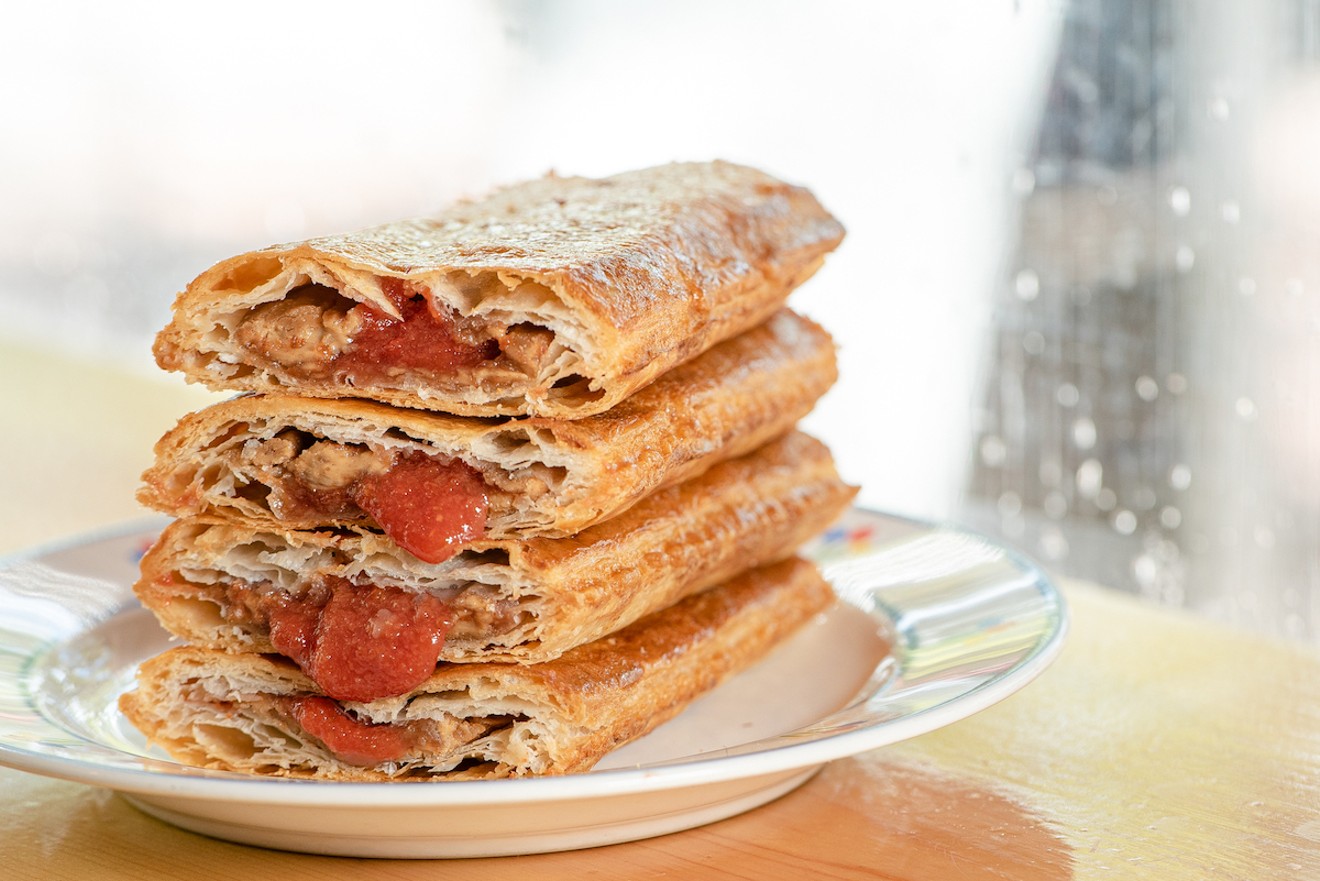 Pastelitos at Chug's Diner Photo courtesy of Chug's Diner
There's no denying Miami's food scene is hot. Restaurateurs from New York, London, and other major cities are opening outposts in the Magic City, while local chefs create innovative venues to showcase their talents.

But what makes any city a truly great culinary destination is its iconic items. New York has its pizza and bagels, Chicago its Italian beef and Chicago dogs, New Orleans its beignets and gumbo.

Miami's trademark foods take inspiration from its seaside location and Cuban cultures to create a diverse cornucopia of treats that practically beg to be eaten.

Whether you're chilling poolside in Miami Beach, beating the heat in Brickell, or day-drinking in Doral, we've got you covered with this roundup of food and drink that qualify as local favorites and "must tries" for visitors.

Various locations
nightowlcookieco.com
Night Owl, the late-night cookie purveyor with a rabid fan base, offers a plethora of different cookies on its menu. But one stands out from all the rest as the ultimate Miami choice: the Ave Maria. Founder Andrew Gonzalez created the cookies as an ode to the Magic City. This mouthwatering combination of guava cookie dough and white chocolate chips is topped with Maria cookie crumbles and guava chunks and finished with a cream cheese drizzle. The cookie combines the traditional Cuban flavors of guava, cream cheese, and Maria cookies into a modern treat.

Cafecito at Versailles
Photo by Sips With Cel

3555 SW Eighth St., Miami
305-444-0240
versaillesrestaurant.com
Miami's famed Cuban restaurant Versailles has been serving classic Cuban cuisine on Calle Ocho since 1971. It is safe to say there's nothing more Miami than stopping by this venerable establishment for a café cubano (AKA Cuban coffee) — that tiny, sugar-sweetened espresso drink that provides an instant shot of energy — from the ventanita, the restaurant's walk-up coffee window on SW Eighth Street.

15980 SW 248th St., Homestead
305-247-0668
knausberryfarm.com
Scoring one of the first Knaus Berry cinnamon rolls of the season (the farm annually closes from May to October and is closed on Sundays) has become a foodie right of passage since Ray Knaus' wife, Barbara, began making her giant cinnamon rolls in the 1960s. Today, lines begin to form at 8 a.m. and persist until the day's batch is sold out. Get 'em while they're hot, and you can count yourself an official Miamian.

13695 SW 26th St., Miami
305-559-6666
islascanariasrestaurant.com
This family-owned and -operated restaurant, established in 1977 by the late Raul and Amelia Garcia, is now run by their daughter, Nancy Andrade, her husband Luis, and their children, Jonathan and Eileen. For decades, Islas Canarias has served locals and tourists alike, preparing traditional dishes made according to the family’s original recipes from Cuba. The pinnacle: Raul's classic ham croqueta, a creamy mix of béchamel and smoky specks of pink ham covered in golden breadcrumbs.

7 SW Eighth St., Miami
305-539-0969
sanguich.com
This tiny sandwich shop in Little Havana is best known for its made-from-scratch eats and fresh fruit batidos (milkshakes). Sanguich de Miami churns out a variety of gourmet sandwiches, but it's the cubano that stands out. Here, ingredients from ham and pork to mustard and pickles are prepped and cooked in-house. As a result, this Cuban bears the same flavor profile as the classic while boasting subtle enhancements that make it a notch above the rest. Sweet ham is layered atop savory, fat-rimmed slices of pork, while dense chewy bread is slathered with fresh, tangy mustard and crisp pickles, combining for one of the best Cubans in the city.

1821 SW Eighth St., Miami
305-644-6054
elreydelasfritas.com
At El Rey de las Fritas on Calle Ocho, the Cuban hamburger is king. Known as the frita cubana, the burger pairs a spicy beef patty with shoestring potatoes, onions, and ketchup, stuffed inside a Cuban-style bun. El Rey, a locally owned restaurant chain that has expanded with several locations across Miami since its debut in 1982, serves classic fritas and batidos for a very Miami take on the all-American burger-and-a-shake lunch.

1547 SW Eighth St., Miami
786-313-3919
instagram.com/_panolos
Put longtime Union Beer Store bartender and marketing guru Adrian Castro on a desert island and the one food he'd request is a pan con bistec. Late-night college eats are part of the inspiration behind this self-taught chef's take on the quintessential Cuban steak sandwich. What began as a way to provide food to Union patrons during the first phase of its mid-pandemic reopening has evolved into a community pop-up serving up a perfect iteration of the sandwich: slabs of fresh-grilled steak topped with raw onion, shredded fried hash browns, and fresh-baked local Cuban bread, slathered with a house-made aioli.

3444 Main Hwy., Miami
786-353-2940
chugsdiner.com
Only in Miami do pastelitos come in a variety of flavors, from the archetypal guava-and-cheese to coconut and even crab. But there's really nothing that compares to the ones made by Giovanni Fesser, the former Ariete sous chef and founder of Pastelito Papi who is making some of the city's best meat- and fruit-stuffed pastries. While Fesser hosts a number of pop-up shops across the Miami area, find his pastelitos full-time at Chug's Diner in Coconut Grove, where you can choose from fillings like mamey, guava and queso, and PB&J or savory options like ropa vieja, picadillo, and Buffalo chicken.

55 NW 25th St., Miami
786-362-6300
vezasur.com
Crafted to appeal to IPA lovers and non-IPA lovers alike, Veza Sur's full-bodied, easy-drinking IPA features a brilliantly fresh hop aroma thanks to a combination of Amarillo and Citra hops. What makes it a South Coast (and not Northeast or West Coast) IPA? The beer's low bitterness, which is perfectly balanced by a full malt backbone and a high-registering 7.5 percent ABV backed by just 40 IBUs, is a tropical and refreshing take on the classic beer style.

11 Washington Ave., Miami Beach
305-673-0365
joesstonecrab.com
You know Joe’s — the history, the gloriously sweet stone crabs, the notoriously long wait for a table. Here, tuxedoed waiters whirl through the dining rooms with oval trays held high above their heads while the buzz of diners subtly stirs the air. Stone crabs are, of course, the mainstay of Joe’s menu, and somehow they seem to taste a little fresher and sweeter here. But don't neglect to finish your meal with a slice of key lime pie — at Joe's, you can revel in two Miami classics in the same meal.
KEEP MIAMI NEW TIMES FREE... Since we started Miami New Times, it has been defined as the free, independent voice of Miami, and we'd like to keep it that way. With local media under siege, it's more important than ever for us to rally support behind funding our local journalism. You can help by participating in our "I Support" program, allowing us to keep offering readers access to our incisive coverage of local news, food and culture with no paywalls.
Make a one-time donation today for as little as $1.