Shaquille O'Neal Photo by Alive Coverage
Super Bowl LIV is only days away, and 150,000 people are expected to converge on the Magic City — a number more than twice the seating capacity at Hard Rock Stadium.

Most of these fans will come for the parties and events that include concerts by Lady Gaga and Lizzo, yacht charters, pop-ups, the Super Bowl Experience, and a lot of corporate sponsored happenings.

Though many of these parties are overpriced money grabs, a few of them benefit charities. Ticket prices are still steep, and if you're a Miamian who complains about the high cost of a day at Disney World or the South Beach Wine & Food Festival, you might want to just go to Trader Joe's and stock up on supplies.

But if you've got deep pockets or plenty of credit and want to eat and drink with pro athletes and celebrities, here are the premier events that will actually make a difference long after one of the teams declares victory Sunday night. Any party Shaq throws is huger than huge.
Photo by Stijn De Grauwe

On the heels of the tragic helicopter accident that took the lives of Kobe Bryant, his daughter Gianna, and seven other people, Shaquille O'Neal issued the following statement on Instagram:

Been going back and forth for the past couple of days on if I should even have my event in Miami this weekend. Part of me wanted to stay to myself as I reflect why my brother and his family mean to me and my family. But in thinking what would Kobe want, what would he do? Kobe would want us to push through and celebrate life. So let's do just that. I'll be dedicating and donating all my proceeds from Friday night's Fun House to all the families who lose loved ones and to the Kobe and Vanessa Bryant Foundation. Together we will celebrate all those who lost their lives in Sunday's tragedy. RIP my brother, my friend, and my homie. The Black Mamba, Until we meet again. 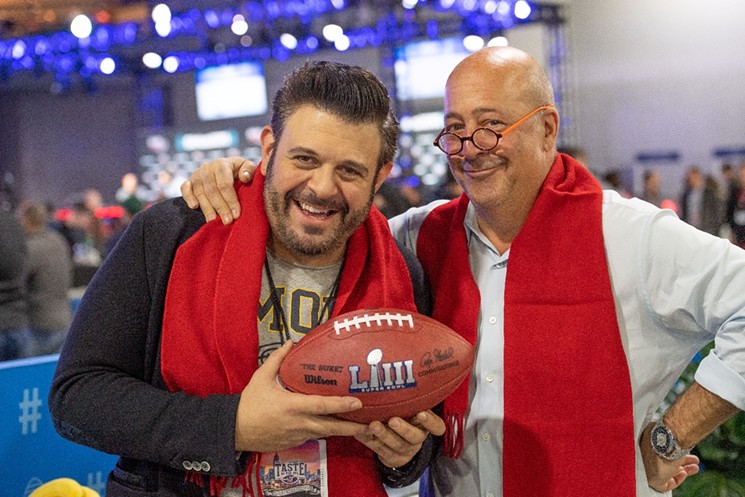 Adam Richman and Andrew Zimmern
Courtesy of Taste of the NFL

Taste of the NFL

This traveling event shows up each year at the Super Bowl host city. Billed as "a party with a purpose," Taste of the NFL is actually a 501(c)3 nonprofit organization whose founder, Wayne Kostroski, was named the James Beard Humanitarian of the year in 2010 for raising money through the annual event for food banks across the nation. According to its website, Taste of the NFL's efforts have resulted in donating 200 million meals to families across the United States. Admission is pricey, but attendees can sample fare from more than 40 chefs from around the country while hobnobbing with celebrities and sports figures such as Andrew Zimmern, Adam Richman, and Don Shula. 7 p.m. Saturday, February 1, at the Diplomat Beach Resort, 3555 S. Ocean Dr., Hollywood. Tickets cost $700 via tasteofthenfl.com.

If you don't have tickets to the big game but want to hang out close to the action, the Players Tailgate is for you. Hosted by celebrity chef Guy Fieri, this event will happen just a few hours before kickoff in a 2.5-acre area only four blocks from the Super Bowl security perimeter around Hard Rock Stadium.

Though traffic might be a nightmare, the event promises food from a host of chefs, including Todd English, Top Chef's Antonia Lofasa, James Beard winners Jamie Bissonnette and Ken Oringer, local favorite Richard Hales, and others. More than 30 NFL players, celebrities, and athletes are expected to eat and drink with guests.

Proceeds from tickets will go toward Operation BBQ Relief and the Irie Foundation. Operation BBQ Relief responds to natural disasters and other situations to help feed displaced residents and emergency personnel. The Irie Foundation works year-round to help at-risk youth. 2 to 5 p.m. Sunday, February 2, at NW 27th Avenue and 191st Street, next to 24 Hour Fitness, Miami Gardens. Tickets cost $875 to 20,000 via bullseveeventgroup.com.
KEEP MIAMI NEW TIMES FREE... Since we started Miami New Times, it has been defined as the free, independent voice of Miami, and we'd like to keep it that way. With local media under siege, it's more important than ever for us to rally support behind funding our local journalism. You can help by participating in our "I Support" program, allowing us to keep offering readers access to our incisive coverage of local news, food and culture with no paywalls.
Make a one-time donation today for as little as $1.