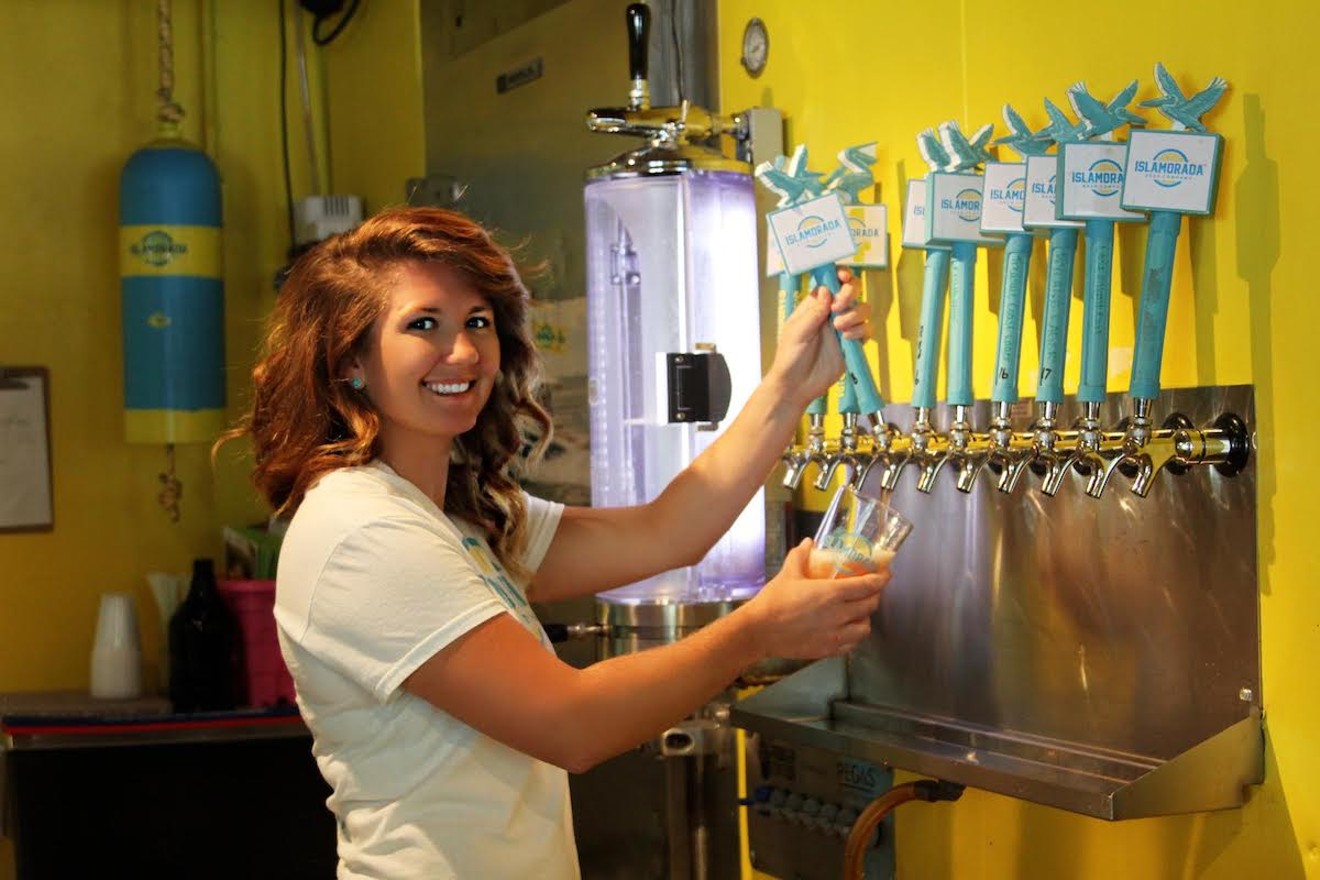 Women have been brewing beers since the days of ancient Egypt, where it was considered a woman's job. In Germany, it was a nun who discovered hops would help give beer a longer shelf life. And, in medieval England, women were responsible for brewing beer for their family and land workers to swig throughout the day.

Sure, brewing beer might have been just another daily chore for many women back in the day, but today it's becoming an emerging career and rewarding vocation, providing women brewsters – a medieval term for a female brewer – a chance to be a larger part of what has become a largely male-dominated industry.

This Memorial Day weekend, some of the leading ladies of the country's craft beer industry will be gathering in Fort Lauderdale for what is being hailed as the nation's first all-female beer fest. On May 28, the local women's advocacy group the Fem Collective will launch its inaugural FemAle Brew Fest, organized by Fem Collective CEO Frances Antonio-Martineau.

The festival will host a large selection of female-run breweries and woman-founded and run food or industry vendors, as well as live music by an assortment of female DJs. First and foremost, brewers in attendance will include nationally-recognized names like Emily Thomas, cofounder, owner, and brewer of Santa Cruz Mountain Brewing; Erin Cox, quality assurance manager for Great Divide Brewing Co.; and Lauren Zeidler, director of quality for Ballast Point.

Locally, the roster of guest speakers and presenting brewers will also include the four local ladies of craft beer, each who've found a home brewing suds in South Florida. 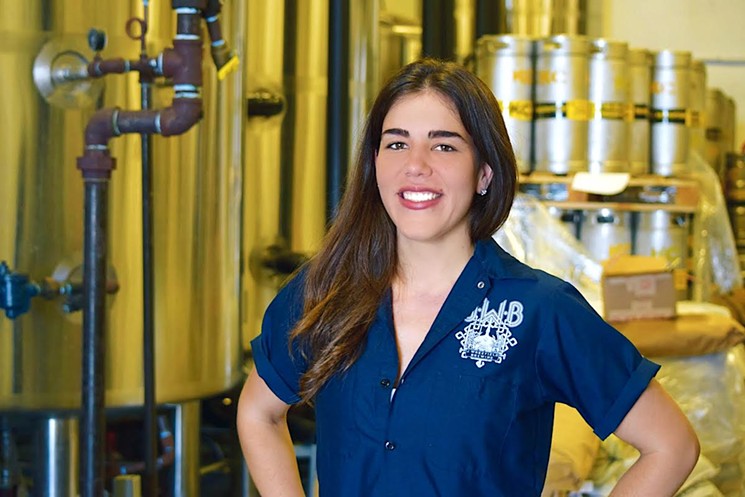 Two years into the job, however, the brewer says she doesn’t look at her title as one of South Florida's first female brewers as something to distract from the larger message. "If you are kick-ass, then you are kick-ass, regardless of whether you are male or female. I'm a brewer first and foremost. All that matters is if you have drive, talent, and initiative."

Cabré says she's had an appreciation for craft beer ever since her first sip of Weihenstephaner Hefeweissbier, and had even done a few home brews before linking up with one of the area's most celebrated breweries. Originally, the Johnson & Wales University graduate entered the craft world as a pastry chef, with time spent at two of Miami's most iconic resorts — Fontainebleau Miami Beach and the Biltmore Hotel in Coral Gables — as well as Amy’s Bread and The Modern in New York City.

After several years and the birth of her daughter, the young talent met Johnathan Wakefield through a mutual friend. As timing would have, the award-winning home brewer was in the early stages of planning his Wynwood brewery and taproom. Impressed with Cabré's appreciation for craft beer, eagerness to learn, precision, and attention to detail — all well-established traits from her time spent in some of Miami's most prestigious kitchens — he hired her to be a part of the team responsible for creating the brewery's more experimental treatments and recipes.

Today, 34-year-old Cabré is also responsible for creating several treatments that are now some of the brewery's best-known beers, including the Haterade Stush, Orange Dreamsicle Berliner, and Emperor's Cloud green tea IPA. Recently, she gave Wakefield her very first recipe for brewing her own beer. Although she won't give details just yet, expect it to be just as innovative and out-of-the-box as all the other J. Wakefield creations.

But it's not all experimenting, stresses Cabré. Most of the job is cleaning, sanitizing, and sweating.

"It's not glamorous. When I'm mashing in, for example, there's no rakes, so I have to stir by hand. It's a very physical job," says Cabré. "But Johnathan [Wakefield] has a very creative mind — he loves food — so we're very like-minded in that sense. We like to do our own thing here, and that's very freeing. It's also what sets us apart." 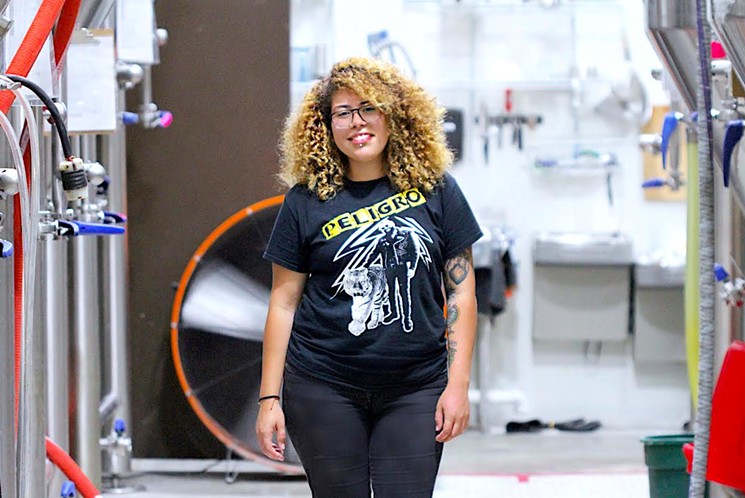 "But I knew I wanted to do more. I wanted be more hands on," says Castro. "So I approached both the brewers and told them I wanted to start working part-time in the back of house. It was intimidating at first, working with these talented brewers, but now I'm learning from some of the best in the business."

Today, Castro holds the title of assistant brewer, working alongside a four-person team responsible for creating MIA's core brands, its new HRD WTR hard seltzer, and the dozens of specialty beers available on draft at the Doral taproom. Since starting just over one year ago, her job duties have grown from basic cellar work like cleaning kegs, filtering beer, and harvesting yeast to brewing.

That includes two taproom releases — a Scotch ale and doppelbock — as well as her first recipe, a gose she brewed in February with coriander and Mediterranean sea salt. It's currently barrel-aging with lactose until it matures to the right flavor profile, at which time Castro will treat it with fruit before launching her first beer in the MIA Doral taproom.

Inspired by her decision, cellar worker Ana Diez is following in Castro's footsteps, also learning the back of house operations. Moving forward, she'll be instrumental in helping to get MIA's new canning line up and running, which will allow for expanded distribution of the brewery's Neon white IPA, 305 golden ale, and HRD WTR.

"At MIA, we work as a team," says Castro. "There's no men versus women. We depend on each other to get the job done. Now, with all the work that goes into creating a new beer or producing one of our core beers, has only made me respect the craft on an entirely new level."

When she first moved into the area, the longtime craft beer drinker and experienced home brewer decided to get a part-time job with Islamorada's local brewery, a job she once held at Duck Rabbit Brewery in Farmville, North Carolina. But, just one year later, the young beer aficionado was doing much more than simply pouring it; she was assisting founders Tyrone Bradley, Jose Herrara, Nik Schroth, and Chris Trentine with helping to craft new recipes, tapping into knowledge inspired by her father's love of craft beer.

Today, Harper works alongside assistant brewer, Crystal Jones, who helps the 28-year-old in the back of house to produce the myriad specialty brews on draft at the Islamorada taproom. Further north, Patrick Byrnes, works as head brewer for the Islamorada Beer Company production facility in Fort Pierce.

For Harper, the goal is to create light, easy-drinking, low-ABV beers that pair perfectly with South Florida's tropical heat. While most Floridians are familiar with the brewery's core brands like the Sandbar Sunday American wheat ale and Channel Marker session IPA, you won't get a chance to sample the dozens of more creative beers Harper creates especially for the Islamorada nano-facility using a two-barrel system she helped rig herself (yes, she even installed that whirlpool in her kettle) unless you visit the Islamorada facility.

Each month, expect to find as many as a half-dozen specialty one-offs, which most recently included raspberry tart ale, hoppy mango blonde ale, American red ale, and even a Vienna-style lager. Moving forward, she hoped to brew several of her more popular recipes brewed further north in the Islamorada production brew house. Some may even become specialty bottles 6-packs, or eventually join the core lineup.

When asked about the future of the craft beer industry, Harper is optimistic. "If you have enough passion behind something, nothing will keep the craft industry from growing and flourishing. As long as people are thirsty for good beer, there will always be a place for creative, talented brewers. I live in the Keys and get to make pretty much any beer I want. It's truly a dream job."

"We started brewing together, but I became obsessed," says Roark.

It didn't take long before she was building recipes and researching different styles in an attempt to create the "best" version of each. Eventually, the novice home brewer was brewing more than her husband, and upgrading their at-home system to accommodate more ingredients. Today, she enjoys brewing all styles of beer, but gravitates towards IPAs.

In February 2017, Roark was hired by Funky Buddha Brewery founder Ryan Sentz to become a head brewer at Funky Buddha Lounge & Brewery in Boca Raton. It was the raw talent and desire to create new and different recipes that set Roark apart from others.

Today, Roark is now part of a two-person team responsible for continuing the Funky Buddha Lounge legacy of creating and brewing funky new beers using the facility's original one-barrel system, the same one that was used to create one of Funky Buddha's most popular beers, Maple Bacon Coffee Porter.

Keep an eye out for her HopStand IPA, a home brew recipe she created for an India Pale Ale brewed continuously with five different hops that clocks in at 6% ABV.