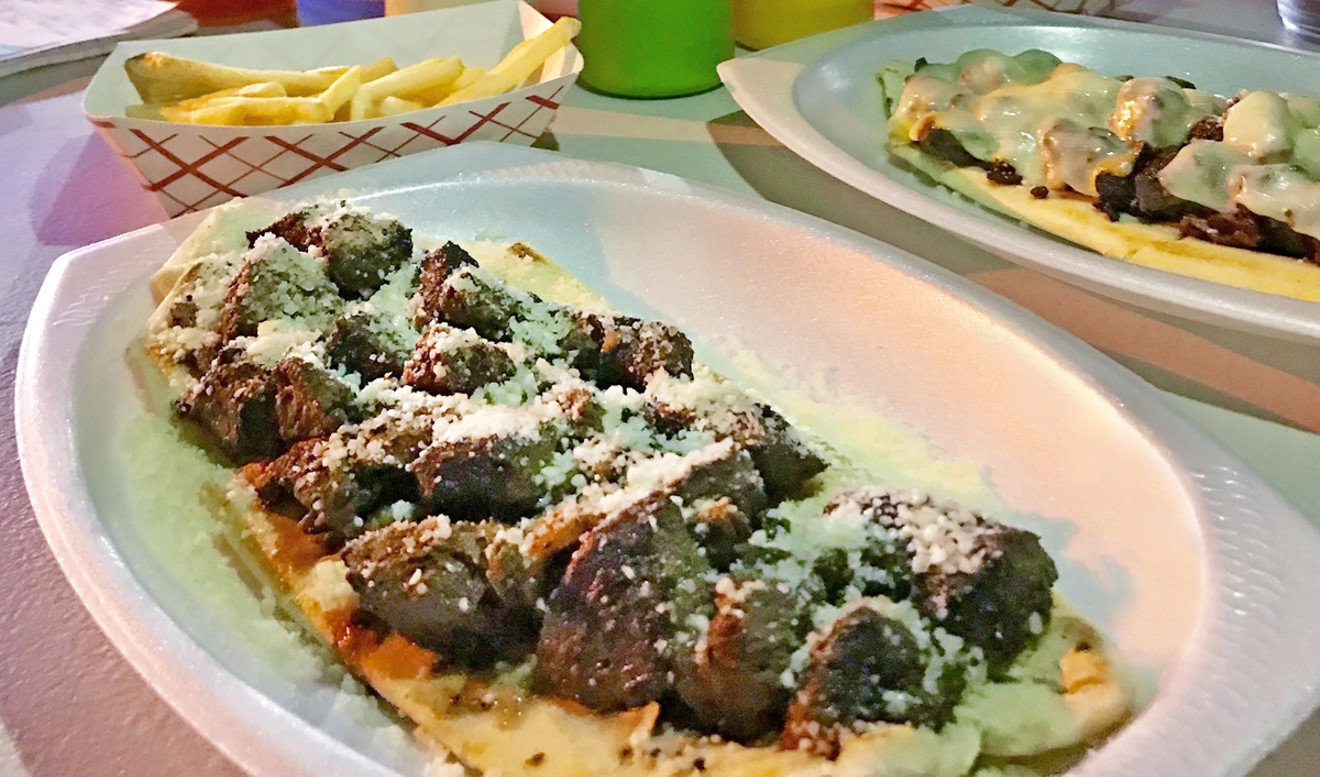 The traditional steak pepito and the francesa. Photo by Alona Abbady Martinez
Just open a little more than a month, Pepitería 13 is alive with people munching on pepitos, the sandwich served on nearly every street corner in Venezuela.

There's a national debate over what goes into a pepito. Some insist it be layered with condiments, veggies, fries, and a fried egg. Food truck owner Nicolas Cardona takes a minimalist approach to the meal, serving it in much the same way it's prepared in his hometown of Barquisimeto.

"You go to some of these places and they have the bread with tons of lettuce, those canned shoestring fries, and the whole thing drowned in sauces, and when you take a bite, you'll see there's very little meat inside," the 32-year-old explains.

Cardona's classic pepito ($12) is served on a warmed minibaguette manipulated to make it as thin as a pita but with the crunch of crusty French bread. The open-faced sandwich has kebab-size cubes of seasoned, grilled meat and slightly piquant pecorino cheese sprinkled on top. Customers can opt for grilled chicken or "mixto," both chicken and beef.

Other sandwiches include the frances ($12), with beef or chicken and bacon, prepared au gratin using a combo of Muenster and pecorino. The español adds chistorra, a Basque-style sausage considered the ultimate comfort food when served with potatoes and eggs.

"The response has been phenomenal," Cardona says, citing that more than 3,000 people arrived the first week he opened. "And nobody even really knows who I am."

He's referring to his claim to fame as a professional motorcycle racer and the only Venezuelan to have competed in the Dakar Rally, the off-road endurance event that winds from Lima, Peru, to Córdoba, Argentina. Last year, he placed third in his category.

"I've been riding motorcycles since I was 4 years old," Cardona says, "and I always wore the number 13, considered a number of good luck among many athletes in Venezuela."

The pepito business was an afterthought when Cardona would spend weekends making the sandwiches.
"Friends would throw parties, buy me the ingredients, and I would prepare all the sandwiches. Everyone would tell me: ‘You have to sell these here in the U.S.!'”

After three years, he decided to set up shop in the parking lot of Irenko, the auto sales company that's his motorcycle sponsor. Cardona's goal was to mirror the pepiterías from Barquisimeto to the final detail. With that in mind, he offers four homemade sauces dispensed from colorful squirt bottles from Venezuela.

"You can't find these here. I wanted everyone that sits down to feel like they are back home."

The salsa de maiz is one of the most popular. Made from fresh corn, it sits in a bright-yellow bottle. Queso fundido, a thick sauce of melted cheese seasoned with spices, comes in an orange container. There's also a garlic-based aioli, as well as the house sauce, "chica sexy," which tastes like tartare with extra tang.

Cardona says people are finding the truck through social media. "We've done real well with Instagram and word of mouth. We're working on a vegetarian pepito and are rolling out a new one called mar y tierra, which features steak and garlic shrimp."

He's proud to admit that one was suggested by Nacho, the Venezuelan singer and political activist, who is a regular customer. "He orders it to go a lot."