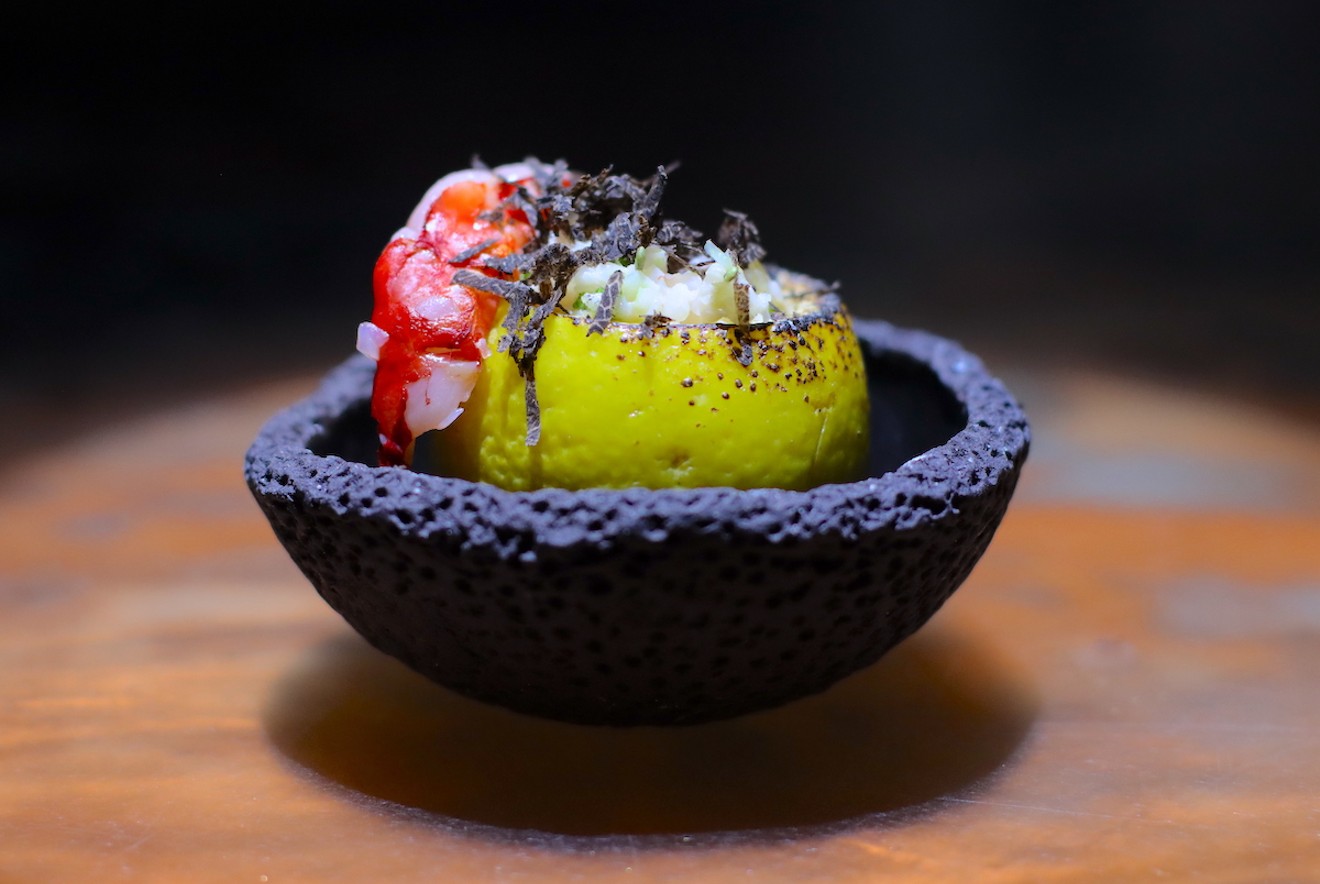 Nossa Omakase offers guests dinner and a show with 16 to 18 courses each seating. Photo by Nicole Danna
In case you didn't notice, omakase has put its stamp on the Magic City. These days, if you're a Japanese or Asian-inspired restaurant, chances are you're offering some form of a chef-chosen menu.

But perhaps the most Miami of them all is Nossa Omakase, the 14-seat restaurant tucked into a windowless space accessed by a back alley a short walk west of Collins Avenue in South Beach.

Here, Nossa's founders — also owners of the fast-casual eatery it abuts — act as a gatekeeper of sorts, offering adventure-savvy diners a speakeasy-inspired way to try their hand at omakase with a twist.

Around 7:30 p.m., Nossa patrons begin to gather outside Koa Poke, the creators' fast-casual eatery, gaining access with a single white envelope. Inside they find directions and the day's password, which point them around the corner and down a dark, narrow alley to their final destination.

For roughly $345 per person, diners receive a short prelude in the restaurant's dimly lit cocktail lounge before sitting down to a 16- to 18-course dinner, and — most important — an evening's worth of entertainment that often lasts upward of several hours.

On a recent Saturday night, New Times was invited to partake in the uniquely Miami experience, one recently awarded a spot in the inaugural Florida Michelin Guide.

Inspired by traditional Japanese omakase, Nossa — which translates to "wow" in Portuguese — was designed to elicit the same response from its guests.

Dreamed up by friends and self-described gourmands Sebastian Labno, Astrid Ramirez, and Joseph Citrano, their goal was to evolve the highly traditional omakase experience into a fun, interactive evening.

"It's omakase for Miami," Labno, who was inspired by omakase in Japan, Los Angeles, and New York City, tells New Times. "Our goal was to 'wow' our guests with a memorable experience not only with the physical space but also with high quality and unique ingredients not commonly found in omakase in South Florida."

True to its mission, Nossa is certainly more than a chef's tasting meal parsed out in a rhythmic series of courses. Instead, this prix-fixe restaurant is all about fun.

"Whenever I tried omakase, I was always waiting between seatings. Even Michelin-starred restaurants felt like a revolving door — rushed," Labno explains. "I wanted a place where people can come in, relax, talk, dine, and feel like the meal was made just for them."

His biggest peeve, however: omakase was boring.

"After three or four courses, I noticed people would just sit and stare at their phones," adds Labno. "And I can see why. To me, they were all the same. The same fish. The same ambiance. The same experience. I wanted to do more. I wanted to interact, educate, and put on a show."

In other words, forget the minimalist dining room, the monotonous assault of nigiri, the lulling music, and the hushed conversation.

At Nossa, an evening begins low-key enough in a lounge, a dark and cavernous space that gives diners a chance to imbibe amid quiet conversation. Hosts offer a menu that catalogs various wines, house-crafted cocktails, and spirits to peruse before the evening's main event.

For newbies, anticipation builds over the welcome drink, waiting for the moment when the host announces "the chef is ready."  We assemble quickly, drinks in hand, to be led down a winding hall and stopped at double frosted doors. After a ceremonious welcome speech, the doors open with a quiet whoosh,' revealing the space beyond.

A theater-like dining area with a 14-seat, half-moon bar overlooks the chefs' stage beyond. Spotlights, positioned above each seat, act as a beacon for the dish to come. They serve but one purpose: to provide a perfect canvas to take glamor shots of each dish despite the dining area's dim-lit space.

"These days, people live on social media and the cameras always eat first," explains Labno. "We wanted to give people the chance to share their experience with everyone."

It's also a way to itemize the myriad dishes to come. Most people expect to leave an omakase hungry, but not so at Nossa.

The evening we dined, more than 18 dishes appeared before us, wrapping up some time around 11 p.m. The pace, explains Labno, depends on the crowd.

"If people are enjoying themselves, we keep going," he says. "That's the beauty of one seating. We don't rush, and it offers people a chance to have a real evening out, plenty of entertainment, and great food. It's all about the show." 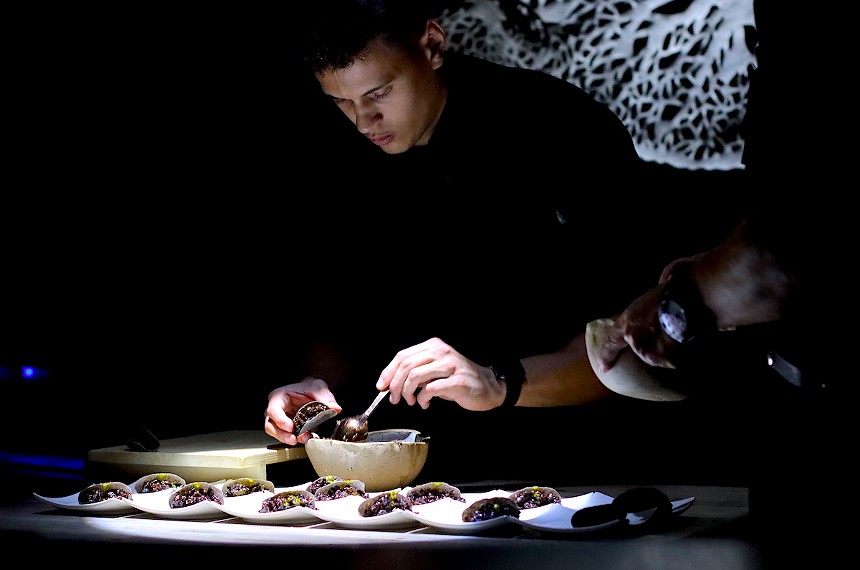 Nossa Omakase sous chef Gino Isola
Photo by Nicole Danna
That evening, Labno and sous chef Gino Isola worked together with quiet precision, wielding a variety of tools. They darted between fire, smoke, and bubbling liquid, producing tiny statuesque dishes in the process: oysters with ponzu, tuna tartare with amarillo cream, chutoro with black truffle, and a single orange slice of California uni that was torched before our eyes.

Although the menu is always changing, incorporating seasonal and unique ingredients with a strong emphasis on quality, taste, and presentation, a few signature dishes have emerged as regularly returning favorites, such as the jidori egg sandwich, a sous-vide egg that runs gooey and golden between two slivers of toasted shokupan and is topped with beluga caviar and fresh-shaved truffle.

A bluefin tuna tartare is prepared differently each time, but this evening it was set beneath an open quail egg stuffed with glistening beads of beluga caviar, slivers of fresh-shaved black truffle, and an amarillo cream sauce.

Likewise, a trio of tuna is an exercise in the art of aging, a weekly routine that begins with fish flown from Japan, a portion of which is aged ten to 15 days. The process serves to break down the protein fibers, offering guests a chance to taste the flavor and texture of aged nigiri.

By the end of the meal, you've become quite close to those seated next to you. It's almost impossible to not converse about the shared experience, the food, the fun. Even when the chef gently chides you for reaching to devour a dish too early — the final parsing of ingredients not yet done — you don't feel reproached. The person seated alongside you shared the same enthusiasm. And by the end of the meal, you feel like kindred spirits made familiar through a bevy of beautiful fare.

“I love what we do. We've built friendships, celebrated important moments with our customers, and introduced people to a new way to dine," sums up Labno. "We didn't want this to be just another omakase. We wanted it to be a Miami omakase."

Nossa Omakase. 1600 Collins Ave., Miami Beach; 305-539-9711; nossaomakase.com.
KEEP MIAMI NEW TIMES FREE... Since we started Miami New Times, it has been defined as the free, independent voice of Miami, and we'd like to keep it that way. With local media under siege, it's more important than ever for us to rally support behind funding our local journalism. You can help by participating in our "I Support" program, allowing us to keep offering readers access to our incisive coverage of local news, food and culture with no paywalls.
Make a one-time donation today for as little as $1.