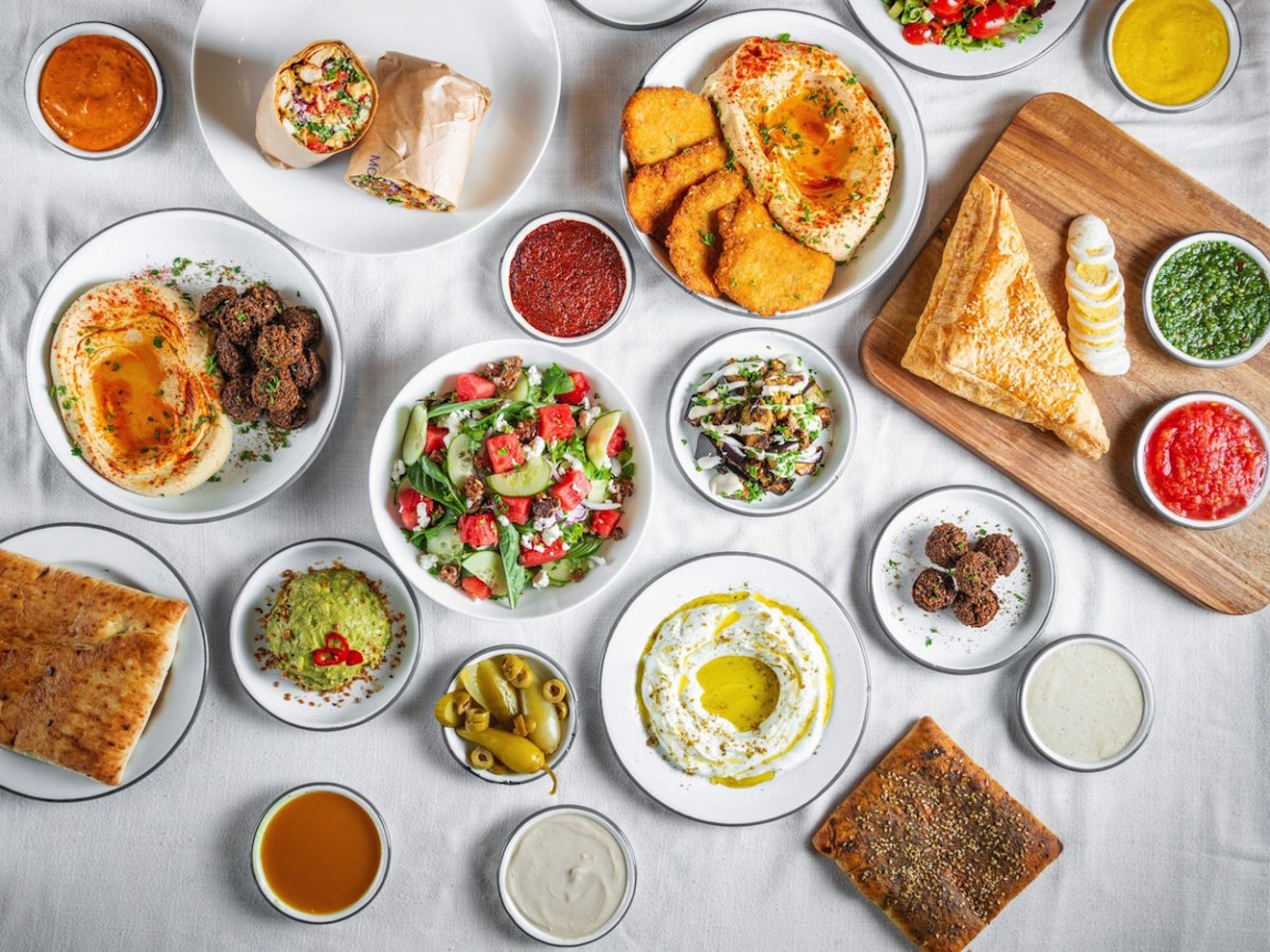 A spread of dishes you'll find on Motek's menu, including falafel, schnitzel, and salads. Photo by Tessa Levy
It's lunchtime on the ground floor of the historic Seybold Building in downtown Miami. But the socially distant throngs strolling past the open doorway of Motek Café would be forgiven for thinking for a moment that they've stumbled into an indoor mall in Tel Aviv's central station, what with the restaurant's honey-colored tiles, vibrant lighting, and Middle Eastern music emanating from within, punctuating the buzz of the businesses that surround it.

Situated between two jewelry stores, Motek — the name means sweetheart in Hebrew — is a fast-casual take on Mediterranean-Israeli dishes, with a menu that includes falafel, shawarma, and hummus. Founded by Tessa Levy and with chef Einat Admony (well known for her New York restaurants Balaboosta and Taim) behind the menu, Motek opened this past June during the pandemic. Focusing on fresh, quality ingredients, Motek has attracted a local following in an unprecedented time for the food-service industry. Admony has since left, but the menu remains the same.

Levy grew up around food. She comes from a French-Moroccan Jewish background and learned how to cook at home in the kitchen with her mother and grandma. She studied entrepreneurship in college and spent time working at erstwhile juice bar Jugofresh, in the front of the house and as a brand ambassador. After a failed effort to start her own food company, she met her husband, and the seeds for Motek were planted.

"The word motek — it's a way you greet anyone. Your mom, your friend," Levy says. "When you come in the restaurant, we wanted to reflect that same thing. You're not going to a fast-casual place that's oily and greasy. You're going somewhere where you can see the kitchen."

For Levy, two of the most important standards are fresh ingredients and consistency.

"We want to make sure that if people are ordering from us a third or fourth time, that it is going to be as good as the first time," Levy explains. "I always felt the Mediterranean-Israeli places were missing something in Miami. I worked in downtown and was always ordering delivery. It became tiresome to try to find fresh, good ingredients coming to our door. That was our goal with Motek."

Motek's menu is a mix of well-known Mediterranean staples and family recipes, with main dishes priced between $10 and $20. Generous Israeli salads with lemon and olive oil are prepared every hour, and the restaurant makes a fresh batch of its signature hummus every two hours. 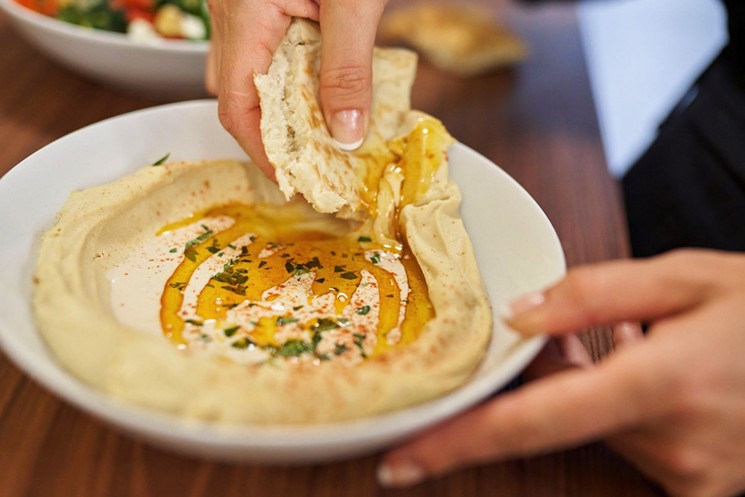 Motek's signature hummus, made fresh every two hours.
Photo by Ruben Cabrera
Lamb and chicken shawarma are served straight off the grill, on pita imported from Angel's Bakery in Jerusalem. Levy also sources locally, purchasing challah and other baked goods from Bettant Bakery, greens from Box Greens, tea from JoJo Tea, and honey from the Native Guy.

Motek's "Arayes Burger," a Lebanese dish of meat-stuffed pita, has been one of the restaurant's most popular plates, according to Levy. Motek also offers a schnitzel sandwich on fresh challah, as well as falafel.

Besides the aforementioned falafel and a vegetarian version of the "Arayes Burger," vegetarian options at Motek include mujaddara (rice and lentil) bowls and hummus bowls. For those who wish to end their meal with something sweet, desserts include baklava and malawach churros. All ingredients and meat are glatt kosher, though Motek is not kosher certified.

Levy hopes Motek Café will attract all manner of clientele. So far, she says, the crowd has been a mix of Americans, Cubans, Venezuelans, and people who live and work in downtown. In the past few weeks, she has begun to see more Israelis, with customers arriving from Aventura, Hollywood, and Boca Raton.

"It's really important, the feeling when you leave the restaurant, that you don't feel greasy and heavy," she says. "That's where my background working in healthy places helped. I've always been conscientious about ingredients and freshness. These things matter to me on a personal level, which reflects in Motek. We try [to buy] local when we can. Even if you're eating a schnitzel sandwich, you still leave knowing the quality of the arugula, the chicken, challah — everything — is so fresh."

Motek Café. 36 NE First St., Suite 132, Miami; 786-953-7689; motekcafe.com. Monday through Saturday 10 a.m. to 10 p.m.
KEEP MIAMI NEW TIMES FREE... Since we started Miami New Times, it has been defined as the free, independent voice of Miami, and we'd like to keep it that way. With local media under siege, it's more important than ever for us to rally support behind funding our local journalism. You can help by participating in our "I Support" program, allowing us to keep offering readers access to our incisive coverage of local news, food and culture with no paywalls.
Make a one-time donation today for as little as $1.
Bernard Hacker