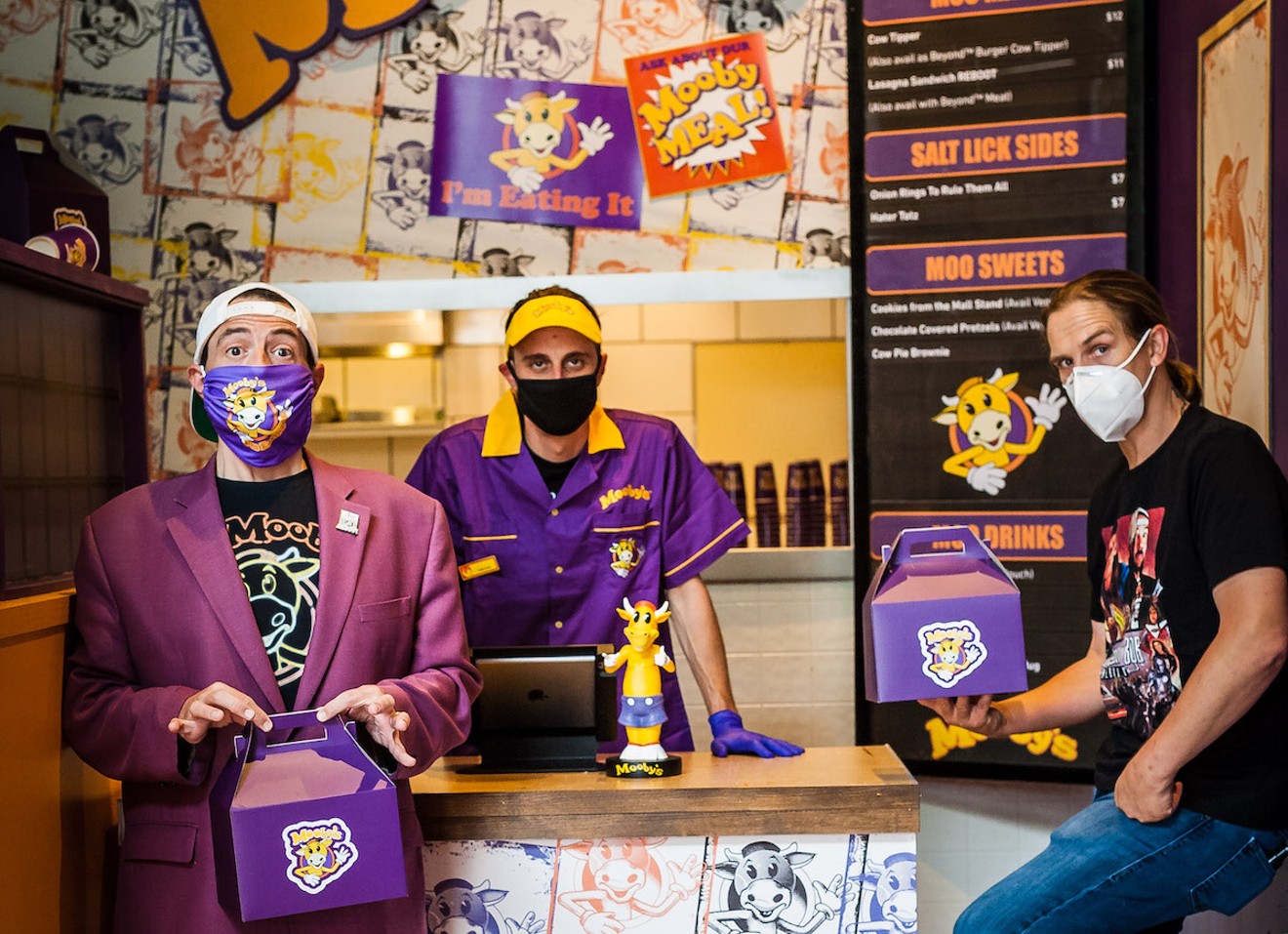 Mooby's, the fictional restaurant created by filmmaker and actor Kevin Smith, is coming to Delray Beach in September. Photo courtesy of Mooby's Dine-In Experience
There's a new burger pop-up headed for South Florida, and it's a cult film buff's fantasy come to life.

Fans of actor and filmmaker Kevin Smith — and his fictional fast-food restaurant, Mooby's — will be excited to learn they can experience the eatery for themselves when a touring pop-up makes its way to Delray Beach.

The restaurant, which turns up in several of the director’s films, has already popped up in a handful of U.S. cities; Delray Beach is slated to be the 20th stop on the tour. Plans are to continue the tour for the next several months.

Mooby's developed a cult following in the plot of multiple Kevin Smith films. The restaurant was first featured in Dogma, and figured prominently the Clerks and Jay and Silent Bob series. The eatery is best known for its triple burger, dubbed the “Cow Patty,” and the beloved “Hater Totz."

According to event organizers, Smith's longtime dream has been to open a Mooby's in real life — and in the spring of 2020 the filmmaker did just that. The concept began as a non-profit promotional program with a delivery-only model conceived to generate carry-out business for Los Angeles restaurants struggling during the pandemic.

From there, Mooby's morphed into a ten-day pop-up that sold out within minutes. With the demand to extend it, Smith reopened as a full Mooby's experience, which ran for three months. When the pop-up came to an end, fans encouraged the Mooby's team to take it on the road to other cities.

Today, the touring pop-up concept continues to be a fun fan food experience that helps struggling businesses impacted by the pandemic. It's described as a "totally immersive experience" that will take diners directly into some of Smith’s most memorable movie scenes. Each host restaurant is re-created into a temporary Mooby’s and will sell movie-themed and Smith-inspired merchandise in addition to the food.

Starting in September, Mooby's will be taking over Tin Roof. The pop-up will be open daily from 11 a.m. to 8 p.m., and runs from Tuesday, September 7 through Tuesday, September 21, 2021. The temporary restaurant is reservation-only. Tickets go on sale at 10 a.m. on Monday, August 30, 2021, and fans are encouraged to sign up for the email list to gain early access.

Guests will be seated in 45-minute time slots throughout the pop-up's operating hours to ensure social distancing. Up to four tickets can be combined to create a single party of four. Tickets are priced at $29 per person and will be made available to purchase at moobyspopup.com.

Behold the Cow Topper.
Photo courtesy of Mooby's Dine-In Experience
The Mooby's team tasked chef Royce Burke — a Los Angeles chef best known for his Secret Lasagna concept — to create the fast food-inspired menu items. Because Smith is vegan, he also made sure to include several meat-free options like a plant-based “Cow Tipper" and the all-new "Cow Dong" brat.

Ticketholders will gain access to the “Mooby’s Dine-In Experience,” which includes a choice of one "Moo Main" with offerings such as a "Cow Topper" burger or "Cock Smoker" chicken sandwich alongside a "Salt Lick Side" ("Hater Totz" or "Onion Rings to Rule Them All".) Add-ons include cookies from the Mall Stand, chocolate-covered pretzels, CBD gummies, "Sno Job" Icees, and Mooby’s branded soda.

As with previous city stops, the pop-up also features its very own local brew. For the Delray Beach Mooby's, the special beer collaboration was organized with Pompano Beach Brewing Company, who created a cream ale that will be available for sale at the Mooby’s pop-up, served from Moob'ys branded collectors' cans.

Mooby's pop-up at Tin Roof. 8 E Atlantic Ave, Delray Beach. Tuesday, September 7 to Tuesday, September 21 from 11 a.m. to 8 p.m. daily. Ticketed event only. Tickets cost $29. Register at linktr.ee/moobys for ticket information.
KEEP MIAMI NEW TIMES FREE... Since we started Miami New Times, it has been defined as the free, independent voice of Miami, and we'd like to keep it that way. With local media under siege, it's more important than ever for us to rally support behind funding our local journalism. You can help by participating in our "I Support" program, allowing us to keep offering readers access to our incisive coverage of local news, food and culture with no paywalls.
Make a one-time donation today for as little as $1.