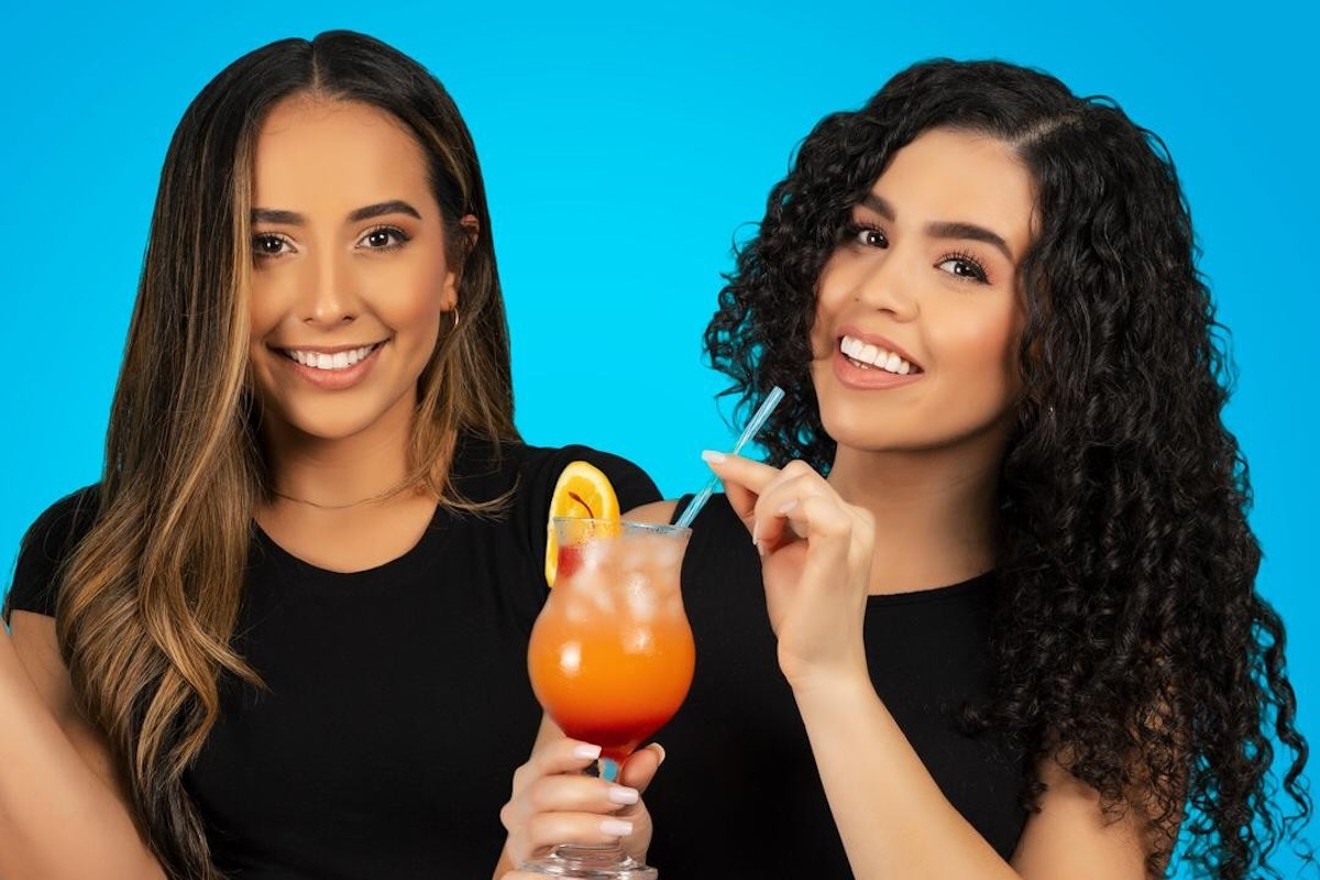 Vianca Arias and Samantha Warren are the Thirsty Bartenders. Photo by Bobby Millette
Vianca Arias, 27, and Samantha Warren, 32, have been working together in the food-and-beverage industry since 2012 after meeting at Tijuana Taxi Co. in Coral Springs. The two friends immediately hit it off with what they describe as "natural chemistry when we're both behind the bar," when Warren trained Arias in cocktail making at the Mexican restaurant.

Together, the friends got bartending positions in Miami, working at Hyde Lounge at the SLS South Beach Hotel, as well as its location at American Airlines Arena on game days.

In late 2018, they decided they wanted to get in front of the camera and show off their friendship and cocktail-creating partnership, and the Thirsty Bartenders were born.

As the Thirsty Bartenders, Arias and Warren teach viewers how to make their favorite drinks at home, via Instagram, YouTube, Facebook, and TikTok. Their videos include step-by-step instructions on how to make favorites like a mojito or old-fashioned, along with each drink's history, tasting notes, cocktail variations, and liquor substitutions.

"I feel like a lot of bartending pages are super serious, and we definitely want to be fun bartenders," Arias tells New Times. "That's what you get when you come and see us at our bars in person, but we just wanted to be that as well on camera. We are fun, and we make really delicious drinks, too."
When creating the brand, Arias and Warren, who look to turn this venture into an entrepreneurial opportunity, wanted something unique and entertaining.

"We wanted words that were clear to what we were," Arias explains. "Thirsty is a word that's related to drinking, so we knew we were on to something.  We went through so many names, and Thirsty Bartenders was available across all platforms, and it's fun, and it's a little risqué."

At the beginning of the pandemic, the Thirsty Bartenders brand had about 13,000 followers on Instagram. Finding themselves laid off after bars were closed, they used the time to produce more content. In April, they created a cocktail that caught the attention of actor and tequila aficionado Dwayne "The Rock" Johnson. A shoutout and a follow later, their Instagram following has grown to more than 35,000.

"When we got noticed by the Rock, it was a really big moment for us," says Warren, who is thankful that quarantine brought something positive within the chaos. "We did a video on his Teremana tequila, and he saw it and followed us, and ever since then, we've been getting a lot of followers. We found the good in [the quarantine], the positive in it, and it's to grow our business and create content."

Once the pandemic gets under control and the possibility of bars reopening becomes plausible, Arias and Warren say they have a steady weekly schedule that will allow them to balance their content creation and work schedules at Hyde.

"Lately, we've been working every single day. We will have one day off per week," Warren admits. "The good thing about bartending is that it's usually on the weekends, so it leaves us with the weekdays for us to do what we've been doing."
KEEP MIAMI NEW TIMES FREE... Since we started Miami New Times, it has been defined as the free, independent voice of Miami, and we'd like to keep it that way. With local media under siege, it's more important than ever for us to rally support behind funding our local journalism. You can help by participating in our "I Support" program, allowing us to keep offering readers access to our incisive coverage of local news, food and culture with no paywalls.
Make a one-time donation today for as little as $1.