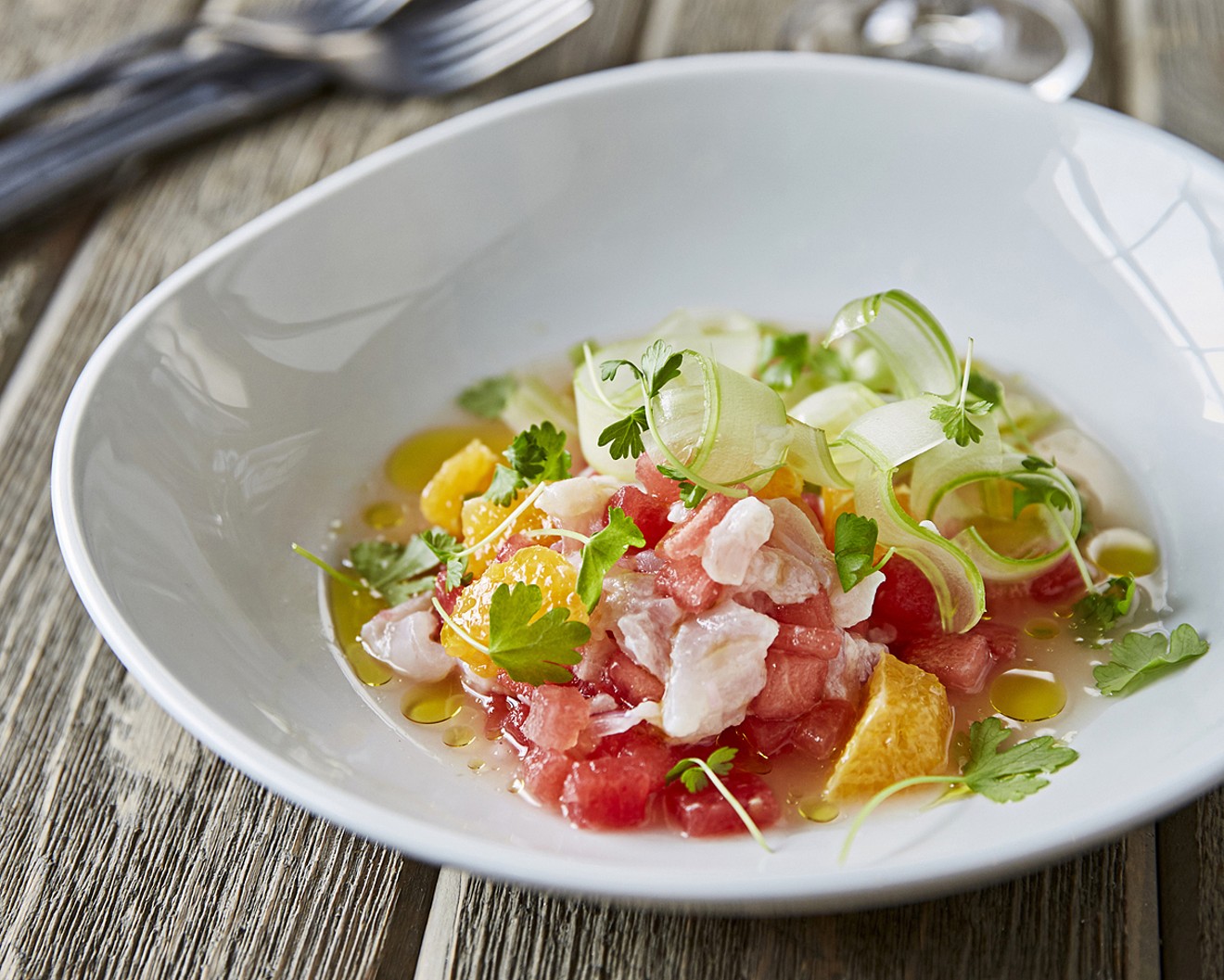 This past year, a handful of local toques were behind the most anticipated openings. Top Chef alums Jeff McInnis, Janine Booth, and Jeremy Ford debuted restaurants in Miami Beach, while Niven Patel and Zak Stern made tradition the new trend.

There were also notable additions from outsiders. James Beard Award winner Michael Solomonov, based in Philadelphia, raised the bar for fast-casual joints in Wynwood. And New York's Justin Smillie brought his California-inspired spot to South Beach.

"Opening a restaurant is intimidating," says McInnis, who launched two eateries this year: Stiltsville Fish Bar in Sunset Harbour and Root & Bone in South Beach. "You put everything on the line and expose yourself. But it's worth it. Miami's scene has clearly grown, and now it covers nearly every cuisine you could imagine."

Read on for New Times' best restaurant openings of 2017.

"Miami's scene covers nearly every cuisine you could imagine."

Dizengoff and Federal Donuts. This past summer, James Beard Award-winning chef Michael Solomonov brought two successful concepts to a single block in Wynwood. Dizengoff offers a simple menu of hummus served with a topping — such as cabbage, beets, or a hardboiled egg — and Israeli pickles with house-made pita ($10 and up). Next door, Federal Donuts churns out Korean-style fried chicken and fresh doughnuts ($1.75 to $25). Both spaces are bright and cheerful, elevating the fast-casual form into something memorable. 250 NW 24th St., Miami; dizengoffhummus.com; federaldonuts.com.

Ghee. Less than six months after opening Ghee in Dadeland, Niven and Shivani Patel debuted a second, nearly identical location in the Design District this past fall. Both menus change daily depending upon availability at the Patels' farm in Homestead. Mostly, there are dishes inspired by the couple's roots in Gujarat, India's westernmost state. There are familiar items, such as chicken tikka masala and samosas stuffed with duck confit ($14 to $15), as well as reinterpretations of Indian street food such as avocado bhel ($13), which coats puffed rice in Homestead avocados, and pani puri, where crisp puffs are filled with beets and green juice ($9). You'll also find many curries, vegetables, and grilled items. Prices are slightly more expensive at the Design District location. 8965 SW 72nd Pl., Miami, and 3620 NE Second Ave., Miami; gheemiami.com.

Upland. Upland breaks many unspoken South Beach traditions. The Manhattan import, created by restaurateur Stephen Starr and chef Justin Smillie, basks in a warm glow on a quiet corner of Miami Beach's South of Fifth neighborhood. Inviting comfort food is a nod to rustic Italian cuisine, and many of the dishes are cooked in an oversize wood-burning oven or an adjoining coal one, which adds a hint of smoke without a charred taste. The pistachio pizza includes a savory blend of mozzarella and fontina topped with a crunchy layer of baked pistachios ($19). Otherwise, come for the little gem salad, tossed with avocado and ricotta salata ($18); the bucatini cacio e pepe ($19); and the wild branzino, brined for three hours and slathered in a mixture of green chilies, sugar, and smoked salt ($72). The place is pricier than others in the area but worth the cost. 49 Collins Ave., Miami Beach; 305-573-5550; uplandmiami.com. 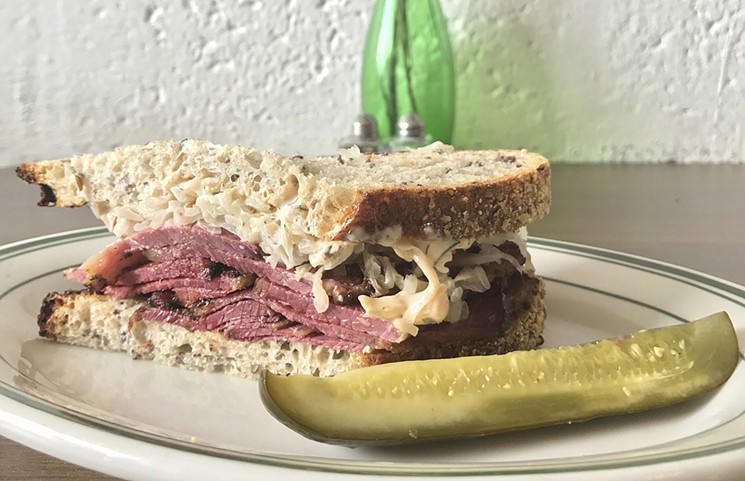 Zak the Baker Deli. Outside a nondescript converted warehouse on NW 26th Street in Wynwood, a sign bearing the word "Bakery" was changed to "Deli" in early 2017. Inside is Zak Stern's traditional Jewish delicatessen, where he serves smoked salmon salad and slices of corned beef and pastrami. With limited operating hours and less than two dozen chairs, the deli attracts hundreds of customers every week. The menu ($4 to $17) — which includes salty fish sandwiches with pickle plates of crisp brined cabbage, cucumber, and wedges of green tomato — pays tribute to traditional Eastern European cuisine. The food requires an adjustment for customers unfamiliar with Jewish fare, but it's worth it. And Stern's large bakery, stocked with hundreds of sourdough loaves and beautiful pastries, is only a block away. 405 NW 26th St., Miami; 786-347-7100; zakthebaker.com.

Arson. About four years ago, Barcelona native Deme Lomas visited Miami on vacation and decided to stay. After opening Niu Kitchen in mid-2014, Lomas turned his focus to Arson this past February. He experiments with everything from sweetbreads, crisped the way Argentines like them, to baby-back ribs American-style, for which he even concocts his own barbecue sauce. At Arson, Lomas has proven his ability to prepare more than just Spanish cuisine. But his best work can be traced to his Barcelona upbringing. Try the octopus served with a tomato gelatin and spicy aioli ($17) or the secreto ibérico, flavored with a green cilantro mojo ($21). Though Lomas has grown, he remains close to his roots. 104 NE Second Ave., Miami; 786-717-6711; arsonmiami.com.

Sherwood's Bistro & Bar. Barclay Graebner, best known for Morgans Restaurant in Wynwood, is responsible for a charming place on the edge of El Portal that opened in June. Filled with antiques and covered with large windows, Sherwood's is inviting. The menu is comfort food, and prices are high for the area but not out of line for a restaurant of this quality. Starters include a chorizo and tomato salad with feta ($10); a bistro salad with frisée, egg, and pancetta ($8); and a daily crudo served with jalapeño vinaigrette ($16). Among entrées, the steak frites offers well-cooked and seasoned meat ($18); the Little River ramen comes warm with savory caramelized pork ($18); and the Uptown burger is stuffed with goat cheese and topped with guacamole and greens ($18). Sherwood's is a happy addition to a neighborhood starved for good restaurants. 8281 NE Second Ave., Miami; 786-359-4030; sherwoodsbistro.com.

Sanguich de Miami. Ironically, finding a quality Cuban sandwich on Calle Ocho isn't easy. But today, a stylishly converted shipping container is SW Eighth Street's leading Cuban sandwich shop. All ingredients, from ham and pork to mustard and pickles, are prepped and cooked in-house. Bread is the only item not made onsite. Sanguich's owners — Daniel Figueredo and fiancée Rosa Romero — cretated their own recipe, which is prepared in a Homestead bakery. The menu, mainly composed of "sanguiches" (sandwiches) and "bátidos" (milkshakes), includes medianoches, pan con bistec, croquetas preparadas, and cream-cheese-filled Elena Ruzes, which are paired with a rotating selection of shakes, including dulce de leche, and guava and cream cheese. There are also plantain fries, served with up to five variations of mojo sauce. Items are affordably priced between $6 and $10. 1641 SW Eighth St., Miami; 786-313-3650; sanguich.com.