How it started. / How it's going. Via Instagram/Courtesy of Ch'i
This past September, two high-profile restaurant groups announced their plan to collaborate on a new dining and entertainment concept in Brickell City Centre.

Almost immediately, the name drew criticism as being culturally insensitive — perhaps most notably from Miami Herald food editor Carlos Frías. He expressed his disapproval on social media, tweeting, "Imagine if a couple of rich, light-skinned Hispanic guys from Miami opened a restaurant called Los Negros. I just got an email pitch about something just as offensive. Be better, Miami."

I just got an email pitch about something just as offensive.

Meanwhile, the partners went about working up a menu and design for the new venture and began populating their social-media pages with visual teases of the forthcoming restaurant that contained stereotypical props accompanied by corny puns.

For example, a dramatically lit photo of a blond woman wearing an Asian conical hat boasted, "our Multi-Faceted Concept will "ex-panda" your mind." An image of a white man kneeling with a parasol against a misty background said, "Legend tells of a legendary warrior whose Kung Fu skills were stuff of legend." A picture of an Asian woman posed next to a large smiling Buddha statue, wearing a silk robe with a bun in her hair held in place with chopsticks revealed, "Buddha is our 'om' boy." 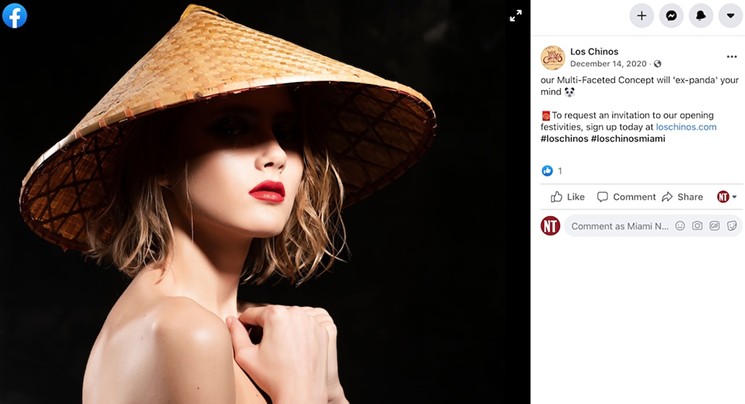 A woman is depicted in an Asian conical hat in a Facebook post from Los Chinos.
Screengrab from Los Chinos Facebook
But after a sign for the new venture was erected at Brickell City Centre, Grove Bay Hospitality Group chief executive officer Francesco Balli tells New Times, he heard from people who didn't appreciate the name.

As the opening — targeted for late spring — drew nearer, Bali and his partners decided that a name change — to a moniker that better suited the high-energy restaurant they're striving to build — was in order.

"We wanted to be sensitive," says Balli, who adds that "Los Chinos" was intended as a fond nod to his childhood, when his family would sit down to lunch after church at Canton Chinese restaurant in Dadeland. "My family's Peruvian, and that term just equated to going to a place that was about fun and family," Balli says.

The new name, Ch'i, is a Chinese word for energy. This morning, the partners issued the following statement:

“Collectively, Breakwater Hospitality Group and Grove Bay Hospitality Group, have created more than 10 award-winning food and beverage concepts in South Florida. Each concept is born from a place of love and built with the intention to create a fun, safe and inclusive experience for everyone; our first joint venture together will be no different. While the original moniker of our forthcoming concept, Los Chinos, was inspired by only the fondest childhood memories, today we have made the collective decision to change the name to CH’I which means “energy” and better suits and describes the concept and experience we plan to deliver to our guests.

We have worked hard to bring Miami something very special, and we can’t wait to introduce CH’I, set to open in Brickell City Centre this spring. CH’I will be a high-energy, multi-faceted Chino-Latino concept, combining a cocktail lounge, upscale dining, outdoor garden and market area and will be an inclusive experience for everyone to enjoy.”

Emi Guerra, cofounder of Breakwater Hospitality Group and a partner in Ch'i, calls the new name "a better descriptor of the restaurant, which will have a strong social aspect and a higher-energy programming to it.

"All of our venues have a certain purpose and this one has a lot to do with the energy of Brickell and being at the center of the action," Guerra adds. "We're looking forward to showcasing all the work we put into this concept."

Balli describes the menu as based on Chino-Latino cuisine, a fusion that dates back to Chinese immigrants who came to Latin America in the 19th century. "We will be diving into how Chinese cuisine and culture impacted Latin American culture," he says. The team tapped Peruvian chef Rafael Perez to helm a kitchen that will serve items like Peking duck tacos, ceviche mixto, lo mein, ropa vieja spring rolls, and whole lobster.

A fast-casual component will offer grab-and-go items, and a market will house arcade games and sell food and T-shirts.

The restaurant, which takes over the old American Harvest space at Brickell City Centre, includes a large outdoor area with its own bar and cabanas.

Though Balli says the posts were intended to jumpstart the spirit of fun and excitement surrounding a restaurant opening, the newly rebranded Ch'i will start with a clean slate, including the erasure of the stereotyped images from last year.

"We are shifting away from that and changing gears," Emi Guerra says, adding, "Nothing that was said or done or posted was every meant to be offensive. We saw them as beautiful pictures. We wanted to show a sense of fabulousness. Each of the photos were high-quality. At the time, we weren't really able to take food pictures because of COVID, so we tried to paint a picture that the restaurant was going to be fun. The angle we put out — there were no bad intentions."

Moving forward, Guerra sums up, "We are focusing on positive ch'i."

Chi at Brickell City Centre. 701 S. Miami Ave., Miami; Chibrickell.com. Opening later this spring.
KEEP MIAMI NEW TIMES FREE... Since we started Miami New Times, it has been defined as the free, independent voice of Miami, and we'd like to keep it that way. With local media under siege, it's more important than ever for us to rally support behind funding our local journalism. You can help by participating in our "I Support" program, allowing us to keep offering readers access to our incisive coverage of local news, food and culture with no paywalls.
Make a one-time donation today for as little as $1.