If you're looking for a dish that's sweet, savory, rich, and piquant, look no further than the hallaca.

Hallacas are the Venezuelan equivalent of tamales. A smoked banana leaf is filled with a mixture of ingredients to form a filling meal. Cornmeal dough is stuffed with meat, chicken, or pork, but hallacas add European-inspired flavors of capers, olives, and raisins. Also, the ratio of dough to meat differs: Hallacas go all out with filling, whereas tamales have more dough.

Mystery surrounds the origin of the hallaca, but a common belief is that it was a dish prepared by slaves of the Spaniards using leftover scraps of beef, pork, and chicken, which they packed into seasoned cornmeal pockets wrapped in banana leaves. Another tale tells of a priest, angered upon seeing the Conquistadors’ starving slaves, who commanded the Spaniards eat like the natives. They did, on principle, but upped the meal a notch with the incorporation of a hearty stew.

The dish is elaborate and time-consuming and usually requires an assembly line of friends and family to prepare. Many people make large batches to enjoy and give away through Epiphany, or Three Kings' Day, which is observed January 6. Hallacas are served with ensalada de gallina (chicken salad) and pan de jamón, a must-have bread packed with ham, olives, and raisins.

As with any tradition, every family has its own heavily guarded secret recipe, from making the stew, which is called the guiso and uses at least three types of meats, to properly preparing the masa, yellow cornmeal flavored with a rich stock and annatto-infused oil. Each hallaca is assembled by flattening a portion of prepared masa on a smoked banana leaf, adding a generous spoonful of guiso, and then sprinkling the stew with raisins, capers, olives, onion, and pepper and a strip of chicken breast. The packet is then expertly folded into a tight rectangle and tied into a neat package.

Miami’s expansive expat community has spawned several restaurants that offer this meal, so you don’t have to belong to a Venezuelan family to enjoy this culinary party, or bonche.

Here are five popular spots where you can try hallacas: 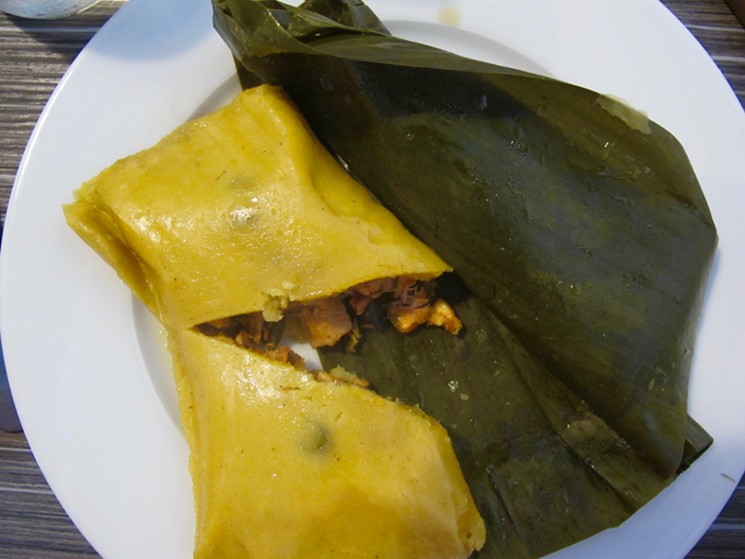 Budare Bistro
Named for a circular griddle used to make arepas — the Venezuelan staple cornmeal patty which is stuffed with cheese, meats, and/or beans — Budare Bistro has a bright interior whose walls are plastered with photographs of happy patrons and images of Caracas’ beautiful El Ávila National Park. Hallacas cost $9 each and are available for delivery or takeout at the Doral (1830 SW Third Ave.) and Weston (1916 Weston Rd.) locations.

Doggi’s
Doggi’s began as a hot-dog cart in 2010 and has become a successful pit stop for Venezuelan fare. Hallacas run $10 each.

Don Pan International Bakery
This local chain is a fixture in South Florida, whose first store opened on Flagler Street in 1995. The bakery has expanded to include locations in Kendall (13758 N. Kendall Dr.), Coral Gables (400 S Dixie Hwy.), and beyond. Get your hallacas here for $7.25.