The byword here is " Diners stop by all day long to savor bistro food by Puerto Rican spouses Ivan Nieves and David Flores. Considering the size of the restaurant's original location in the oceanfront community of Condado near San Juan, one could say the concept grew to meet the neighborhood's demands.

"We started selling pastries, but customers in the vicinity who didn't like to cook started asking for food menus," Nieves says. "The neighborhood wanted us, and the sense of community made us believe our business was going to work out."

After a couple of years, La Social in Puerto Rico grew to house a boutique and beauty salon and became a popular one-stop-shop for dining and entertainment. When the couple shuttered the restaurant in September 2017 for Hurricane Irma, it was assumed the closure would be temporary. However, a couple of weeks later, Hurricane Maria slammed the island, leaving Nieves and Flores homeless and without power or water to run their operation.

Following the devastation, the couple headed to Miami with Nieves' grandfather, a cancer patient who was in need of treatment. "His physician left the island after the hurricane, and we couldn't get the attention he needed there," Nieves says. "It became obvious that the island wasn't going to recover fast, so we decided Miami would be a good place to start over. David and I saw it as an adventure — we were young and had good savings; our business was doing great in Puerto Rico before the hurricane."

By December, La Social had electricity again, and Condado residents without power would congregate at the space. "I went back to the island set on closing the club, but it was Christmastime and a neighbor convinced me not to. She said, 'You are the hanging lights of Condado. Please, don't turn them off,'" Nieves recalls. "They helped us clean up, and we resumed operations with what able to salvage, in the best way we could."

Back in Miami, the couple looked at more than 50 potential locations over a three-month period before deciding on a 1,200-square-foot space on Biscayne Boulevard at NE 76th Street. The catalyst that sent them to the area was the realization there was no place to order coffee with almond milk. Shortly thereafter, La Social debuted in May 2018.

At the Miami outpost, Nieves, who worked for more than a decade in food and beverage and hospitality, runs the kitchen, where he turns out an affordable menu of items based on natural ingredients. "We offer something that's between fast-casual and a restaurant, where locals can have a chat with friends over a good meal and move from there." 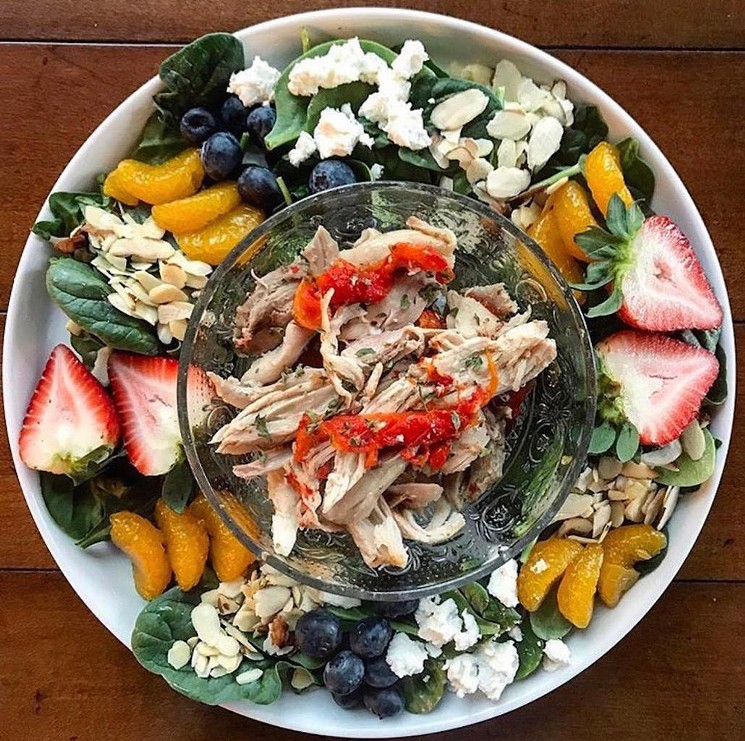 Almond berry with chicken, spinach, Mandarin oranges, and goat cheese.
La Social
La Social keeps its breakfast menu simple with maple oatmeal and fruit ($7) and coconut crème French toast ($12), along with an omelet bar offering the option of vegetarian, Greek, and Spanish with manchego cheese and prosciutto. Beverages include watermelon and cucumber lemonade ($5.50), a green smoothie ($7), and carrot orange juice ($6).

An on-trend offering of toasts includes peaches and goat cheese or salmon and avocado ($14), and pita pizzas can be customized with toppings such as spinach, bacon, and tomato ($6.50). The kitchen also makes a variety of homemade pastries to be enjoyed with freshly brewed beverages such as Jojo tea ($5.50), cortado ($3.75), and matcha latte ($5.50). Weekend brunch warriors will enjoy a rotating à la carte menu and music on the patio.

The couple visits Puerto Rico regularly, but Nieves' mother, Myrna Torres, now runs the original location. In fact, according to Nieves, he and Flores are setting down more roots in Miami: They hope to open a location in downtown Miami before year's end.

"We are blessed to have a chance to live our lives and run our business in a new way," he says. "We want to make a lot of things happen."

La Social. 7601 Biscayne Blvd., Miami; 786-542-5922; lasocial.business.site. Monday through Saturday 8 a.m. to 8 p.m.; Sunday 9 a.m. to 4 p.m.
KEEP MIAMI NEW TIMES FREE... Since we started Miami New Times, it has been defined as the free, independent voice of Miami, and we'd like to keep it that way. With local media under siege, it's more important than ever for us to rally support behind funding our local journalism. You can help by participating in our "I Support" program, allowing us to keep offering readers access to our incisive coverage of local news, food and culture with no paywalls.
Make a one-time donation today for as little as $1.
Juliana Accioly
Contact: Juliana Accioly