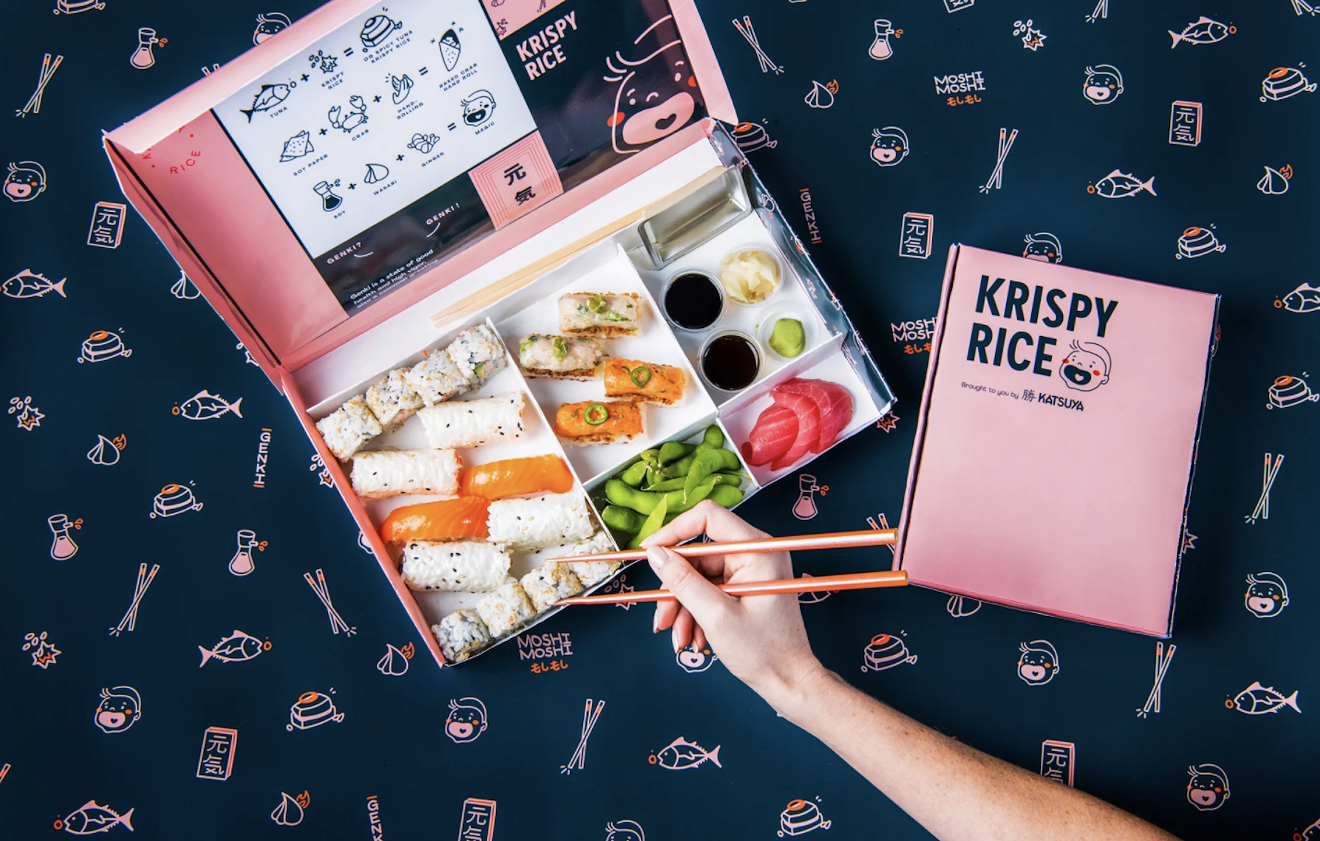 The Box by Krispy Rice includes over 15 items for $30. Photo courtesy of SBE Entertainment Group
Krispy Rice, a delivery-only restaurant concept that launched in Los Angeles earlier this year, has arrived in South Florida.

The online restaurant, which officially launched in Miami and Fort Lauderdale last month, specializes in crispy rice — grilled and charred blocks of sushi in varieties like king salmon yuzu, truffle avocado, and wasabi hamachi. It all springs from the fledgling chain's source of inspiration, sushi chef Katsuya Uechi, and the signature spicy-tuna crispy rice he serves at his namesake Katsuya restaurants.

The Krispy Rice concept is the work of C3 (Creating Culinary Communities), an incubator and subsidiary of SBE Entertainment Group. A ghost-kitchen model, the new chain focuses on offering its customers a restaurant dining-room-free experience.

Rather than hiring a Katsuya chef to juggle takeout orders in individual restaurant kitchens, the chain operates out of commissary-only kitchens. Orders are routed to the nearest kitchen, the better to ensure shorter delivery times and meals that arrive fresh to your door.

The concise list of dishes offers a Cali-style twist on traditional Japanese offerings.

A la carte items include soy paper hand rolls, nigiri, and the brand's namesake crispy rice served two pieces per order ($5 to $9.50). A number of combination bento boxes give diners a varied selection as a neatly packaged meal ($20 to $40). Orders are customizable, including specialty-cut maki rolls that allow diners to choose their preferred size with four- or eight-piece options. Additional sides include edamame, hamachi sashimi, fried rice, seared tuna, and fried shrimp ($4 to $18).

In South Florida, Krispy Rice is available for delivery in Miami-Dade and Broward County via UberEats, Grubhub, and Postmates.

Thanks to its delivery-only model, Krispy Rice orders are executed and delivered with freshness in mind. The SBE brand — which coined the term "phone to table" — plans to grow its latest brand with as many as 75 locations nationwide in the next two years. The rapid expansion is focused on securing a place in the delivery-only restaurant model expected to become a $200 billion industry by 2025.

By the end of 2020, C3 says it will operate more than 142 ghost kitchens spanning multiple existing and forthcoming brands. Moving forward, these kitchens will serve as hubs for additional restaurants including a fried chicken sandwich concept known as Sam’s Crispy Chicken and the brand's vegan restaurant, Plant Nation.

According to Dale Amler, senior director of digital marketing for SBE, Krispy Rice plans to expand its presence in Florida, as well as cities like Portland and Austin.

"We wanted to bring Krispy Rice to Miami — especially South Beach — since the city has such a diverse culture and food scene enriched by locals and tourists alike," Amler tells New Times. "Sushi and Miami go hand in hand, making it the perfect addition from a brand and culinary perspective."
KEEP MIAMI NEW TIMES FREE... Since we started Miami New Times, it has been defined as the free, independent voice of Miami, and we'd like to keep it that way. With local media under siege, it's more important than ever for us to rally support behind funding our local journalism. You can help by participating in our "I Support" program, allowing us to keep offering readers access to our incisive coverage of local news, food and culture with no paywalls.
Make a one-time donation today for as little as $1.