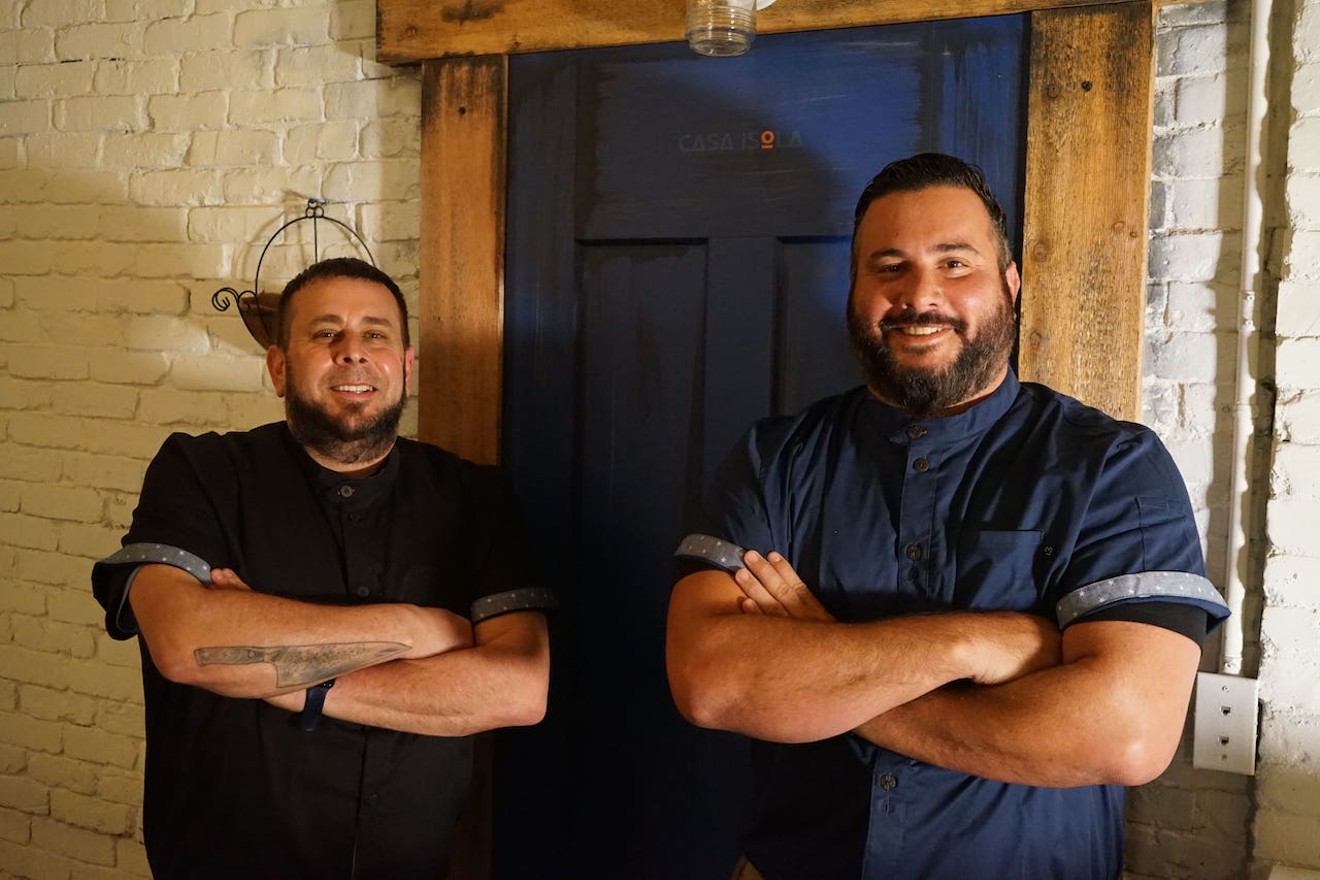 The Italian concept occupies the former Pubbelly Noodle Bar space in Miami Beach’s Sunset Harbour neighborhood, which ceased operations in the fall of 2019.

An indoor/outdoor space decked in a Mediterranean-inspired décor of white and blues, Mendín's first Italian restaurant is a collaboration with his longtime business partner Sergio Navarro and former Lucali chef Santo Agnello.

“It as a very organic collaboration with Santo,” Mendín tells New Times. “We met while he worked at Lucali and I at Pubbelly." The two restaurants, both located in Miami Beach's Sunset Harbour neighborhood, share an alley and the two chefs eventually became friends after seeing each other on breaks.

The two then collaborated on the pizzas at the Piefather at the Wharf Fort Lauderdale. When the Wharf closed temporarily amid the pandemic, Agnello transferred to Rivertail, Mendín's Fort Lauderdale seafood restaurant.

Working side by side at Rivertail, Mendín and Agnello got creative. "We started cooking Italian dishes and came up with the idea for this restaurant,” Mendín recalls.

The new venture's name, Italian for “island house,” pays homage to the chefs’ origins. Mendín is a native of Puerto Rico, while Brooklyn-born Agnello’s family hails from Sicily, the largest island in the Mediterranean Sea.

Implementing a made-from-scratch approach, Mendín and Agnello offer the Italian dishes they like to eat at home with their families.

"The menu started with our takes on favorites. A lot of recipes are Santo’s household recipes and I’ve incorporated a lot of my flavors into the menu,” Mendín notes. “Santo has a foundation in rustic cuisine, while I am more modern in my cooking. In the end, it’s about maximizing everything that we can do to make each dish as flavorful as possible.”

Agnello’s eight-hour Sunday sauce, a hearty meal that includes a short-rib meatball, pork rib, and Italian sausage ($30) provides a snapshot of his Italian family's home cooking. “It is a staple in my heart,” says Agnello. "My mother and grandmother would start cooking the dish at 7 a.m. on Sundays and I would wake up to the scent wafting through the house."

Mendín is operating five different restaruant concepts in South Florida. In addition to Pubbelly Sushi, he's a partner at La Placita in Miami's MiMo District, as well as the aforementioned Rivertail and the Piefather in Fort Lauderdale.

The former Pubbelly Noodle Bar space, only steps away from Pubbelly Sushi, was shuttered for a year and a half because, Mendin says, he simply “couldn’t get rid of the lease.” In the end, he says it was for the best, because the space that won him several James Beard Award nominations holds a lot of sentimental value. “I really didn’t want to let it go."

Casa Isola. 1418 20th St., Miami Beach; 786-558-5787; casaisolamiami.com. Open Tuesday through Sunday from 5 to 11 p.m.
KEEP MIAMI NEW TIMES FREE... Since we started Miami New Times, it has been defined as the free, independent voice of Miami, and we'd like to keep it that way. With local media under siege, it's more important than ever for us to rally support behind funding our local journalism. You can help by participating in our "I Support" program, allowing us to keep offering readers access to our incisive coverage of local news, food and culture with no paywalls.
Make a one-time donation today for as little as $1.
Juliana Accioly
Contact: Juliana Accioly