Try What Guy Got on Diners, Drive-Ins, and Dives at 3 Sons Brewing

The Diners, Drive-Ins, and Dives-featured Gulf shrimp pizza has become a permanent menu item at 3 Sons Brewing Co. in Dania Beach. Photo by Magic Muncie for 3 Sons Brewing Co.
When you visit 3 Sons Brewing, you can order what Guy Fieri got during his recent trip to the Dania Beach brewery. The dishes from executive chef Nicolay Adinaguev — shrimp pizza and dashi butter chicken wings — were featured on Diners, Drive-Ins, and Dives last month and have since become permanent menu items.

The show's filming took place over a two-day period in January. Fieri himself arrived the second day, shadowing Adinaguev as he prepared a pie topped with Gulf shrimp, escarole, capers, garlic confit, capers, lemon vinaigrette, and a blend of pecorino, romano, and manchego cheeses ($18). The chef also prepared an order of wasabi-aioli and garlic butter chicken wings, seasoned with dashi and thyme ($10.25).

"He’s exactly like he is on camera. Very cool dude. It's like you’re talking to an old friend," says owner/brewer Corey Artanis about the Food Network celebrity. "Now everyone who comes in asks for the wings and pizza — and they’re not disappointed."

In the past few weeks, Fieri's followers have been flocking to the Broward brewery for a taste of the chef's wood-fired dishes, Artanis says. In response, the brewery will open its taproom seven days a week starting Monday, October 12. Due to the Broward County curfew, the brewery will be open from noon to 10 p.m. daily and will continue to operate at 50 percent capacity with both indoor and outdoor seating.

There's more to 3 Sons than its most popular menu items. Ardavinov's creativity, inspired by the seasons and his vast knowledge of global dishes, offers upscale eats prepared in the kitchen's wood-fired oven. 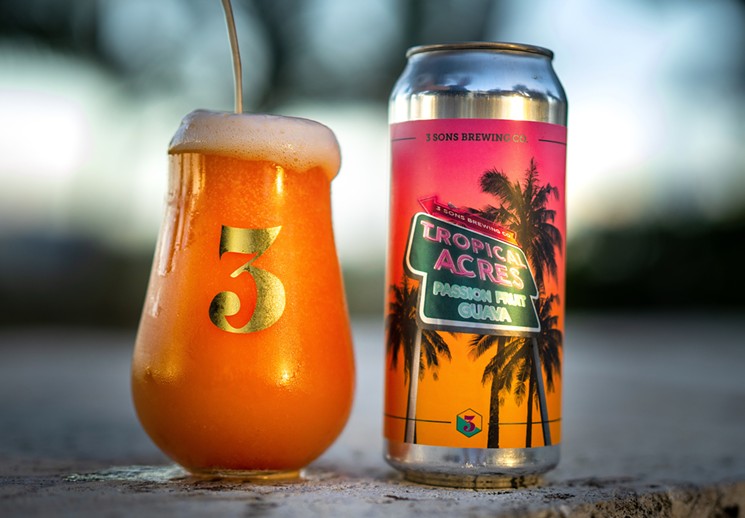 3 Sons Brewing Co. in Dania Beach is well-known for its fruited sour beer and barrel-aged stouts.
Photo by Magic Muncie for 3 Sons Brewing Co.
Offerings include wood-roasted tapas like the Asian-inspired elote seasoned with togarashi and topped with cotija cheese, lime, jalapeño, and spicy mayo ($5) and main plates like charred chili-glazed octopus and bourbon barrel-smoked ribs.

"Seasonal vegetables and meats always ensure the freshest quality ingredients for building our menu options, and, of course, we highlight a beer to pair with each dish," Artanis says. "When we do our limited series, ticketed beer pairing dinners, we always develop new recipes, many of which are infused with our beer and paired with a specialty, one-off beer brewed especially for the dinner."

Artanis, who began his brewing career as a nomad brewer, opened the Dania Beach brewery in March 2019. He continues to put just as much love into the liquid side of 3 Sons Brewing as he does the kitchen, offering world-class beers that pair perfectly with the brewery's upscale fare.

In the last few months, the brewery has upped its canning schedule, offering new beers for to-go sales each week in addition to releasing several small-batch bottles each month. Styles range from Artanis' barrel-aged dessert stouts and heavily fruited sours to lagers and IPAs.

"Having a home these past 18 months has provided us the opportunity to step up our game and showcase our artisanal food and variety of beers," Artanis explains. "There's something for every palate, from the foodies and beer connoisseurs to people just getting into craft beer."

3 Sons Brewery. 236 N. Federal Hwy., Dania Beach; 954-601-3833; 3sonsbrewingco.com.
KEEP MIAMI NEW TIMES FREE... Since we started Miami New Times, it has been defined as the free, independent voice of Miami, and we'd like to keep it that way. With local media under siege, it's more important than ever for us to rally support behind funding our local journalism. You can help by participating in our "I Support" program, allowing us to keep offering readers access to our incisive coverage of local news, food and culture with no paywalls.
Make a one-time donation today for as little as $1.