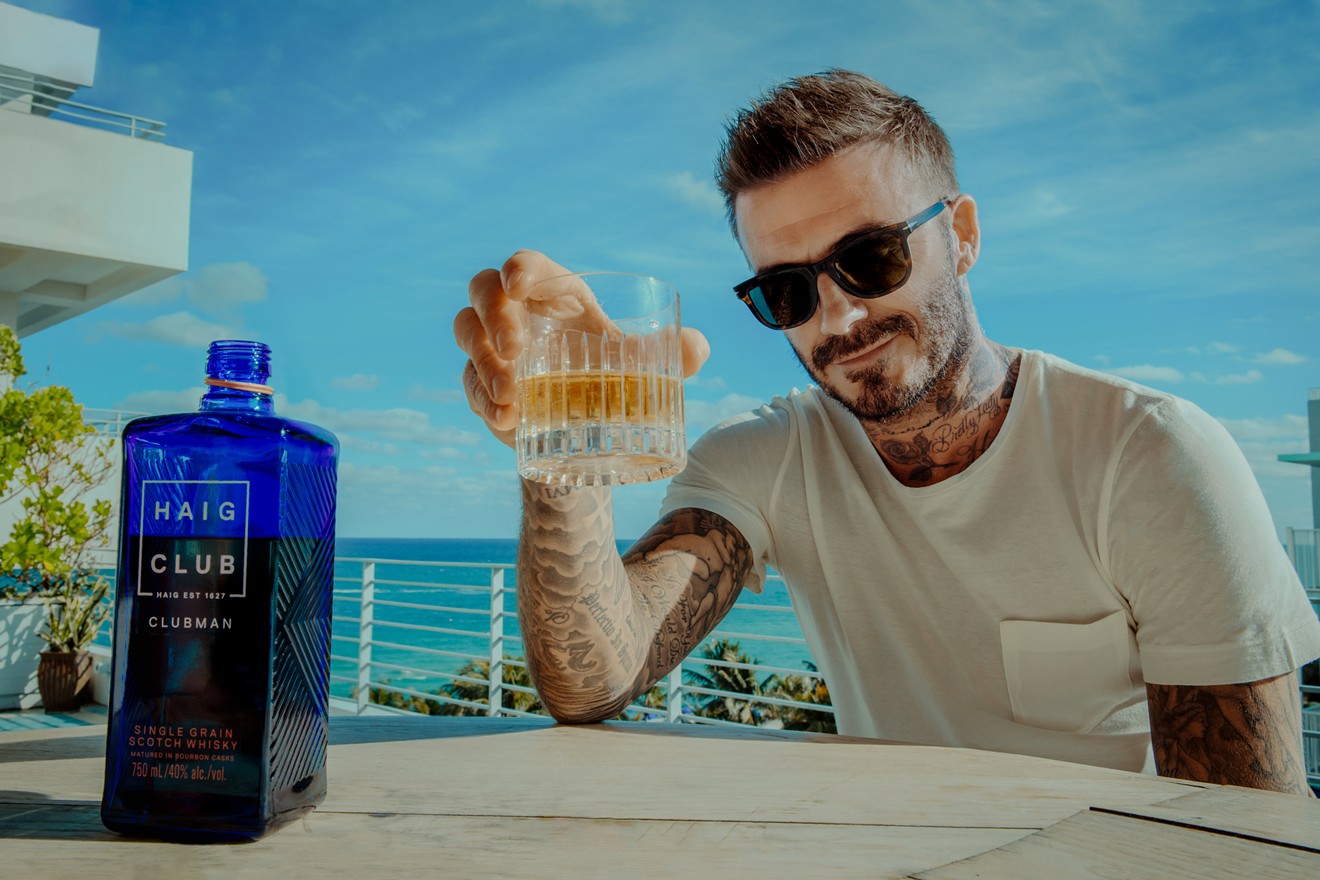 When he's not drinking a Cuban coffee, David Beckham is drinking his own Scotch. Photo by Conor McDonell
After what has felt like an eternity, David Beckham’s soccer club Inter Miami CF will play its first-ever home game on Saturday, August 22, against Orlando City. The seven-year-long project was supposed to come to fruition — along with the official U.S. launch of his Haig Club Clubman Scotch whisky — back in March, the very weekend the world seemed to shut down.

Beckham, who dreamed of this day for many years is elated to be able to call Miami his part-time home. The London native has adopted Miami and its food and cultures, even taking a stab at hand-frothing his own Cuban coffee and creating the perfect espuma, which he says just isn’t the same outside of the humid tropics of Miami.

Like most non-locals, he admits he often has two or three shots of  Miami's own liquid fuel and then can’t sleep but does it over and over because it’s totally worth it.

He also shared a story involving his youngest son, Cruz, who, as a big fan of the movie Chef, begged his dad to take him to Versailles for a sandwich just like Jon Favreau’s character did with his son on their visit to Miami. “It’s probably the best thing he thinks I’ve ever done for him,” Beckham says of the visit to Versailles.

When it comes to bars, a favorite Miami spot of the soccer star’s is Spanglish in Wynwood. Beckham says he marvels at co-owner Hector Acevedo’s talent — not merely his bartending, but also the flair he exhibits when preparing espresso martinis for a crowd.

Not coincidentally, those martinis are made with Beckham’s Haig Club Clubman.

Beckham has worked with the liquor giant Diageo to create a product that aims at mass appeal and not merely among whiskey drinkers. The brand has been available in the U.K. and other markets, but Miami is the first U.S. city to carry the spirit, which launched here quietly in March and now can be ordered in restaurants around town.

“Normally, whiskey is seen as something where there’s an older man sitting in front of a fire and enjoying it, but we wanted to be disruptive and change the game,” Beckham says of the single-grain spirit that’s designed for mixing and using in cocktails.

“If you’re not a whiskey drinker, then this is a great place to start," he says, adding that his wife, Victoria Beckham, "tried it for the first time a few years back and was shocked by how smooth and easy to drink it was — and she’s not at all a whiskey drinker.”

When fans are able to watch Inter Miami compete in person, they'll be able to order specialty drinks featuring Haig Club Clubman — including the Inter Miami CF mojito, a twist on the popular classic Cuban cocktail made Haig Club Clubman, guava, lime, and simple syrup; and the H.O.T., a highball made with Beckham’s whiskey, tonic, and a twist of orange.

“It’s been one of those things in my life that’s been harder than anything I thought could be," Beckham says of the seven years leading up to the launch of the team, the stadium, and the Scotch. "It’s been a roller coaster, but the last two years have been the most surreal.”
KEEP MIAMI NEW TIMES FREE... Since we started Miami New Times, it has been defined as the free, independent voice of Miami, and we'd like to keep it that way. With local media under siege, it's more important than ever for us to rally support behind funding our local journalism. You can help by participating in our "I Support" program, allowing us to keep offering readers access to our incisive coverage of local news, food and culture with no paywalls.
Make a one-time donation today for as little as $1.