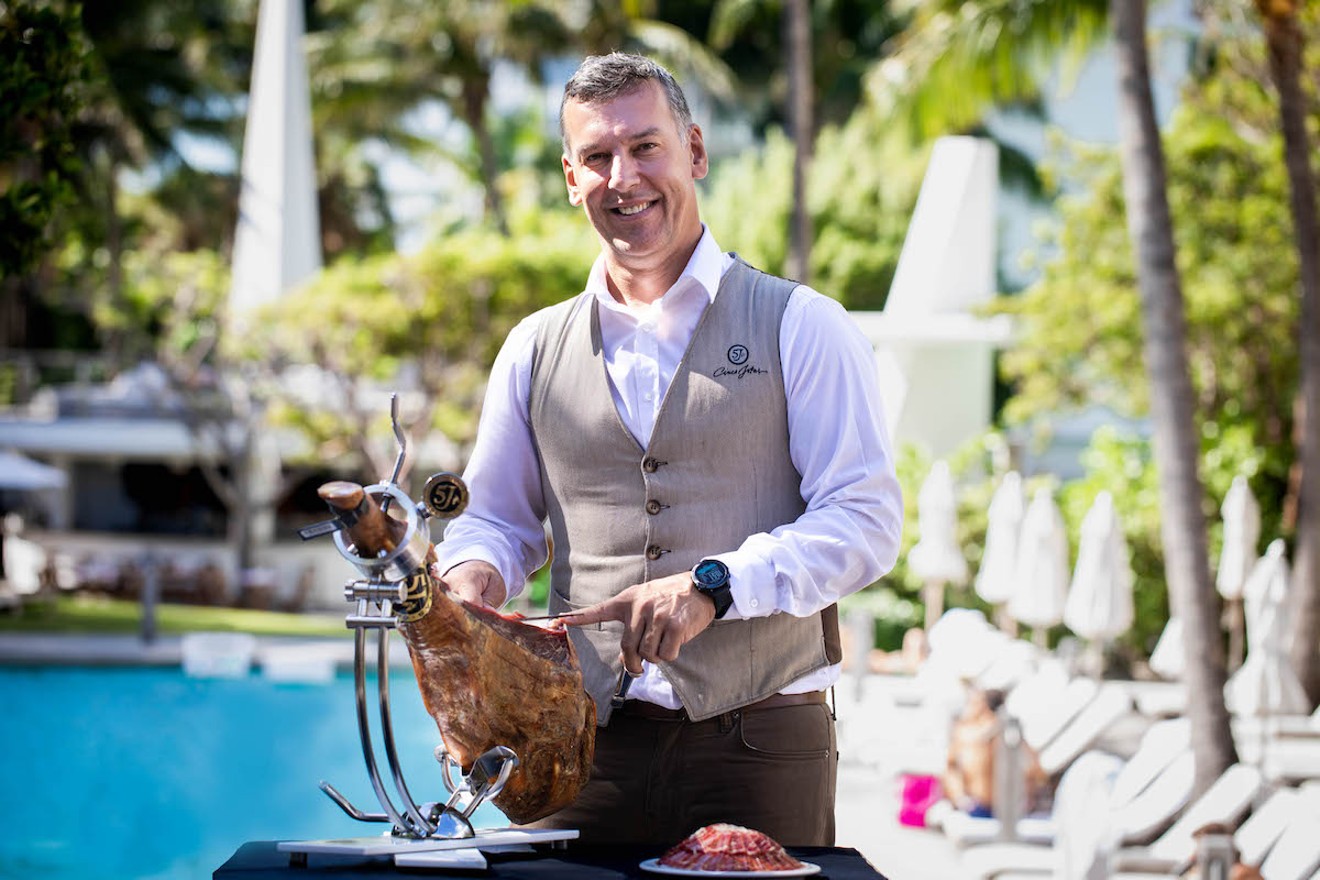 Cinco Jotas master carver Luis Osa will be in Miami demonstrating his craft during the company's GastroTour. Photo courtesy of Cinco Jotas
A new culinary event is making its way to Miami, and it's putting the spotlight on jamón Ibérico.

For the first time, South Florida diners can take part in a culinary adventure celebrating Spanish food and the tradition of tapas at some of the region’s best restaurants.

Later this month, a unique Spanish tapas tasting tour will take over the Magic City, offering locals a chance to taste a collaboration between Cinco Jotas Ibérico ham and more than a dozen Miami chefs.

To date, a total of 13 area restaurants have teamed up with Cinco Jotas for its GastroTour, a tapas-tasting journey where each chef will prepare signature dishes using Cinco Jotas.

Founded in 1879, Cinco Jotas is a premium Ibérico ham. The native Iberian pigs — raised free-range in the woodlands of Jabugo in southwest Spain, where they feed on acorns, roots, and herbs — are considered one of the country's national treasures.

According to Angel Barriopedro, the North America director for Cinco Jotas' parent company Grupo Osborne, the idea behind the tour was to bring a taste of Spain to Florida.

"If Miami can’t get to Spain, Spain will come to Miami," Barriopedro tells New Times. "Our goal is to host a GastroTour in a new city every year. We have our eyes on Los Angeles or Chicago for 2023."

Cinco Jotas first launched the concept in London in 2019. The first GastroTour held in the U.S. was in New York City in March 2020, just before the COVID-19 pandemic. It returned to New York City in November 2021 with a new initiative.

The Miami GastroTour will run from October 20 through November 3, during which diners can visit participating restaurants to try specialty dishes highlighting Cinco Jotas' acorn-fed Ibérico ham.

During the event, Cinco Jotas' master carver Luis Osa will also be on hand to demonstrate how to carve jamón Ibérico at participating restaurants.

Dishes at each restaurant will be priced at $40 or less.

"We’re very excited to bring a taste of Spain to diners in South Florida," sums up Barriopedro. "The culinary scene here has exploded in the past few years with Michelin-rated restaurants such as L’Atelier de Joël Robuchon, Ariete, and Cote. Cinco Jotas is the jamón used by some of the best chefs and restaurants in the world, and we wanted to work with some of the best talent here to bring the Cinco Jotas experience to Miami diners."

Cinco Jotas GastroTour. Thursday, October 20, through Thursday, November 3, at various locations; cincojotas.us.
KEEP MIAMI NEW TIMES FREE... Since we started Miami New Times, it has been defined as the free, independent voice of Miami, and we'd like to keep it that way. With local media under siege, it's more important than ever for us to rally support behind funding our local journalism. You can help by participating in our "I Support" program, allowing us to keep offering readers access to our incisive coverage of local news, food and culture with no paywalls.
Make a one-time donation today for as little as $1.