From Prison to Pandemic, a Miami Chef Pops Up With Something New 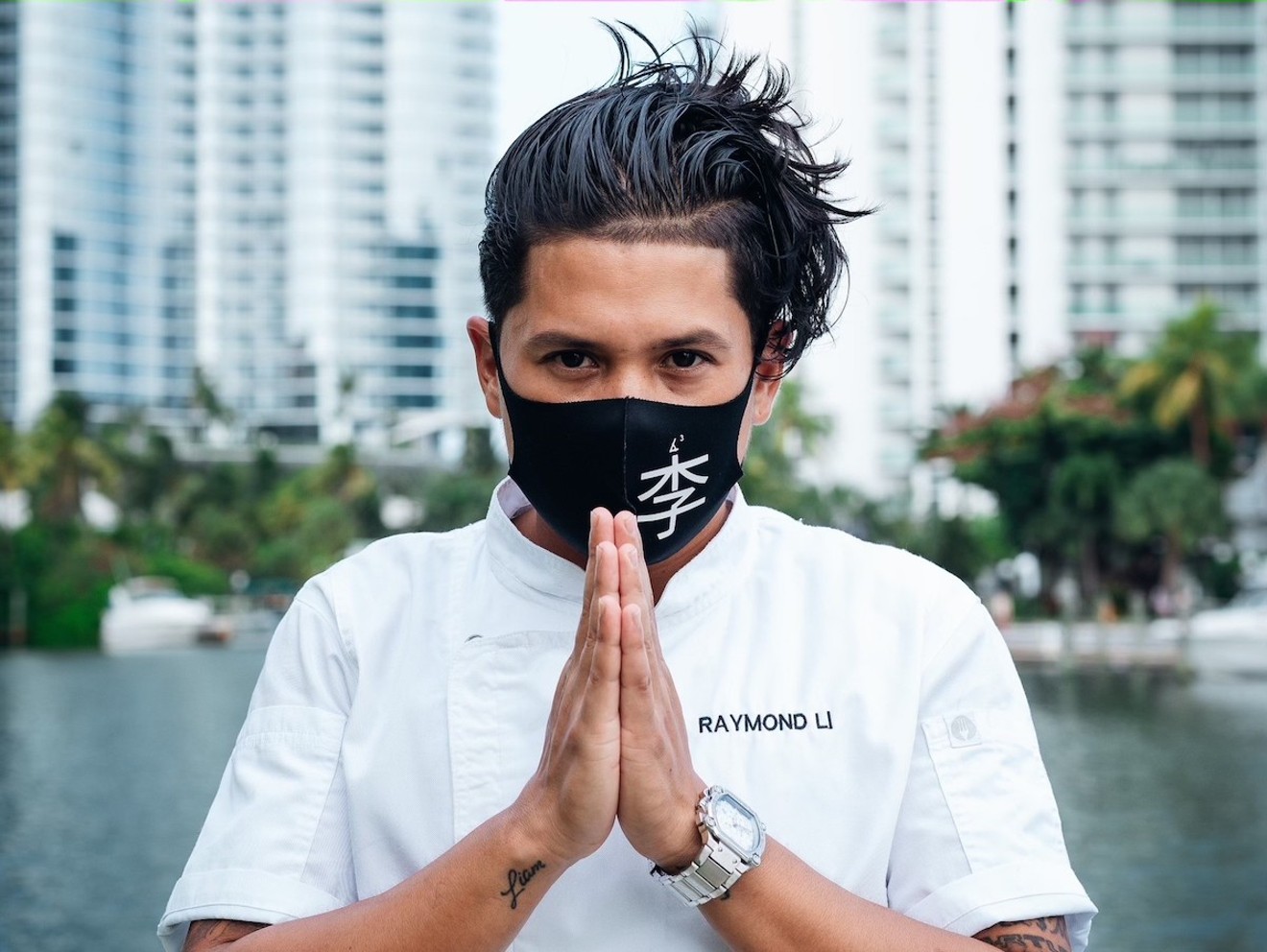 “It all started with people telling me over and over again, 'You should be a chef',” Li tells New Times. "Growing up, I never thought I'd be a chef. But I found refuge and identity in the kitchen."

Li, 33, was born to a Colombian mother and a Chinese-Cuban father and grew up in Kendall. His childhood was good, but he found trouble in his late teens, when he made decisions that quickly altered the course of his young-adult life.

Li has told his story before, sharing snippets of the darker moments of his past. It's one that follows the path of gangs, selling drugs, and, later, jail time.

As a teenager, Li began selling pot and then Xanax to make some money. In high school, he joined a gang where he was tasked with moving large amounts of cocaine. In 2008, just before graduation, he was arrested and charged with a second-degree felony for a drive-by shooting incident. Though Li stresses that no one was injured, the teen had already had a few run-ins with the law and was on probation. He wound up being held without bond for eight months at Turner Guilford Knight Correctional Center before finishing his one-year sentence at Union Correctional Institution in Raiford.

Today, Li will tell you that jail didn't merely save his life. It also awakened a part of him he didn't know existed.

"Cooking was in my blood. I just didn't know it," he says. "Little by little, I began to tap into my Chinese heritage, my roots, and it all made sense. And now I’m able to do something I love, and something that’s true to me.”

Lo mai gai, a specialty dish prepared with the house-made Chinese sausage known as lap cheong.
Photo by Jonathan Duarte
The prison-to-kitchen story is by no means a new narrative. A 2017 documentary, Knife Skills, secured an Oscar nomination for chronicling the story of former inmate Brandon Chrostowski, who launched Edwins, a fine-dining restaurant in Cleveland, Ohio, that trains formerly incarcerated adults in culinary skills and employs them in the hospitality industry. Much has been written about Jeff Henderson, who spent 33 years behind bars before opening his own restaurant, writing a book, and starring on his own Food Network show. And Candido Ortiz, who honed his chef skills during a quarter-century stint in federal prison, now owns a restaurant in Jersey City.

Recalling his past, Li can laugh as he ticks off the only two job offers he received after his release in 2009: Party City and a busser position at a Cool de Sac in Hallandale Beach.

“That's where the magic started,” Li says of choosing the latter.

It wasn't long before he moved on to expediter, calling out orders. Next, he was jumping on the line to help on busy nights. When the cooks asked if he could stay, it was an organic progression. His coworkers saw promise and encouraged him to enroll in a culinary program.

"I heard it so many times, I made the decision to go to Cordon Bleu," says Li. "That's when I realized this was my calling. It was all making sense to me. I thought: Wow, I've found my path."

In 2016, the newly minted cooking-school grad applied for a position as a line cook at the Ritz-Carlton Bal Harbour, where he was put to work preparing the daily amuse-bouche. From there he took a position as chef de partie at Zuma, then worked as lead line cook at Matador Room by Jean-Georges Vongerichten under Top Chef winner Jeremy Ford.

When contacted by New Times, Ford called Li a "beast" in the kitchen. "When the restaurant got busy, he handled the high pressure environment with a lot of focus," Ford elaborated, adding, "He's just a great human being."

Looking to move up the ranks in the kitchen, Li went to San Francisco to stage as a line cook in Corey Lee's kitchen at Benu.

By 2018, he was working as chef de cuisine at Palmar, the Miami-inspired Chinese restaurant in the Wynwood Arts District where he worked up to executive chef. The job also provided an introduction to Miami restaurateur Juan Manuel Barrientos, who now plans to open a fine-dining concept in Colombia with Li under the umbrella of Barrientos' Elcielo Group. (The restaurant, while still in the works, has been sidelined owing to COVID.)

Charred broccoli rabe with a passionfruit tonkatsu sauce and furikake.
Photo by Jonathan Duarte
While Li appreciates how the struggles of his past got him where he is today, they're no longer the only part of his story he wants to share. Instead, his focus is on the future — one that has been shaped in large part by the COVID-19 pandemic.

In early March of last year, the young chef was traveling back from California after a short collaboration stint at a Los Angeles restaurant. The purpose of the trip was to find inspiration for a new tasting menu he was preparing, but it never happened.

Instead, he returned to a statewide shutdown, and no job.

"At first, I wasn't doing anything during the pandemic," Li recounts. "But people kept asking me, 'Why aren't you making food?' I had to make something happen."

With a quick post on Instagram one Sunday night in May 2020, Li launched his takeout-only pop-up, Li’s Dim Sum & More. A handful of local foodies shared the post, and the first night of service earned him close to $3,000.

Now the pop-up offers dinner service Thursday through Saturday from 6 to 10:30 p.m. It's based out of MKT Kitchen on Ponce de Leon Boulevard, taking over the lunch spot after hours.

And it’s not only an opportunistic pandemic project; it’s also a joint venture between Li and his father, Raymond Li, Sr.

Li recalls weekend mornings watching his father in the kitchen preparing dumplings for the family on special occasions. He recalled his father's kitchen skills from earlier days and asked the senior Li if he wanted to help in this new venture. His father, retired and a little bored from staying home during the pandemic, jumped at the chance.

“This is a family-oriented business. A father-and-son business. I see my friends Nando and Valerie Chang [of Itamae] and how they work with their father. It's a beautiful thing,” says Li. “I told my father, 'Let's do this. Let's do what we do best.'"

Chicken bao at Li's Dim Sum & More.
Photo by Jonathan Duarte
At the little dim sum place, Li operates with a skeleton crew: Just three in the back of house, three in the front of house. His father is there, too, preparing the six styles of dumplings and siu mai alongside his son.

The menu encompasses multicultural twists on dim sum items including bao, dumplings, siu mai, and lo mai gai (lotus leaves stuffed with house-made lap cheong and sticky rice). The “and more” section taps into Li's Latin-Asian fusion side, with offerings like a fish crudo of the week — the first of which was served with a yuzu soursop leche de tigre — and papas bravas with char siu ($5 to $16).

The father-son duo’s specialty, however, is a four-piece Shanghai siu mai. Unlike its more delicate Cantonese cousin, this style is a doughy pocket stuffed with glutinous sticky white rice cooked with seasoned minced pork and fermented mustard greens.

Keeping with the family vibes, when guests attend a dinner they're greeted with a collage of Li family photos, a homage to the chef's continued inspiration, including his young son Liam.

"I want to bring flavors that people understand and know, but through food they may not have been introduced to before," says Li. "Moving forward, I see opening Li's Dim Sum in different locations. It's fun, fast, inexpensive, really good food, and that's something I can grow quickly."

"Right now, nothing is more satisfying than being tired and stressed out about my own business," Li says. "My vision has finally become reality, and I'm so grateful and excited to see what's going to happen next.”

Li's Dim Sum & More. 1831 Ponce de Leon Blvd., Coral Gables; 305-882-2600; lisdimsum.com. Open Thursday to Saturday 6 to 10:30 p.m.
KEEP MIAMI NEW TIMES FREE... Since we started Miami New Times, it has been defined as the free, independent voice of Miami, and we'd like to keep it that way. With local media under siege, it's more important than ever for us to rally support behind funding our local journalism. You can help by participating in our "I Support" program, allowing us to keep offering readers access to our incisive coverage of local news, food and culture with no paywalls.
Make a one-time donation today for as little as $1.