It's just one of the unique features of this South Florida coffee shop chain, where customers can create their own "selfieccino" thanks to a machine that can print edible images on foam-capped drinks.

Abreu and Baretta tell New Times they never saw themselves going into the coffee business, but inspiration hit when they discovered a plea from Parkland locals for a coffeehouse on a community social message board.

A few months later, they teamed up to develop a side hustle business that could offer both a creative and caffeinated outlet from their mutual career background in chemical engineering. In 2018, they opened the first location of Carmela Toast & Coffee Bar, giving Parkland their take on a neighborhood coffeehouse and avocado toast bar.

"We didn't have any independent coffee shops, so without knowing much about the business, we decided to open one," says Abreu, adding they quickly outgrew the 1,000-square-foot store, later expanding to double their footprint when the space next door became available. "Little did we know it would be a hit, much less that we were building a franchise brand."

At the time, the business partners had no intention of creating a local brand, but less than a year later, they had a second location in Pompano Beach, bringing their comfort-oriented coffee shops across South Florida.

During the pandemic, the duo created a mobile application for online ordering and deliveries, helping to fuel business growth despite the shutdown of dining rooms. Then, in 2021, they expanded into a franchise model, opening their first partner location in Delray Beach, followed by Boca Raton and West Palm Beach. 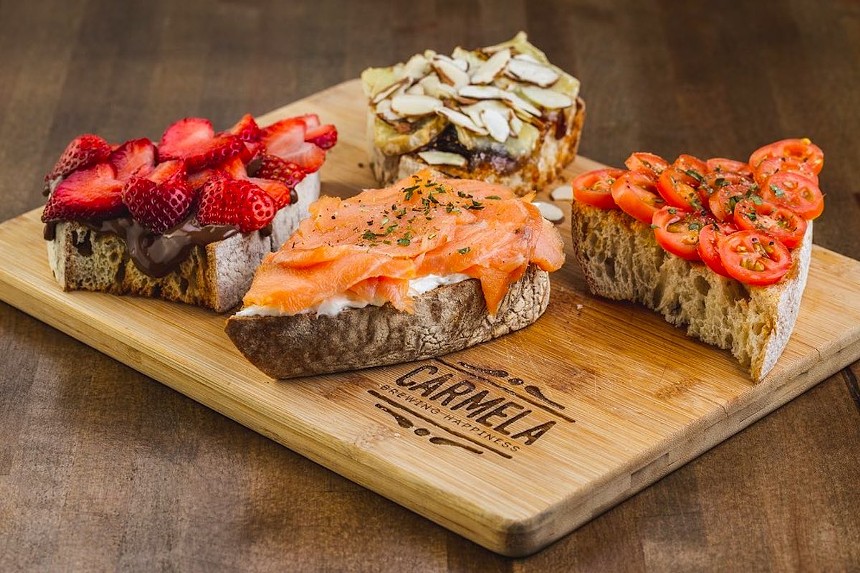 In addition to its new locations, Carmela plans to expand its "selfieccino" station to all its stores. The service is available at the East Boca Raton store at 3200 N. Federal Hwy., where the innovative technology allows patrons to customize their cappuccino or latte art with edible, espresso-based ink.

After connecting to Wi-Fi, guests can access the machine's cloud-based library that offers thousands of royalty-free designs or upload and share their own branded images and photos.

"We've had people print selfies, pictures of their pets, messages for friends — we've even had someone propose," shares Abreu. "It's super cool to watch. It happens in seconds, and the images are so precise."

But it might just be Carmela's other Instagram-worthy offerings that draw repeat customers. To date, its creators admit their stores sell more avocado toast than coffee.

"When we were developing the business plan, we knew we weren't going to just be a coffee bar, so we decided to create a food menu, something else to make us stand out," explains Abreu. "The toasts became so popular, we even rebranded recently to include 'toast' in the name."

With more than a half dozen takes on avocado toast, including a build-your-own option, Carmela's main menu item has a special place in their customers' hearts (and social media accounts), says Abreu.

Today, nearly a dozen signature avocado toasts feature several mix-and-match ingredients, from prosciutto, poached egg, or smoked salmon to strawberries, arugula, or burrata. Each toast is made using a locally baked, thick-sliced ciabatta bread delivered daily and topped with a heaping portion of fresh-sliced avocado — each location goes through hundreds a day —  fresh to order.

"South Florida has really embraced Carmela," sums up Abreu. "We're grateful to be a part of this community and to share our vision and community meeting spaces with so many people."
KEEP MIAMI NEW TIMES FREE... Since we started Miami New Times, it has been defined as the free, independent voice of Miami, and we'd like to keep it that way. With local media under siege, it's more important than ever for us to rally support behind funding our local journalism. You can help by participating in our "I Support" program, allowing us to keep offering readers access to our incisive coverage of local news, food and culture with no paywalls.
Make a one-time donation today for as little as $1.