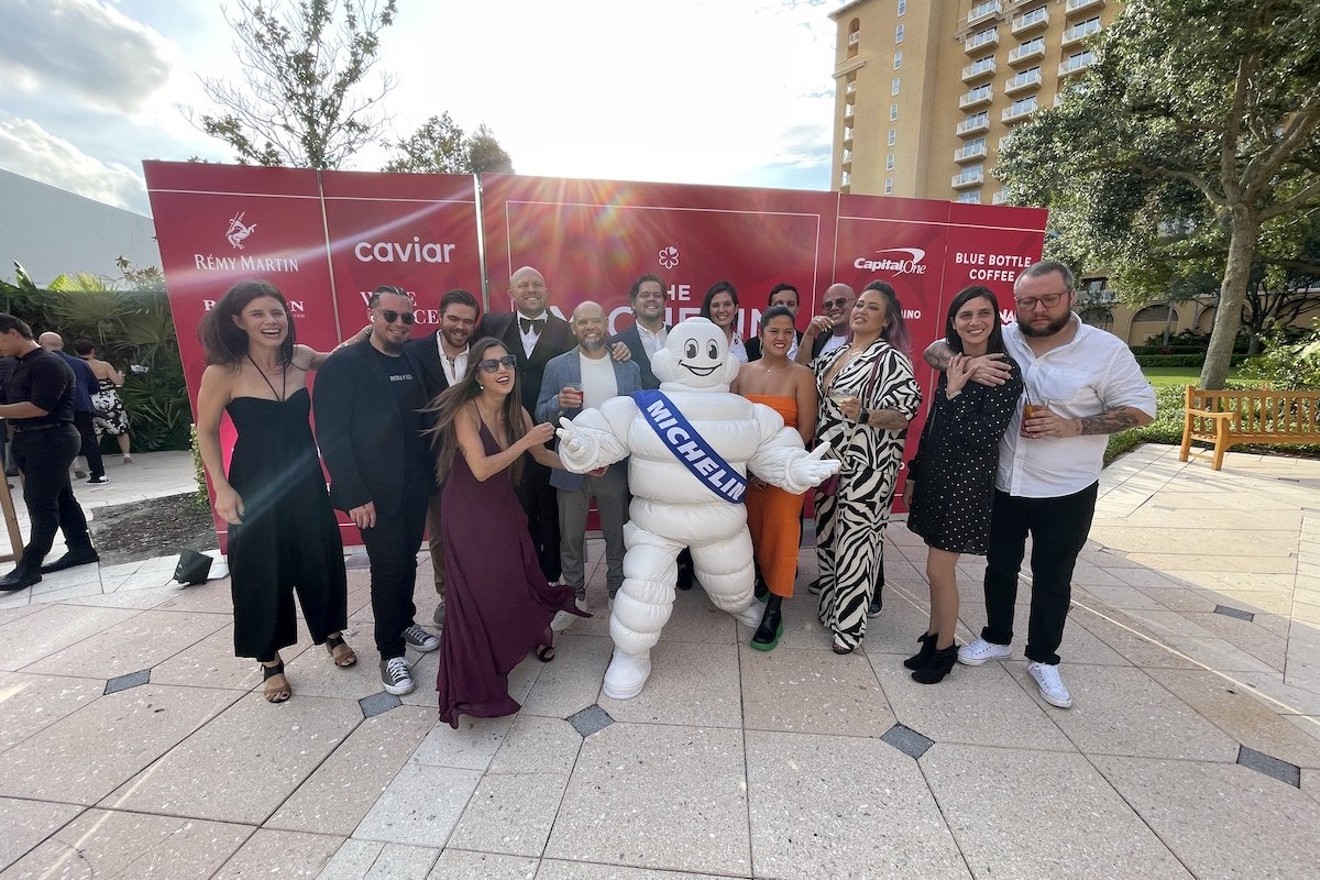 Miami chefs made the trip to Orlando to hear who made the Michelin Guide's cut. Photo by Laine Doss
Last week, chefs from Miami, Orlando, and Tampa celebrated at the Michelin Star Revelation Ceremony, held at the Ritz-Carlton Orlando.

There, the restaurants that received a "Bib Gourmand" — reserved for an establishment where a diner can enjoy a meal for less than $50 — one star, or two stars were announced.

The Florida Michelin Guide, however, listed many more restaurants — 118 in total in Florida, with 65 Miami-area restaurants earning a spot.

Though only 11 Miami restaurants received one or more stars, don't underestimate the importance of any mention on the list. The Michelin Guide is recognized worldwide by savvy diners who seek out the restaurants deemed worthy of the team of inspectors Michelin hires to dine at hundreds of establishments in search of the finest cooking and the best values.

On Monday, June 13, winners of the annual James Beard Awards were announced, with Miami once again finding itself shut out (only Zak the Baker's Zak Stern was in the running for recognition). This only makes the Michelin Guide more important for Miami's culinary community.

Mohamed “Mo” Alkassar, a founding partner, with Niven Patel, of Alpareno Restaurant Group, says the Michelin Guide is a game-changer for Miami restaurants. One of the partnership's restaurants, Ghee Indian Kitchen, received a Bib Gourmand nod, and Orno is listed in the Guide.

"Just the fact that the Michelin Guide is here now makes everything different. You can feel it. You can feel an electric, positive vibe all around the city. We shared this with all our staff, we called our associates."

The Michelin Guide also gives people a reason to talk about Miami's dining scene. This past week, conversations revolved around who got a place on the list and who didn't. Miami's culinary scene has taken the national spotlight.

In a more direct sense, the Michelin Guide's 65 picks are a good place for all Miamians to expand their culinary horizons.

Most restaurants on the list are affordable, so you don't have to wait for a special occasion to dine at a "Michelin restaurant." For every lavish Surf Club or L’Atelier de Joël Robuchon, there's a Phuc Yea or Josh's Deli.

With that in mind, here is a list of all 65 Miami restaurants included in the 2022 Michelin Guide. If you start now, you can probably eat your way through all of them before the 2023 Guide is published. (You can find Michelin's tasting notes for each restaurant here.)