Miami Dolphins Have Second-Worst Fan Base in NFL, According to New Rankings 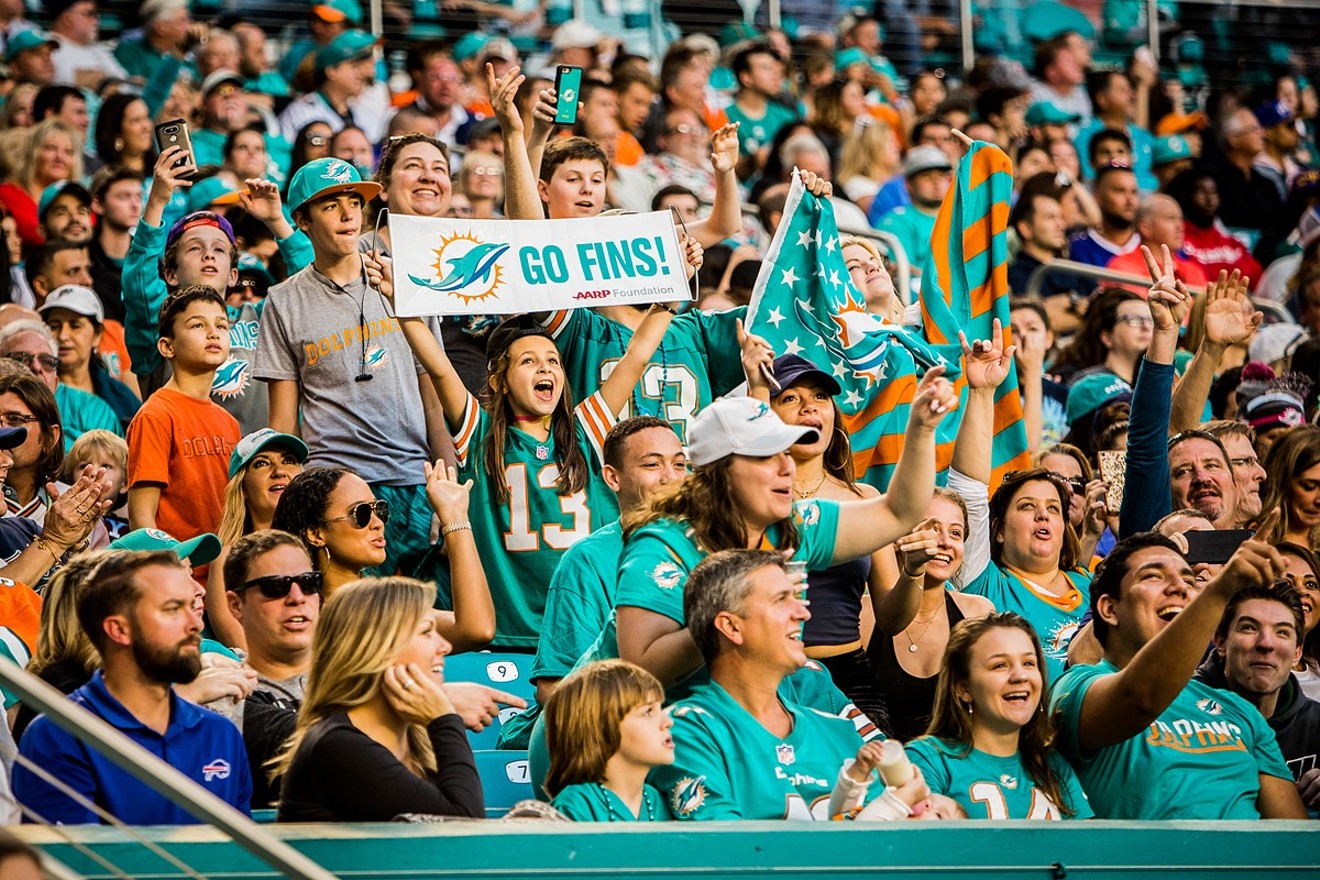 There's no shortage of Dolphins fans piling into games. Photo by Ian Witlen
Miami Dolphins fans have seen some things in their day. For a fan old enough to remember the '70s teams, the Dolphins have swung both ways on the hierarchy pendulum of the NFL. For younger fans, their entire lives have been filled with disappointments, broken promises, and, as an annual tradition, false hope that comes every offseason.

One thing you can't say about Dolphins fans, however, is that they're bad. If the Miami Dolphins had a bad fan base, or even worse, a nonexistent one, the stadium wouldn't be as full as it is in non-COVID times and nobody would care about all the failures the franchise has seen over the past two-plus decades.

It appears the people over at Yardbarker, however, do not agree. The sports news site says Dolphins fans are the second worst in the NFL, barely edging out the Arizona Cardinals.

But the reasoning behind the ranking is rather odd. It's almost as if Yardbarker isn't blaming Miami for being bad at supporting the Dolphins because, well, it's Miami. Here's a snippet of what the author writes about the Dolphins' fan base:

First of all, thank you? While we appreciate Yardbarker acknowledging the very obvious, that Miami is an awesome place with fantastic entertainment options, it's a tired and old take to have about sports fans.

Every city has a plethora of things to do. Well, maybe not Buffalo, but you get the point. Miami is more of an event town than a sports town, but the thing about an NFL game is that it is, by definition, an event because it only happens ten times a year, at most.

There's no shortage of Dolphins fans piling into games. In 2019, Hard Rock Stadium was 95 percent full, on average. That's better than a stadium like Heinz Field, where the Pittsburgh Steelers play,  and many believe the Steelers have some of the best fans in the NFL.

Another sure sign there are Dolphins fans who care? New quarterback Tua Tagovailoa had the best-selling jersey in the NFL for multiple weeks this season. Someone is buying those, and if you've seen the Dolphins' uniforms, you know it's not about fashion. These are fans spending their hard-earned money to rep their team.

We could go on all day, but we just felt the need to highlight how ridiculous this ranking is. Dolphins fans are a lot of things, but bad at supporting their long-irrelevant team isn't one of them.
KEEP MIAMI NEW TIMES FREE... Since we started Miami New Times, it has been defined as the free, independent voice of Miami, and we'd like to keep it that way. With local media under siege, it's more important than ever for us to rally support behind funding our local journalism. You can help by participating in our "I Support" program, allowing us to keep offering readers access to our incisive coverage of local news, food and culture with no paywalls.
Make a one-time donation today for as little as $1.