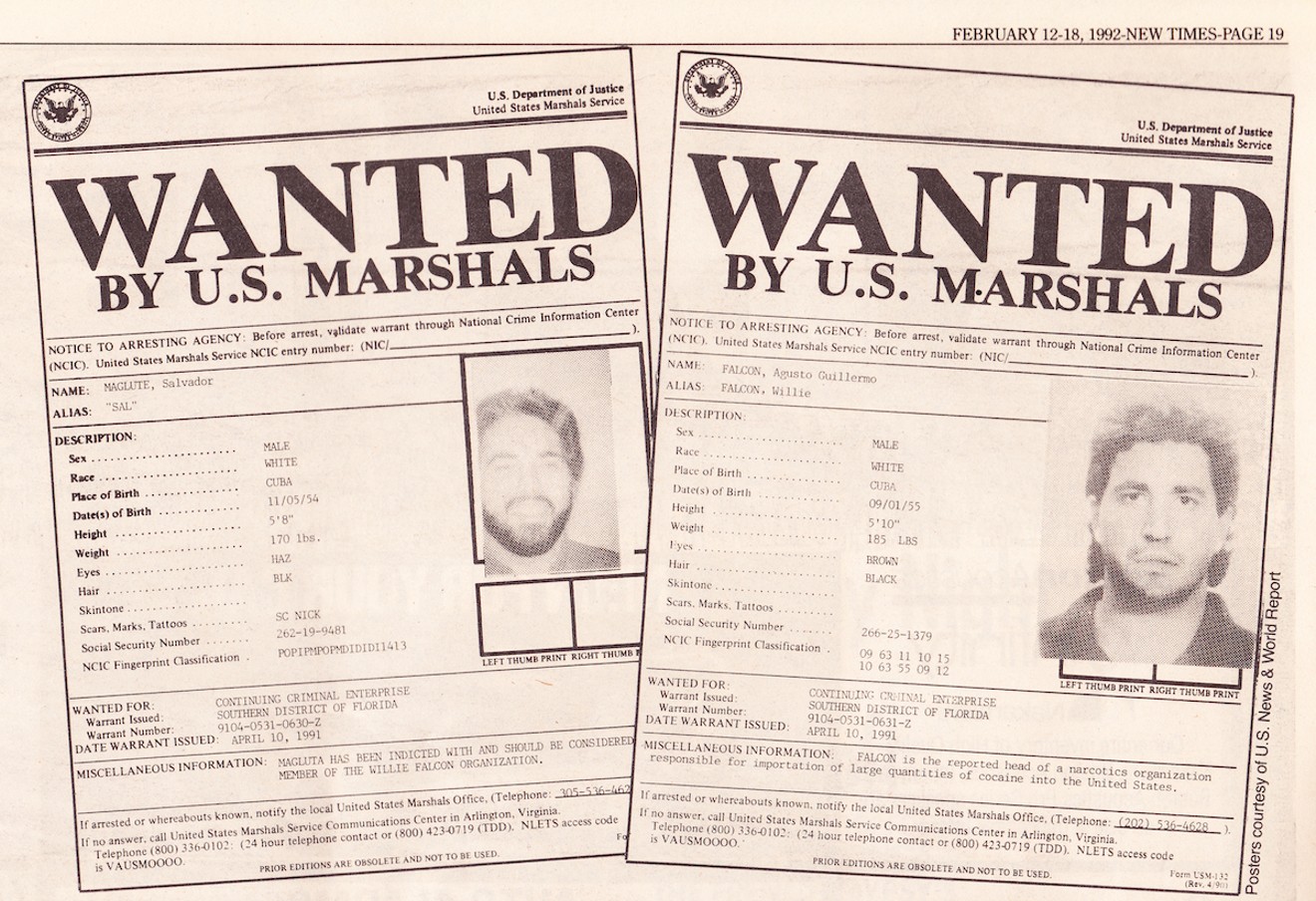 FBI "Wanted" posters for Sal Magluta and Willy Falcon, dated April 1991 Miami New Times screenshot
Editor’s note: Below is the second of ten in-depth stories Miami New Times published about the federal government's dogged pursuit of Augusto Falcon and Salvador Magluta — AKA Willy Falcon and Sal Magluta, AKA Willy and Sal, AKA "Los Muchachos," AKA "The Boys" — two Cuban-American boyhood friends from Miami who grew up to head what was alleged to be the most lucrative cocaine empire in South Florida for nearly 20 years beginning in the late 1970s.

When the two Miami Senior High School dropouts were finally captured by federal agents in October of 1991, prosecutors alleged that they’d amassed more than $2.1 billion in cash and assets by smuggling at least 75 tons of cocaine into the United States over the years.

But that was only the beginning of the legal proceedings against Willy and Sal, which dragged on for nearly a decade, dogged by law-enforcement snafus, doomed prosecutorial strategies, numerous incidences of jury tampering, escapes, murders, and other mayhem.

This is a news story by then-Miami New Times staff writer Jim DeFede, originally published in the paper's March 11, 1992, issue and titled “Person to Person From Willy & Sal.” The short piece recounts an incident in which Falcon and Magluta were placed in "administrative detention" and locked in their respective quarters for 23 hours each day. Guards at the Metropolitan Correctional Center in southwest Miami-Dade had found a cell phone hidden near where the inmates were being held while awaiting trial.
Willy Falcon and Sal Magluta didn't climb to the highest echelons of the drug world by sitting on their duffs and letting life pass them by. They were go-getters who turned adversity into opportunity. And in the process, federal prosecutors say, the partners built an empire. So it should come as no surprise that they might not have waited passively in jail for their October drug trial.


During a routine search at the Metropolitan Correctional Center in early January, guards discovered a cellular phone hidden in a cell on the same floor where Falcon and Magluta were being housed. "We have information to believe they were the ones for whom the phone was brought in," says Dena Davion, a spokeswoman for the federal jail in southwest Dade. At the prisoners' request, says Davion, the phone was smuggled into the facility by a jail employee, who admitted he was paid $800. The employee, whom Davion says is not a guard but would not otherwise identify, has been fired but is cooperating with authorities.

The details of an internal prison investigation can't be released, Davion adds, because a federal judge has placed restrictions on what information about the incident can be made public. Several law enforcement sources, however, have said the FBI is pursuing a criminal investigation into security problems at the federal jail.

Jail officials aren't sure what Falcon and Magluta were doing with the cellular phone. "The calls weren't recorded, so we don't know. They could have just been calling their mothers," Davion says. "What we believe is they were continuing their business and they may have plotted an escape attempt."

Augusto Falcon and Salvador Magluta's "business," say federal prosecutors, is drug smuggling. A 24-count federal indictment brought against the pair last year alleges that the pair ran the largest cocaine smuggling operation on the East Coast and one of the five largest in the world. From the late 1970s, when they started their enterprise, until their arrest this past October, federal agents claim Falcon and Magluta imported nearly 75 tons of cocaine, worth more than two billion dollars.

Since the cellular phone was found January 3, Falcon, Magluta, and Orlando "Benny" Lorenzo, another alleged member of the drug ring, have been placed in "administrative detention" and remain locked in their cells 23 hours per day. They are forbidden to socialize with other inmates and to watch television, are permitted only three showers per week, and their access to exercise facilities and visitors has been restricted.

"They've got plenty of money and they've got nothing better to do. And they don't like being in administrative detention."

In addition to a criminal defense team that includes some of the nation's best-known attorneys, the former power-boat racing champs have enlisted yet another law firm — Sonnett, Sale & Kuehne — to help with their current woes. In mid-January, Falcon, Magluta, and Lorenzo filed a federal lawsuit against the U.S. Bureau of Prisons, demanding that they be returned to the general jail population and be awarded an undisclosed amount of money. The lawsuit claims jail officials violated the prisoners' rights by segregating them, and also that Magluta was not provided proper medical treatment for his ulcer.

Davion says it is highly unusual for inmates to hire attorneys to challenge the status of their housing. "They've got plenty of money and they've got nothing better to do," she muses. "And they don't like being in administrative detention."


Benson Weintraub, the prisoners' attorney in the civil case, says he has not seen any evidence that links his clients to the cellular phone and adds that he recently spent nine hours deposing Lt. Steven Morton, head of the jail's Special Investigations Section. Weintraub argues that the fired jail employee's account is unreliable, because that individual would be willing to say anything in order to avoid prosecution.

To date, only Magluta has received written notice that he is being accused of smuggling the phone into the jail, Davion says, and adds that if a disciplinary hearing determines that Magluta did take part, he could be subjected to even tighter restrictions. Despite jail officials' belief that Falcon and Lorenzo also took part in the scam, no hearings have been scheduled for them, Davion says. They will, however, both remain in detention.

Jail administrators consider a cellular phone to be a serious breach in security. Prisoners normally are permitted access to telephones, but all of their calls are monitored. A cellular phone bypasses all such measures.

According to court records, jail officials have met with U.S. District Court Judge Donald Graham at least once, in a closed-door meeting, to discuss the information they have gathered about the phone, and, presumably, for what purpose they believe it was being used. Benson Weintraub, who was excluded from that meeting, is now asking the court to provide him with a transcript.

One federal law enforcement source says information is being kept confidential because a federal grand jury has been hearing evidence of wrongdoing at the federal jail, including, but not limited to, the incident involving the cellular phone. At the time the phone was found, other improprieties, which did not involve Falcon or Magluta, were uncovered, and a second jail employee was also fired.

"There were other things discovered at the time," Davion confirms, but she refuses to elaborate. She does say the FBI is investigating alleged criminal misconduct within the jail. Spokesmen for the FBI refuse to comment on the matter.

Originally published in the March 11, 1992, issue of Miami New Times.
KEEP MIAMI NEW TIMES FREE... Since we started Miami New Times, it has been defined as the free, independent voice of Miami, and we'd like to keep it that way. With local media under siege, it's more important than ever for us to rally support behind funding our local journalism. You can help by participating in our "I Support" program, allowing us to keep offering readers access to our incisive coverage of local news, food and culture with no paywalls.
Make a one-time donation today for as little as $1.
Jim DeFede
Contact: Jim DeFede