The Definitive Ranking of the Miami Heat's Alternate Jerseys 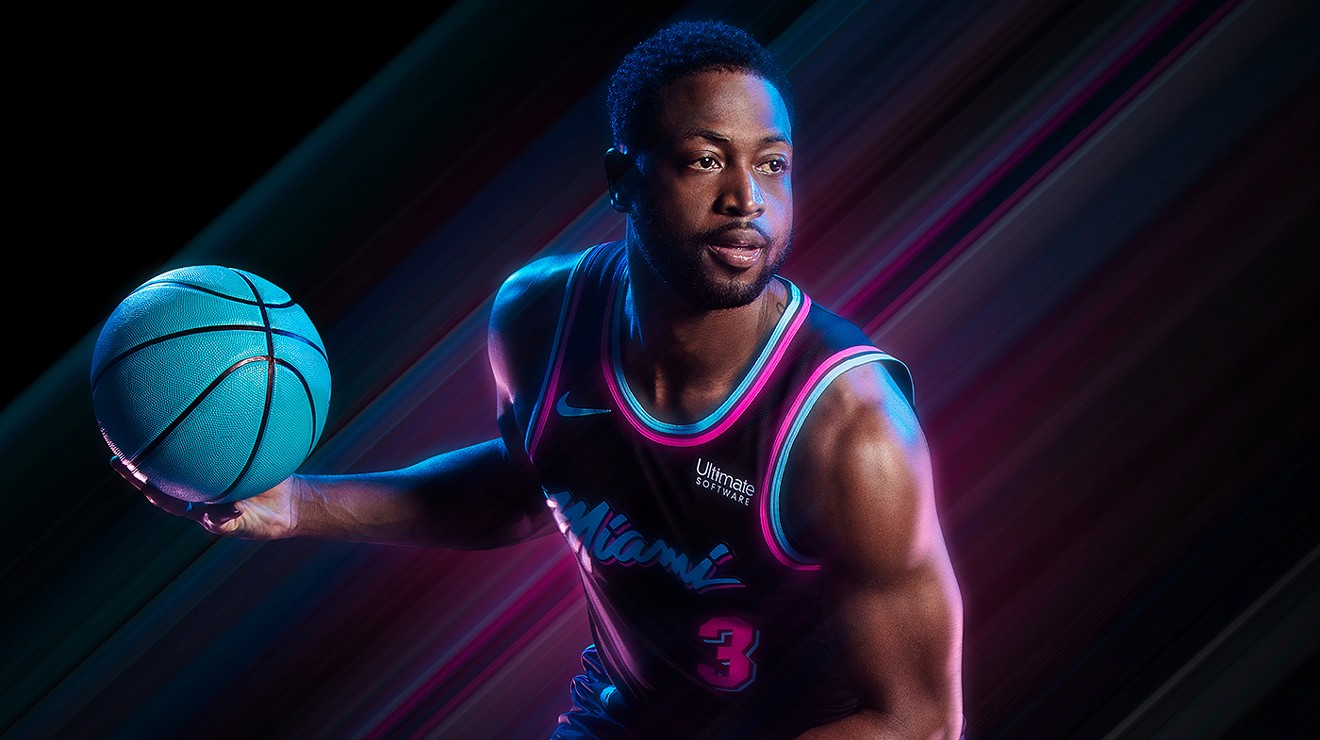 Just...yes. Courtesy of the Miami Heat / NBA.com
The Miami Heat is most famously known for two things: culture and championships. If we had to pick a third thing, alternate jerseys might be it.

For years, the Heat has widely been crowned the unanimous alternate-jersey champions of the basketball world. Then 2020 happened, and it all went to shit.

The current rainbow version of the Miami Heat's iconic Vice jersey is, well, not our favorite. It's actually a bit embarrassing, to be honest.


The Miami Heat's new jersey/court combo is something else ???? pic.twitter.com/c2vczcXFug

11. Vice Versa. Hey Siri, how can I completely ruin something that is perfect? The Vice Versa is what happens when greed and a shortened offseason get drunk and make a baby. The Heat will never top these hideous jerseys. The only thing worse than the shirts is the court the Heat plays on when wearing them. Unfortunately, these will live on for years in gyms and on beaches across South Florida.
10. The 2015 Legacy jerseys. You probably don't remember these alternate jerseys. In fact, you probably don't remember much about the 2015 season. It's probably better that way.

If mailing it in on a Friday afternoon at work was a jersey, this would be it. The people in the Heat's design lab must have spent countless seconds working on this one.
9. The 2013 sleeved logo jerseys. These alternate jerseys are best remembered for being worn on Christmas Day when LeBron James and Dwyane Wade put on an absolute highlight show. What people forget is that LeBron hated them with such a passion that when he played in a similar jersey in Cleveland the next season, he ripped the sleeves off midgame.

To be fair, these are the jerseys that look best on us. Us, as in you and me. Because they have sleeves, and we're gross nonathletic people with body hair. So they have that going for them.

8. The "nickname" jerseys. Back in 2014, the NBA tried to hop on a new trend that was basically just allowing players to put a nickname on the back of their jerseys instead of their name, as long as it wasn't too crazy. Predictably, it was a boring flop and was never spoken of again.

A good example of the failure of the nickname jersey was Dwyane Wade going with "D.Wade." Yeah, pretty shocking these didn't create more hype on LinkedIn.
7. Heat Strong. The Heat's 2015 alternate uniforms were a tribute to those who have served our country in the military. The idea behind them is great, but the look of these is just...all right. Something about them feels very G.I. Joe.

These jerseys get points for being unique and memorable. If you see someone wearing this jersey today, you know exactly which jersey it is and what it represents.


@mitchell_ness can we get some retro Miami heat Floridian jerseys ? pic.twitter.com/1TQ1QLidR9

6. The Floridian jerseys. A throwback to the Miami Floridians, a team that played from 1968 to 1972 in the American Basketball Association, these Heat throwbacks have made a few appearances over the years. They're like the Vice series, pre-Vice. Once these got a good reception, all hell broke loose for Heat alternate jerseys.

5. The tuxedo jerseys. The Heat's tuxedo alternates were slick. They're definitely an underrated look. The idea was ingenious, and the look felt classy, like the franchise. These are the sort of throwbacks we'd like to see the Heat bring back out of mothballs if it ever plays on New Year's Eve.
4. Sunset Vice. All right, let's get into it. There will be disagreement on how we rank the Heat's Vice line of alternate jerseys, but we're putting the pink versions at the bottom of the top. They're cool and all, but they're also pink. It's a tough look if you're not 6-foot-6 and 220 pounds of chiseled physique.
3. Vice City. The OG Vice jerseys blew everyone's mind when they were first dropped, but they've since been made to look quite average in comparison to what the team released in the following years. These are probably the ones that look best on the average Heat fan walking around South Beach.

If you're into bright colors and can pull it off, this jersey is for you. It's probably your favorite, and you likely have a pair of Air Force Ones to match.
1. Vice Nights. Just...yes. The way the colors pop with a black background, it's almost as if these have working neon implanted in them. You could not pull off a better representation of South Beach in a sports jersey if you tried. Impossible, I say.

Vice Nights is the version we'll always remember when the Heat inevitably brings these back in a few years. But to say they're the best is an opinion. It's a judgment call based on what you're into. Unless you're into the current rainbow ones — then you're just wrong.
KEEP MIAMI NEW TIMES FREE... Since we started Miami New Times, it has been defined as the free, independent voice of Miami, and we'd like to keep it that way. With local media under siege, it's more important than ever for us to rally support behind funding our local journalism. You can help by participating in our "I Support" program, allowing us to keep offering readers access to our incisive coverage of local news, food and culture with no paywalls.
Make a one-time donation today for as little as $1.