Miss Toto at sea Photo by Cliff Hawkins
Ever since she caught her first glimpse of the glimmering waves as a "wee baby" in Southern California, Miss Toto dreamed of working with water.

Though she’s known on the Miami nightlife circuit for her work as a drag performer flaunting six-inch heels and chiseled pectorals, Miss Toto stayed true to that first love: She studied, graduated, and conducted research at the University of Miami Rosenstiel School of Marine and Atmospheric Science (RSMAS), where she learned about another critically misunderstood creature: sharks.

"A lot of people are afraid of sharks, and there’s a huge stigma of sharks being aggressive, when in reality everything they do is instinctual," Miss Toto tells New Times. "I don't love that. Sharks are just trying to survive."

Just trying to survive is a sentiment that resonates with Miss Toto. As a budding scientist who happened to be Black and queer, Miss Toto didn't meet many marine biologists who shared her profile. In an event many years in the making, she has partnered with Field School, a hands-on educational center promoting inclusivity and field-research skills, to bring Miami the collaboration it never knew it needed: shark tagging with a dash of drag. Bringing Miss Toto’s two passions together, Drag 'N Tag benefits Pridelines, a local nonprofit supporting LGBTQ+ youth.

"It’s not that the dream isn’t there [among queer and Black youth]," Miss Toto explains. "It’s that they’re not seeing people doing that type of work that makes it seem realistic to them."

On the morning of Saturday, September 18, a motley crew of 20 scientists and donating participants board the Field School’s 55-foot research vessel, SS Garvin, for a day of shark tagging and drag. Perched upon the boat’s taffrail, Miss Toto resembles a mermaid, if mermaids wore a denim bikini and knee-high faux cowhide boots. She and her team are accustomed to turbulent waters, but the clear skies and smooth waves were a welcome sight as the boat surges south on the bay. 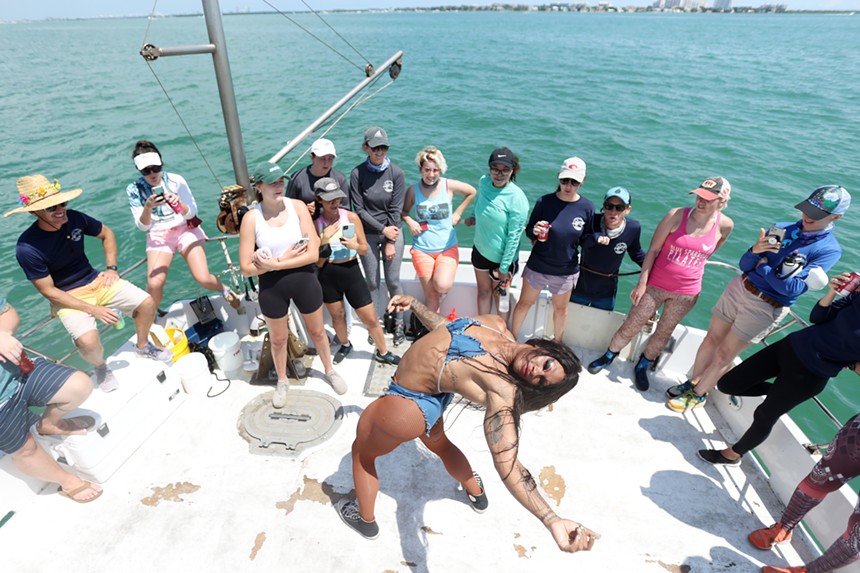 Miss Toto performs for the crowd.
Photo by Cliff Hawkins
Miss Toto grew up going to the beach in Los Angeles. As a kid, her idea of marine biology was vague and conjured images of dolphin training.

At the University of Maryland, she tamped down her marine-biologist dreams in favor of a more traditional career that promised higher pay and security: medicine. But during her last semester before graduating in 2014, she could no longer deny her passion. She applied and was admitted to graduate school at RSMAS, where her studies focused on sharks.

Miss Toto says she was one of the only Black students in her graduate program. While the school was supportive, she questions the accessibility of science programs for Black and queer people more systemically.

"Maybe it’s because UM is a private school and it’s expensive," she posits, "or maybe it’s because queer people, Black people, are discouraged from doing this type of science or science in general, which is sad."

Miss Toto prepares the fishing lines with bait.
Photo by Cliff Hawkins
At the first stop in Biscayne Bay, the crew begins “long-lining,” dropping a line with 22 baited hooks into the sea. After soaking for an hour, and with a sufficiently strong current, the bait attracts sharks.

But before setting the line, Miss Toto joins Jake Jerome, the Field School’s assistant director of program development, to explain how the sharks are tagged. For this, she employs a fabulous stuffed animal and model: “Great Vanna White” in a bejeweled tiara.

Jerome teaches participants how to measure sharks for length and girth, perform a biopsy, and insert a so-called spaghetti tag to identify the shark and track its growth if it is recaptured.

“Do they ever feel embarrassed about their girth size?” an eager participant giggles.

“We are sometimes embarrassed for them,” Jerome responds.

Once the sharks are caught, scientists restrain them and take a blood sample. The participants pitch in to help, and everyone works quickly to tag the cartilage area of the creature's first dorsal fin and record the scientific data. Sampling and tagging is completed within five minutes, minimizing the level of stress for the shark.

After a concerned participant asks if sharks experience pain, Miss Toto reminds them it’s just cartilage. Sharks have fewer nerves than humans do, with a smaller percentage of those devoted to pain receptors. The procedure is quick, minimally invasive, and doesn’t create any permanent damage since the tags are designed to fall off.

In the Field School's maritime classroom, each participant, even the most hesitant, is given a job and guided with the nurturing touch of a kindergarten teacher. The most menial of tasks, like layering used fishhooks in a bucket, is met with applause upon completion.
click to enlarge 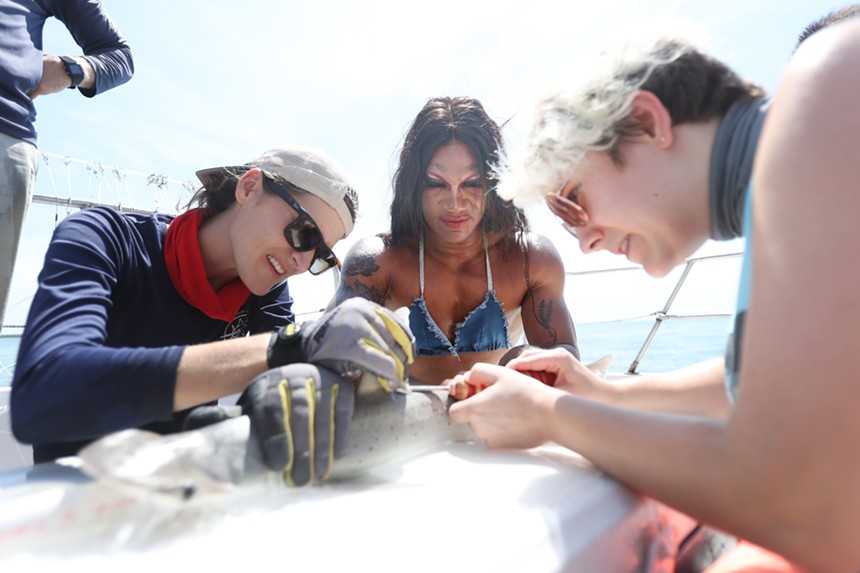 Miss Toto assists in shark research.
Photo by Cliff Hawkins
Miss Toto met Jerome and Field School cofounders Katherine Macdonald and Julia Wester at RSMAS in 2015. At the time, Miss Toto was coming into her own as a drag queen in the local scene. Their present collaboration is a testament to the bond they fostered during their studies.

"This is the first of many Drag 'N Tags," Jerome says. "We knew we wanted to do this event with Miss Toto — she’s a friend of ours from grad school, and she’s been very active in helping the LGBTQ+ community."

While many marine biologists enter the field with little hands-on research, Field School hopes to provide a safe space for emerging scientists to learn practical skills while mitigating gatekeeping barriers. Field School advocates for inclusivity, especially for gender diverse, LGBTQ+, and BIPOC involvement in the sciences.

"Some of it is that the institution of science is made up of people with the same problematic patterns, toxic culture, and people not seeing themselves represented," explains cofounder Julia Wester.

Karlisa Callwood, who is a board member of the school's nonprofit sector, the Field School Foundation, says reaching kids interested in marine biology while they're young is crucial.

"A lot of what we've been trying to do is create programs that are specifically targeting younger students, because we find that in order to get and keep a lot of the under-represented population interested in the field, we actually have to start when they're younger," Callwood says. "So a lot of people thought it was high school, but it's actually earlier than that, it's usually around the middle-school age when they start to solidify that STEM identity."
click to enlarge 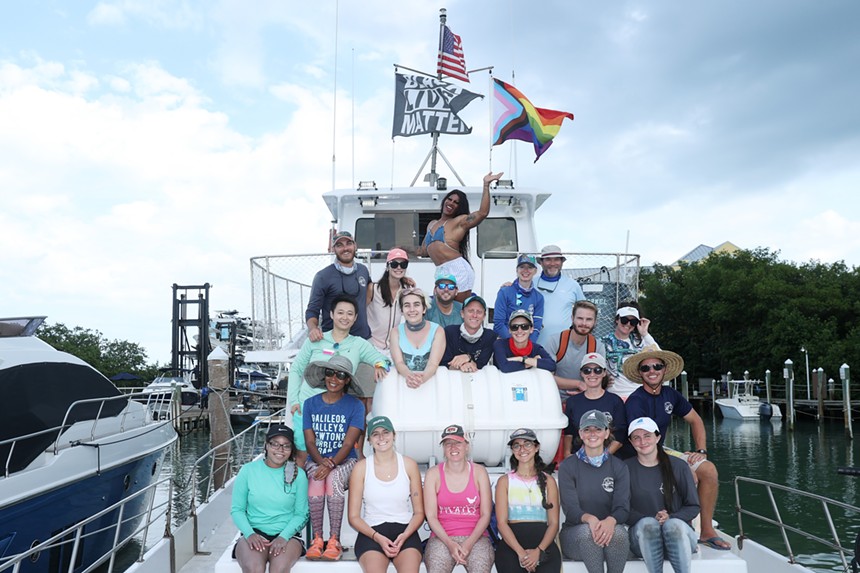 Framing Miss Toto’s elbow pit is a tattoo that replicates the jaw of the biggest great white shark ever recorded. She got the tattoo in 2016 while she was in the midst of shark research, which took her as far away as South Africa, where she studied Great Whites up close. She notes that her tattoo portrays a female shark jaw. Like Miss Toto, sharks are not beholden to gender norms. In shark physiology, Miss Toto explains, females dominate.

"As a feminist, I love thinking that people are always assuming sharks are male because they are more predatory or because they’re an apex predator," she says. "And it’s like, 'No, females are the ones who are the more dominant.'"

Even the large ones aren't the ruthless killers portrayed in films such as Jaws and on Discovery Channel’s annual Shark Week. Their portrayal in the media leads to reports of shark attacks being considered novel, and it may seem that sharks are hunting humans when in reality, it’s accidental. Miss Toto says they’re just instinctual creatures, "vibing" like fish.

"People are like, 'Oh there’s a shark in the water,' or 'Oh, I was attacked by a shark,' but it’s like, yeah, sharks live there," she says. "We are in their water. If a shark bites at you, the only way it’ll be fatal is if a person bleeds out. It’s not like a shark will come back and attack you. The intention is different."

Miss Toto has a soft spot for the powerful and misunderstood creatures. Though dolphins have been characterized as the sweethearts of the ocean, Miss Toto explains, they can be much scarier and, like orcas, are marine mammals capable of conscious thought and the desire to hunt for fun.

This distinction between the charismatic depiction of dolphins and the predominantly violent depiction of sharks has trickled into policy — or the lack of it. As unsustainable fisheries continue to kill sharks for their meat, and humans contribute to contaminating waterways, shark populations remain in decline. This wreaks havoc on the maritime food chain: As predators, sharks regulate the behavior of prey species, and prevent them from overgrazing vital habitats, helping to maintain the delicate balance of marine ecosystems. 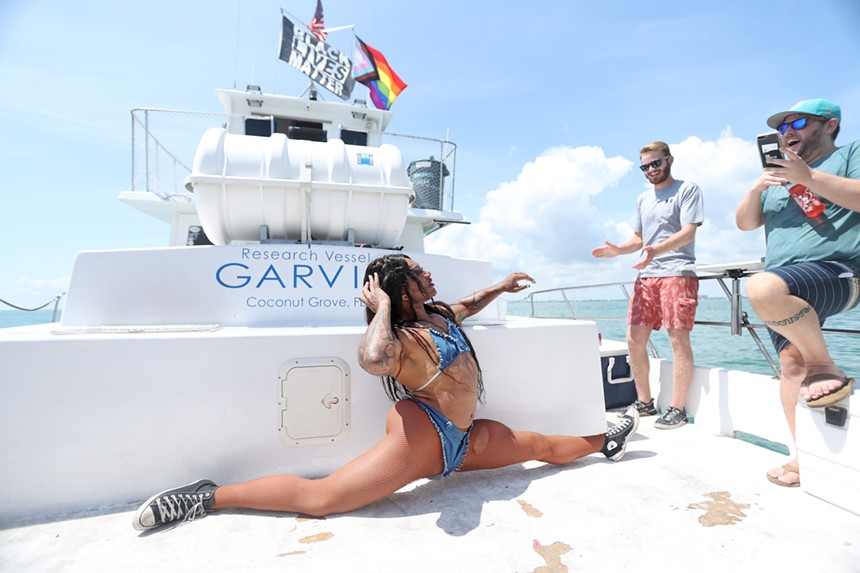 Miss Toto hits a split.
Photo by Cliff Hawkins
After pulling in the first of two female bonnethead sharks measuring just over three feet each, Miss Toto trades in her heels for more comfortable black Converse high tops and performs to Britney Spears’ “Toxic” among her fellow scientists and shark lovers.

"To see the type of work Field School is doing outside of just the research is cool, there are social things that we can do to make marine science more accessible for Black people, queer people," she says. "We need to support people in these groups, like Pridelines. Get people out on the boat and get them excited about marine science. I held onto the dream but it wasn't easy."

After a brief drag-wrestling gig in Germany, Miss Toto will return to Chicago, where she teaches aquaponics and other STEM classes to young people at PLANT Chicago, a collaborative community of food businesses that promote circular economies and waste reduction.

Throughout Saturday's six-hour voyage, the cheers continue as Miss Toto jolts into splits under the bright afternoon sun and a pod of dolphins leaps and pirouettes out of the water, relentlessly chasing the boat's wake.

By the end of the journey, shark dreams were fulfilled and more than $5,500 was raised to support Pridelines (donations are still being accepted), in the name of science and queer pride and joy.
KEEP MIAMI NEW TIMES FREE... Since we started Miami New Times, it has been defined as the free, independent voice of Miami, and we'd like to keep it that way. With local media under siege, it's more important than ever for us to rally support behind funding our local journalism. You can help by participating in our "I Support" program, allowing us to keep offering readers access to our incisive coverage of local news, food and culture with no paywalls.
Make a one-time donation today for as little as $1.