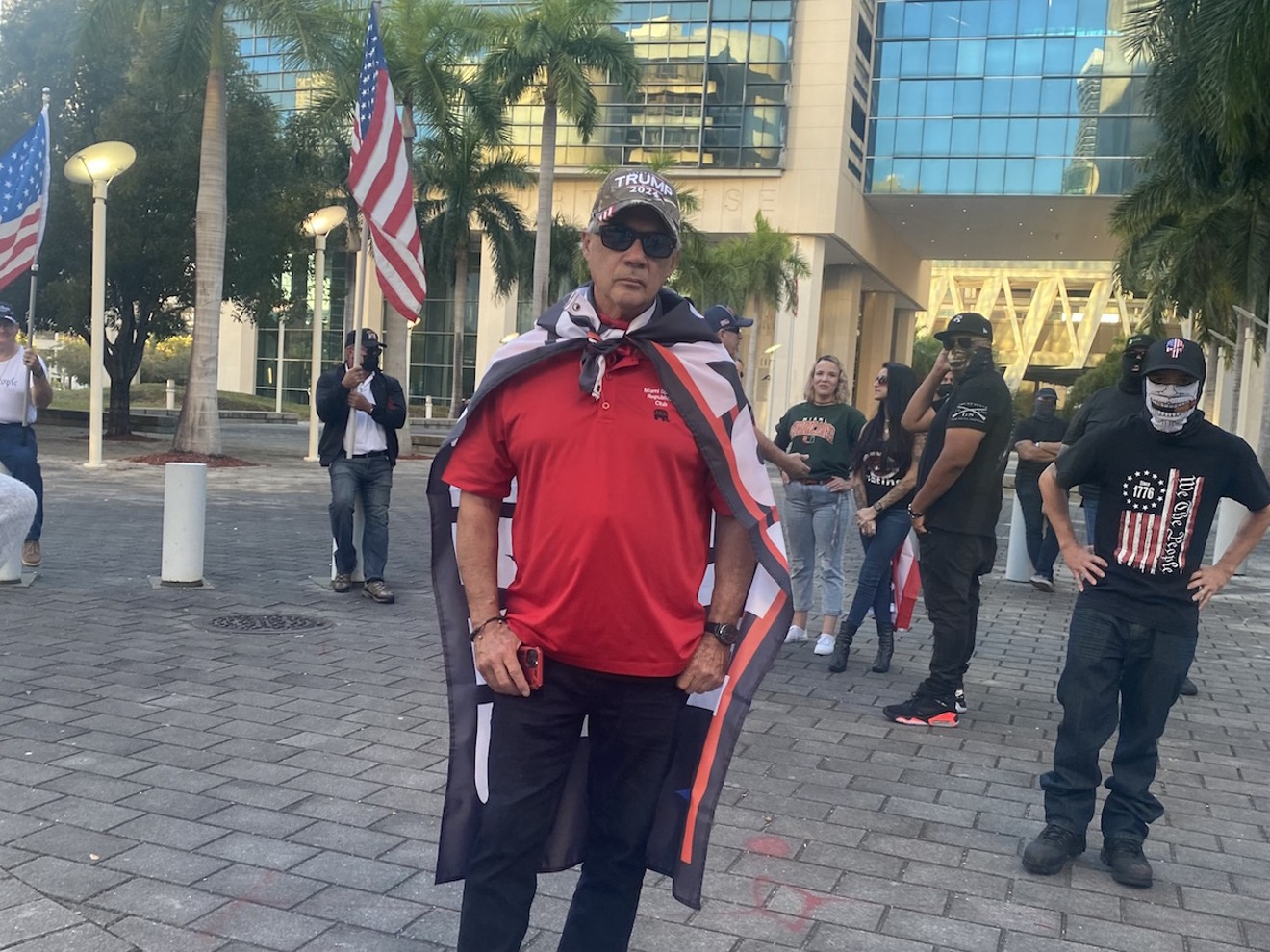 Roughly 30 self-styled freedom fighters gathered on January 6, 2022, at the Federal Detention Center in downtown Miami. See more photos from the Jan. 6 gathering here. Photo by Jess Swanson
The Federal Detention Center in downtown Miami is a 17-story, concrete building with scores of little slits corresponding to inmates' cells. In one of those cells resides Paul Hodgkins, the first person sentenced for participating in the January 6, 2021, insurrection at the United States Capitol. There are approximately 1,500 inmates housed here — a disproportionate number of whom are Black and Hispanic — but Hodgkins, a white thirtysomething Tampa man with long black hair, is the reason roughly 30 people have gathered here at 3:30 p.m. on Thursday, January 6, 2022: to protest the perceived injustice of his eight-month incarceration on the one-year anniversary of the day he and a mob of Donald Trump supporters attempted to stop the certification of votes for President-Elect Joe Biden.

"We're going to say a prayer for those sitting in jail — they're not alone," event organizer and former presidential candidate Souraya Faas tells a cohort of reporters, photographers, and videographers that nearly outnumbers the insurrection sympathizers. At one point, her voice breaks and her eyes well with tears. "They did nothing wrong other than exercise their freedoms."

There's certainly an irony to a group of people wary of the media calling a "press conference." The portable, pressed-wood podium is the de facto front line between the journalists and the MAGA supporters, Proud Boys, and Miami Springs Republican Club members who requested our presence. Neither faction attempts to cross this invisible line.

"I feel bad for journalists who can't do their jobs the way they want because corporate-backed liberal media is telling you what to do, controlling the narrative," Faas says. "When a lie is repeated so many times, they believe it to be true."

For the most part, the insurrection sympathizers do not want to be interviewed and stand in an intimidating silence, wearing sunglasses and gaiters that cover half their face. They do want to wave the American flag. They disagree that January 6 was "violent," or that it was an "insurrection" at all, and thus take offense at being called "insurrection sympathizers." Their shirts carry messages such as "We the People," "That Which Doesn't Kill Me Better Start Running," and "Stop Hating." Cars passing on North Miami Avenue honk and shout — though it's unclear if the noises are in solidarity or opposition.

Eulalia Jimenez, a stylish brunette wearing the black tank top that says "Stop Hating," agrees to speak to a New Times reporter, even though a friend warns that New Times "will twist her words and blame autocorrect."

"We're freedom fighters fighting in solidarity for the future of our country that is clearly under attack," Jimenez declares. "I hope people continue to unify and stand for the freedoms this country was founded on, for our children."

Jimenez explains that she attended Donald Trump's January 6 rally in Washington, D.C., but never entered the Capitol building, insisting that the event was "peaceful."  She reports that there were "people who you could tell were not MAGA supporters" and that "they didn't belong."

"It was evident there was a setup taking place," she says. "From the outside, I could see people were going in and coming out but all were escorted by D.C. police — or people dressed like D.C. police."

An American flag dangles from the back pocket of Jimenez's jeans. It belonged to a woman named Wanda Albritton, who died last September from COVID-19. She was a member of the Miami Springs Republican Club and attended Donald Trump's January 6 rally with her husband, Steve Albritton, who gave the flag to Jimenez this afternoon to carry on his wife's legacy in political activism.

"They keep calling it an insurrection, but if we wanted to take over, we could've, by sheer numbers," Albritton asserts. "It's ridiculous. We were invited. They held the doors [to the Capitol] open for them. I saw them."
click to enlarge

An attendee waves an American flag. See more photos from the Jan. 6 gathering here.
Photo by Jess Swanson
Souraya Faas leads a prayer vigil, then recites her own statement: "Everyone thinks we're here to celebrate but we're not here to celebrate, but commemorate something unfortunate that didn't need to happen if politicians had been listening to people rather than their own self-interests.... What happened on January 6 can't happen again."

A man recites the Pledge of Allegiance as some attendees salute one or another of the six American flags in the immediate vicinity. Albritton sings "The Star-Spangled Banner," and then it's Gabriel Garcia's turn.

Garcia, the onetime leader of the Vice City Proud Boys, videoed himself entering the Capitol with other rioters, exclaiming, "Nancy [Pelosi], come out and play!" and calling U.S. Capitol Police officers who tried to stop the rioters "fucking traitors." He is free on bail pending the resolution of several misdemeanor and felony charges. He had requested that his GPS ankle monitor be removed because he found the beeping noises "embarrassing," but on this afternoon its silhouette is evident through his jeans.

Garcia spoke of a "two-tiered justice system," comparing the January 6 invasion of the U.S. Capitol to the Geroge Floyd protests in the summer of 2020. "[The former] led to $30 million in damages, the other $2 billion — but you don't see too many people from [the Floyd demonstrations] being held accountable," he says. "They've compared [January 6] to the deadly attacks of Pearl Harbor and 9/11, which is one of the reasons I joined the army in the first place."

He adds, "I love my country and a lot of Americans are tired of being silent, cancel culture, and being called supremacists and racists. There is nothing racist about a man named Gabriel Garcia — let's make it clear that being against the Left does not make you racist."

After the press conference is over and the journalists pack up, the group dawdles, debating where to eat. Versailles is suggested, then voted down. As the deliberation continues, a young woman, noticing Jimenez's "Stop Hating" shirt, assures her that "when you do the right thing, you're going to be hated."
KEEP MIAMI NEW TIMES FREE... Since we started Miami New Times, it has been defined as the free, independent voice of Miami, and we'd like to keep it that way. With local media under siege, it's more important than ever for us to rally support behind funding our local journalism. You can help by participating in our "I Support" program, allowing us to keep offering readers access to our incisive coverage of local news, food and culture with no paywalls.
Make a one-time donation today for as little as $1.