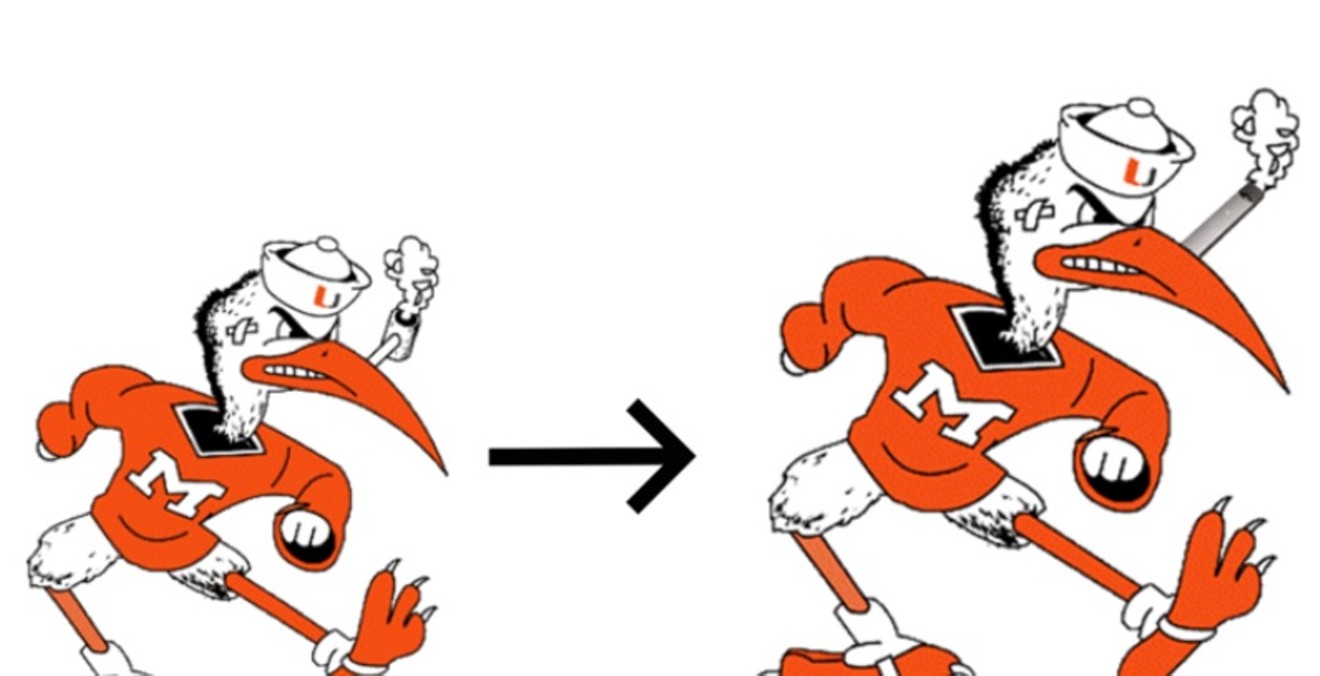 Alec Castillo
Tobacco is gross. Nobody likes tobacco anymore. It's not cool. Joe Camel can go fall off a bridge. The only people who smoke tobacco pipes in 2018 are steampunk weirdos, creeps who like Hugh Hefner too much, oil barons, and Sebastian the Ibis, the mascot for the University of Miami Hurricanes.

Sure, maybe Sebastian used to be cool in whatever weird, bygone, half-remembered era he was birthed into, back when you couldn't get into college unless you looked like Armie Hammer and woke up at 4 a.m. every day to go rowing while wearing one of those bulky, one-piece bathing costumes. But that's not 2018.

Today, the vape. They chuck up massive clouds while streaming Twitch and murdering their friends on Fortnite. And they absolutely do not mess with tobacco pipes.

As such, a pair of University of Miami students — Alec Castillo and Kevin Fernandez — have created an extremely vital petition that begs university president Julio Frenk to "let our school mascot, Sebastian the Ibis, hit the JUUL" like a true 21st-century college kid.

"As a member of the student body of the University of Miami, it's important that we have a mascot that represents our student body," Castillo tells New Times. "That’s why I want to see Sebastian JUUL. It's important for us to be seen as we are."

The pair of students created the petition in September, and as of last night, 137 people had signed it. But the local film company Borscht gave the petition a signal-boost on social media, so that number may well rise.

, of course, far and away the most popular single brand of vape on the market. JUUL "pods" come in an assortment of eight flavors, including mango and creme brulee.  look like flash drives, are rechargeable, and, most important, let users smoke nicotine "salts" instead of pure tobacco. While it's certainly healthier than smoking cigarettes, JUULs are 100 percent still bad for you, which is why teens love them so much. Parents are bugging out and lawmakers are starting to crack down on JUUL usage.

As a student of @univmiami I want a mascot that represents the diverse and ever-changing student body. Please sign the petition for your voice to be heard and to make a change. #LetHimJUUL https://t.co/mqqD8K6FYQ

The benefits to Castillo and Fernandez's plan are manifold: UM athletes won't feel pressured to smoke huge tobacco pipes in public and ruin their lungs. The university could appear health-conscious without seeming like total buzzkills. Sebastian could do a YouTube show with Gritty and talk about anarcho-communism. (Gritty seems like more of a weed-dab dude, though.) Sebastian also is a bird native to the critically endangered Everglades and needs to preserve his fragile species and remain alive as long as he can.

New Times asked Castillo, a junior media-management major who recently completed an internship with the Adult Swim TV network, how he feels about various tobacco products.

"That's old-people stuff," he responded. "The kids are into JUULing, smoking out of USB sticks, that type of stuff. JUULing is the future, man. He could be smoking weed, anything really."

But what if the mascot simply didn't puff anything at all?

"That’d be so lame," he said. "I would be so ashamed to go to a school with a mascot that's just a bird. But a smoking bird? That’s dope."
KEEP MIAMI NEW TIMES FREE... Since we started Miami New Times, it has been defined as the free, independent voice of Miami, and we'd like to keep it that way. With local media under siege, it's more important than ever for us to rally support behind funding our local journalism. You can help by participating in our "I Support" program, allowing us to keep offering readers access to our incisive coverage of local news, food and culture with no paywalls.
Make a one-time donation today for as little as $1.