Woman Who Likes Trump's Smile: "I Wish He Would Smile More and Talk Less" 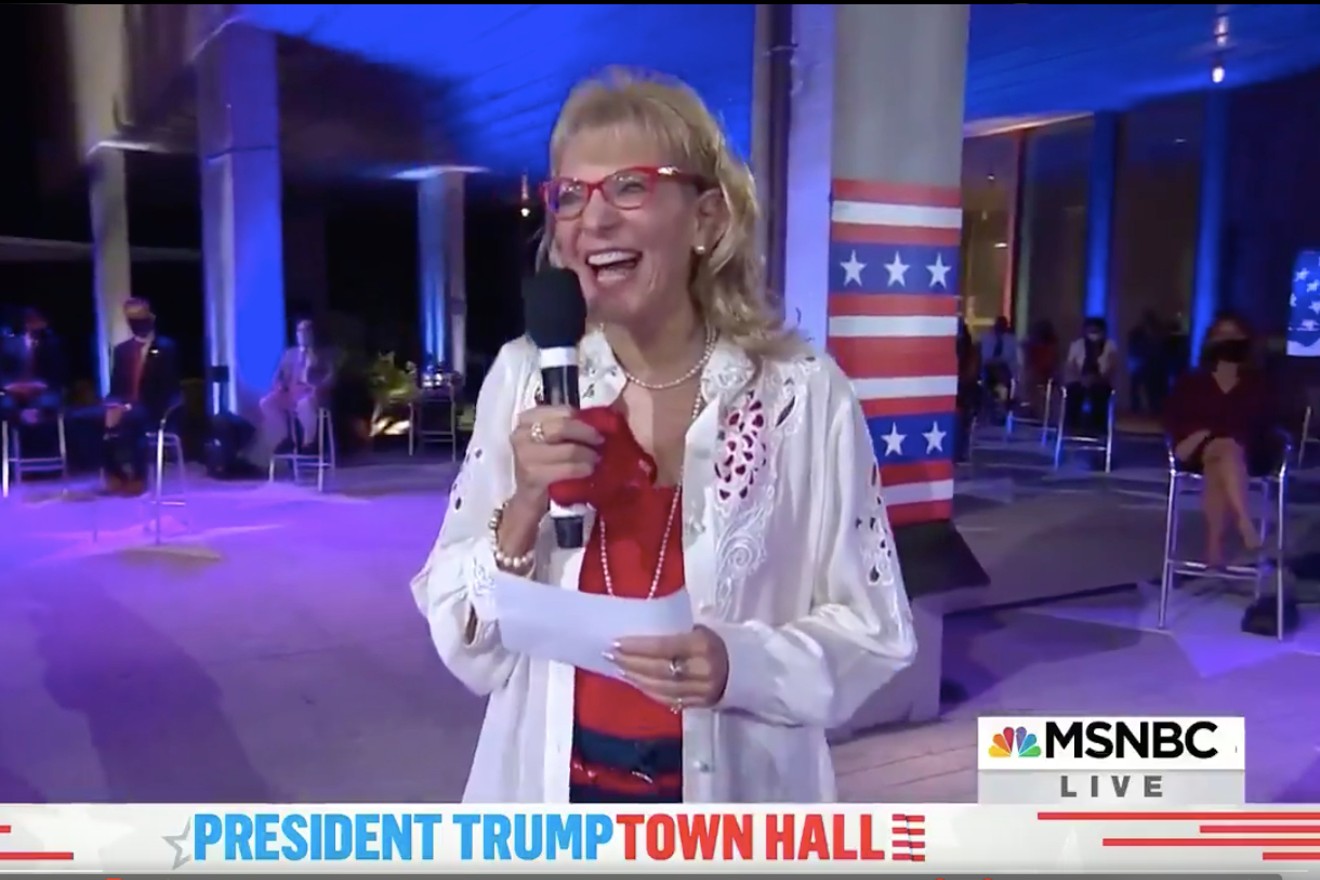 Paulette Dale Screenshot via NBC
Update, October 21: After President Donald Trump mentioned her at his recent rally in Nevada, Paulette Dale tells New Times she wants Trump to know that her compliments were sincere.

"I found him to look younger and more attractive when his genuine smile reaches the corners of his eyes. At that moment, my sincere reaction was that he has a great smile. So I said so!" she writes in an email. "While not a supporter of his for reelection, I find it tragic that we are expected to be unkind to people whose values we do not share. The ability to say something positive to the President (and sincerely mean it) and simultaneously disagree with his political and philosophical views should not be mutually exclusive."


If you'd made a bingo card in anticipation of tonight's Miami town hall with President Donald Trump, a few squares would be obvious. Trump says he's feeling better than ever after his COVID-19 diagnosis? Check. A dig at antifa? Sure. A woman telling the president, "You're so handsome when you smile"?

No one could have predicted that.

But that's exactly what happened at the tail end of tonight's event at the Perez Art Museum Miami, where Trump answered questions from South Florida voters. Paulette Dale, a registered Republican who's leaning toward voting for Trump's challenger Joe Biden, took the microphone to ask the president a question about Deferred Action for Childhood Arrivals (DACA), the policy that allows young undocumented immigrants to remain in the U.S. But first, she offered Trump a compliment that left him beaming.

"I have to say, you have a great smile," Dale told the president. "You're so handsome when you smile."

Her remarks lit up the internet — within moments, a fake Paulette Dale account emerged on Twitter, and her observation became an instant meme. Some television viewers noted Dale's likeness to actress Allison Janney, betting that Saturday Night Live will re-enact the moment this weekend.

But despite her complimentary words, Dale wants it known that she does not actually like Trump.

New Times caught up with Dale on her way home from the town hall — and she made it clear that she is no fan of 45.

"I wish he would smile more and talk less," she quipped.

Asked to elaborate, Dale said the president "steps in it every time he opens his mouth."

"I think the man has a nice smile. However, I'm not a fan," she further clarified.


I would read a story about the person identified as Paulette Dale, who is apparently leaning Biden but is mesmerized by @realDonaldTrump's smile. https://t.co/EV1TjOrboy

Me flirting with the bartender after two drinks pic.twitter.com/HVywJ8eGoS

Mr waiter, I’ll have a double pork stuffed lobster with a bowl of gravy.


A former resident of Miami, Dale now lives in Palm Beach County in the town of Highland Beach. After 35 years as a professor at Miami Dade College, she retired about a decade ago.

Dale said her big television appearance was fairly last-minute. For years, she has been a part of a focus group called Ask Miami, and on Wednesday she responded to a questionnaire for voters interested in posing a question to Trump or Biden. She said she was contacted hours later by someone at NBC who said they liked a question she submitted for Trump about DACA.

At the town hall, Dale described having grandparents from Russia and Poland.

"As the daughter of immigrants to the United States who fled Eastern Europe due to religious persecution, the United States' immigration policies are very personal for me," she said. "Surveys show that most Americans and the majority of Republicans support the Dreamers program. So my question for you, Mr. President, is: If you are elected to a second term, do you expect to pursue your previous efforts to cut the DACA program?"

Trump gave a rambling answer about the border wall and Mexico's COVID-19 caseload.

"We are working very hard on the DACA program and you will be, I think, very happy over the course of the next year, because I feel the same way that you do about it," the president assured Dale.

Dale said she was pleased with Trump's response, but it wouldn't be enough to sway her vote. She plans to vote for Biden during Florida's early-voting period, which begins on Monday.

Dale said she asked about immigration based partly on her experience at Miami Dade College. She said many of her students were Dreamers, and she worries about their future under Trump.

"I know these kids are the cream of the crop and are so worthy, and I was very concerned that the rug would be pulled out from under them and they would be sent back," she said.

Dale said she'd actually submitted two questions for Trump. The one that didn't get chosen was about climate change — a topic that wasn't discussed at the town hall, despite Miami's reputation as one of the cities most vulnerable to sea-level rise.

But she really meant it when she complimented the president's grin.

"I believe the man has a very nice smile; there was no reason not to comment on it," she said. "Smiles are important to me. I like nice teeth."
KEEP MIAMI NEW TIMES FREE... Since we started Miami New Times, it has been defined as the free, independent voice of Miami, and we'd like to keep it that way. With local media under siege, it's more important than ever for us to rally support behind funding our local journalism. You can help by participating in our "I Support" program, allowing us to keep offering readers access to our incisive coverage of local news, food and culture with no paywalls.
Make a one-time donation today for as little as $1.