Joe Carollo: "So What?" If Redistricting Puts His Coconut Grove Home in District 3 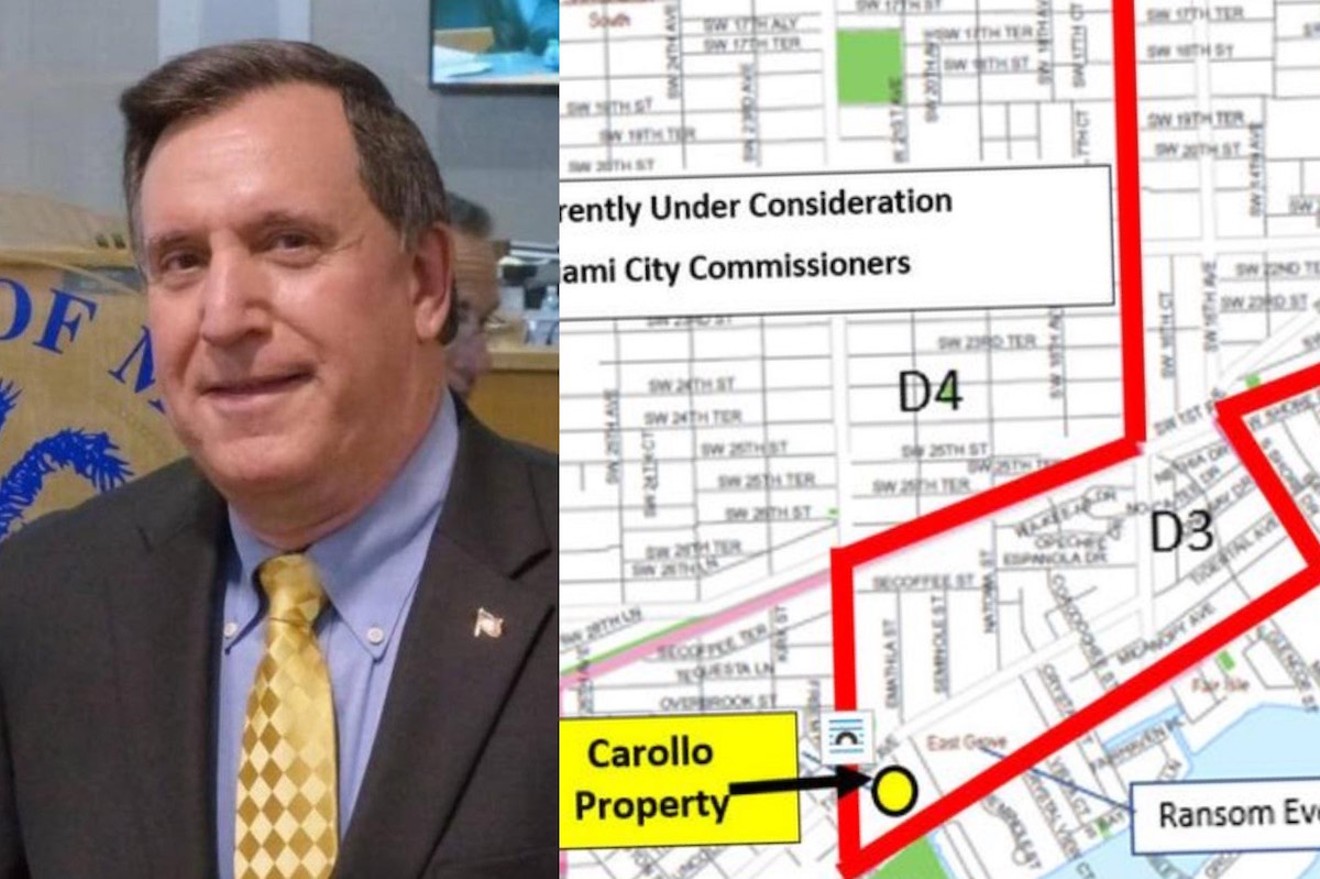 A new redistricting proposal moves a swath of North Grove from District 2 into District 3, represented by Commissioner Joe Carollo. via City of Miami, Debbie Dolson
As Coconut Grove residents fight what has been called a "blatantly racist" redistricting proposal that would split the close-knit neighborhood into three Miami City Commission districts, there's one curiously-shaped carveout that has some residents raising their eyebrows: The chunk on the Grove's northern end that would be subsumed into District 3, which is represented by Miami Commissioner Joe Carollo, just so happens to include a $2 million home on Morris Lane owned by none other than...Joe Carollo.

"I think it's completely inappropriate," says Ana Gonzalez, a resident of Shenandoah in District 3. "He just wants it so he can live there. It's a really big coincidence."

Why, you ask, would Carollo own a $2 million house in Coconut Grove that he doesn't live in?

Good question. In 2001, Carollo purchased the six-bedroom, five-bathroom property on a shady cul-de-sac in northeast Coconut Grove. The house, along with all of Coconut Grove, currently forms part of the skinny Miami Commission District 2, which meanders up the coast and includes the high-density (and more progressive) neighborhoods of Brickell, downtown Miami, and Edgewater.

But in the November 2017 election, Carollo, who arrived in Miami on a flight from Cuba in 1961, ran for commissioner in District 3 — a mostly conservative and Cuban district that includes Little Havana and West Brickell. In order to comply with residency requirements, he rented an apartment in West Brickell in 2016, and has lived in District 3 ever since.

Now the district maps are being redrawn in response to the 2020 U.S. Census results, which revealed uneven growth in District 2. In order to make each of the city's five commission districts represents an equitable population, the city hired attorney and lobbyist Miguel De Grandy to redraw the district maps and siphon roughly 28,000 voters out of District 2.

The process is meant to keep communities intact and protect minority voting blocs, but Coconut Grove residents say the proposal that was approved at a special city commission meeting last Friday will not only disenfranchise Black voters in the West Grove, but doesn't make a whole lot of sense — especially the redrawn portion that cozily wraps around Carollo's house and would split Ransom Everglades School's middle and high school into two separate districts.
click to enlarge A proposed Miami City Commission redistricting map moves Ransom Everglades middle school and Joe Carollo's house out into District 3.
Courtesy of Debbie Dolson
Ahead of the March 11 special commission meeting, where the redistricting map is expected to get final approval, individual commissioners held meetings in their districts to answer questions and address concerns about the proposed changes. But by the time Carollo arrived 40 minutes late to his own town hall at the Jose Marti Park recreation center on Wednesday evening, three residents had given up and already left.

Carollo explained at the meeting that the appendage that includes his Morris Lane home was added to District 3 because Commissioner Ken Russell, who represents District 2, requested to keep Bay Heights in his district.

Russell tells New Times that he did not intend to trade Bay Heights for North Grove but wants to keep the entirety of Coconut Grove together in one commission district. Russell has proposed an alternative district map, which would keep intact the Grove's natural boundaries at U.S. 1 and Miami Avenue, and move portions of higher-density areas, including the Golden Pines area west of U.S. 1 and north of SW 27th Avenue, to other districts.

Carollo spent a considerable portion of the meeting sparring with some constituents, including Shenandoah resident Ana Gonzalez, whom he claimed he did not represent because she didn't vote for him.

"You didn't vote for me, lady. There's no way you voted for me. You're not my voter," Carollo told her amid a heated exchange after Gonzalez suggested U.S. 1 as a "hard boundary" and asked why parts of West Brickell couldn't move to District 3 instead.

At the meeting, a handful of residents from Districts 2 and 3 asked whether the map could be redrawn to preserve all neighborhoods and keep them within the same districts — not just Coconut Grove but Flagami and Shenandoah, which were split into different districts in previous redistricting processes.

When communities are split into separate districts, residents must interact with different commissioners to advocate for neighborhood projects. This is further complicated by Florida's Sunshine Law, which prohibits elected members of the same official body from gathering at the same time outside of scheduled public meetings.

Miguel De Grandy, the city's redistricting consultant, said he could not redraw the map to keep existing neighborhoods together because he was instructed to keep existing districts largely the same to preserve their demographic identity.

Carollo hasn't lived in the Grove since September 16, 2016, when he moved to West Brickell to qualify to run for District 3 commissioner. The Miami City Charter requires a candidate to live within the district they will represent for a full year prior to registering for the race. When Carollo ran in District 3 in 2017, the one-time Miami mayor said he'd moved out of his Grove home and lived in the West Brickell apartment for 366 days — squeaking through the September 17, 2017, deadline by a mere 24 hours.

His opponent in District 3, Alfonso "Alfie" Leon, begged to differ.

On November 20, 2017, Leon, whom Carollo had defeated in a runoff, sued his foe in Miami-Dade circuit court, alleging that Carollo had not in fact lived in District 3 for a full year and a day but was still living in the Morris Lane home in Coconut Grove months after claiming to have moved. (A copy of the complaint is embedded at the bottom of this story.)

"By the time the election was happening, Carollo was living in that [West Brickell] apartment. But based on everything we found, he didn't start living at that apartment until about April 2017, and he was supposed to have been living there since September of 2016," Leon's attorney, Juan Carlos Planas, tells New Times.

In court, Planas presented cellphone records showing that Carollo's phone was pinged near his Coconut Grove house and that the electricity bill remained high there until around April 2017, when the cellphone records started pinging more frequently in West Brickell and the utility bills went up at that residence.

A judge ruled in Carollo's favor and said the alleged charter violation wasn't sufficient to challenge Carollo's eligibility after he'd already been elected.

"If we would've been sued before the election, we would've proven he didn't make the year [deadline] and taken him off the ballot," Planas contends to this day.

Though Carollo still owns the property on Morris Lane, he has moved from the West Brickell apartment and is now renting a home in Little Havana. Because he no longer resides on the Morris Lane property, he cannot claim a state homestead exemption on it. In a recent post, local blogger Elaine de Valle of Political Cortadito pointed out that the current round of redistricting might prove beneficial to Carollo, given that a federal appellate court ruled last month that William "Bill" Fuller and Martin A. Pinilla could sue the commissioner in his personal capacity for $10 million for alleged harassment of their businesses in after they supported Leon in the 2017 commission race.

If Carollo were to move back into his Coconut Grove home and apply for a homestead exemption, not only would his property taxes there go way down, but the court wouldn't be able to seize the property as an asset if he lost the case to Fuller and Pinilla.

Fuller tells New Times he's aware of the redistricting map and that he and his legal team are reviewing it.

"What I can tell you is that we have been provided a lot of information from people in [Carollo's] inner circle and we’re examining all available information," says Fuller, who declined to comment further.