Ball & Chain's owner says this photo shows Joe Carollo bothering club employees at midnight in March 2018. Courtesy of Miami-Dade County Commission on Ethics & Public Trust
Miami's city charter is crystal clear: It's flat-out illegal for elected officials to give direct orders to city staffers such as fire inspectors or code enforcement employees. If the mayor or a city commissioner breaks that edict, they can face a $500 fine, 60 days in jail, and immediate removal from office.

Miami Commissioner Joe Carollo did exactly that, at least according to two city employees who told the Miami-Dade County Commission on Ethics & Public Trust that the commissioner gave them direct instructions to look for code violations in specific areas of town.

Those employees' allegations came during an investigation launched this past March when Bill Fuller, co-owner of the nightclub Ball & Chain, complained that Carollo was illegally using code enforcement investigators to target his businesses, all because Fuller helped Carollo's election opponent.

Neither Carollo nor his  Ben Kuehne, responded to messages from New Times about those employees' claims. Fuller's lawyer, Alex Orlofsky, declined to comment. If Carollo indeed violated the charter by directly bossing around city employees, it would be up to Miami-Dade State Attorney Katherine Fernandez Rundle's office to take action; her spokesperson also didn't respond to queries for this story.

Either way, Carollo has some serious questions to answer about whether he illegally pressured city employees to attack his enemies. The testimony to the ethics board was included in a 38-page report released last week after Fuller dropped his complaint; his attorney says Fuller stands by the claims but has decided to pursue a criminal or civil case instead.

The first city employee, fire inspector Carlos Diaz, told the ethics board that on February 18, Stephen Miró, a former aide in Carollo's office who separately alleged Carollo pressured him to lie to ethics investigators, reported that a food truck operating on one of Fuller's lots was selling "spoiled food" and not operating with proper permits. Diaz then said that Miró handed him a cell phone and that Carollo was on the other end of the line.

Diaz said Carollo told him that he was concerned for the citizens of Little Havana and that he had also heard the truck was selling spoiled food. The commissioner then allegedly asked fire inspectors to "follow up" with the owners of the food truck.

Diaz's tale was echoed by another city employee, code compliance inspector Dennis Uriarte, who told ethics investigators he met with Carollo twice even though Uriarte technically patrols Coconut Grove in Commissioner Ken Russell's district. In one instance, Uriarte said Carollo told him that a construction site at 1600 SW Eighth St. was operating without permits. (Uriarte said once he looked into the site, he learned Carollo was incorrect.)

In the second, more egregious case, Uriarte said Carollo personally took him on a "ride-along" around Little Havana, where the commissioner pointed out various businesses and sites and asked Uriarte to "investigate" them. Uriarte told the ethics panel he responded to Carollo that because he did not cover Little Havana, he would pass the complaint on to his supervisor, Daniel Sierra.

Uriarte added that he'd never received direct instruction from a city commissioner before and that "in [his] two-and-a-half years, that was the first time, [and] it's been the only time" and that directions from commissioners are "not usual."

Perhaps that's because those kinds of instructions are violations of the city charter.

Interestingly, even former Assistant City Manager Albert Parjus — considered a Carollo ally — said as much to the ethics . Parjus told investigators that, in general, the "correct" way for a commissioner to file complaints is through the city manager's office.

"The wrong way is a commissioner calling the Director of Code Enforcement," Parjus told the ethics board without listing the actions of anyone in particular. Parjus said that, like Carollo, Commissioners Willy Gort and Keon Hardemon also often "patrol" parts of their districts to look for problems. But he also said those commissioners take their complaints directly to the city manager's office, per city policy.

In addition to allegedly directing inspectors, Carollo's office repeatedly bypassed the city manager to complain directly to the head of Miami's code enforcement office, witnesses told ethics investigators. Code enforcement director James Bernat said that since he was appointed to his post March 5, he had received multiple "calls from Carollo's office" about numerous properties, including Ball & Chain.

Bernat suggested he has received calls from other commissioners (which would also potentially violate the charter) but added Carollo is far and away the most regular caller. In fact, Bernat said that in "March or early April," Carollo conducted a "park and walk" in Little Havana with "numerous city employees," including code inspectors and at least one police officer. Bernat said that many members of Carollo's entourage asked him probing questions and that Carollo "arranged for him" to meet a woman who lived near Ball & Chain who supposedly had complaints about noise from the club.

As local blogger Al Crespo first reported, the citywide "bulletin" referenced the exact city charter section, 4(d), which warns commissioners they can be removed from office and even jailed for interfering with the city manager's employees. 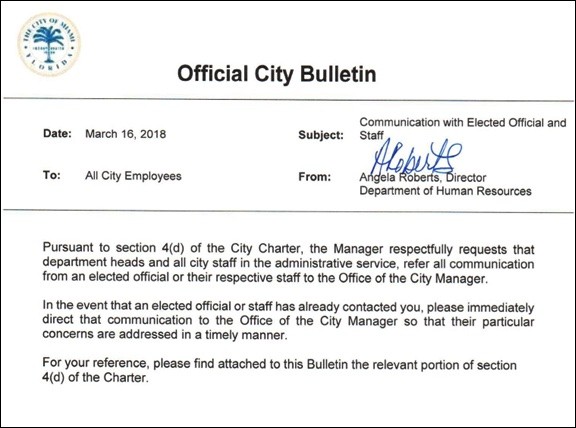 City of Miami
One employee at city hall, who did not want to be named because they weren't authorized to speak to the media, stated it was common knowledge at city hall that when Gonzalez sent this bulletin, Carollo had been directing code enforcement officers in Little Havana. The employee said many assumed Gonzalez's bulletin was a veiled reference to Carollo's alleged actions.

It's also true, though, that Rundle's office has rarely — if ever — charged sitting politicians for violating this section of the charter, which is meant to prevent city employees from feeling pressured to do politicians' bidding. 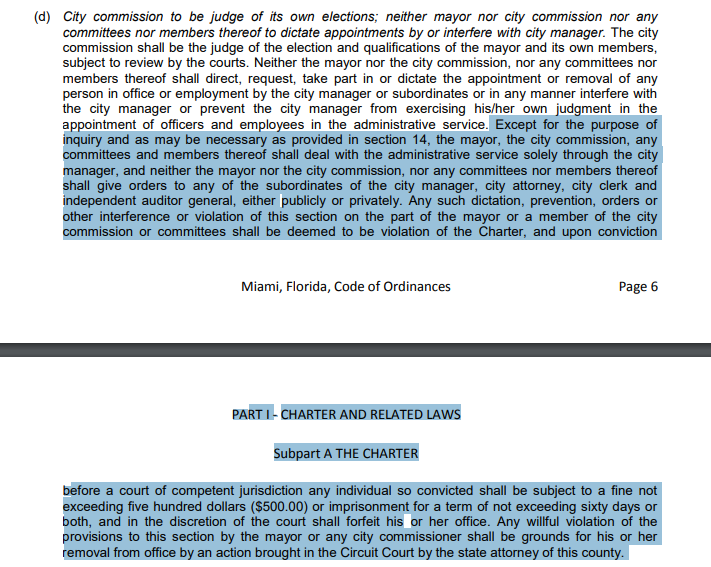 City of Miami Charter
Carollo, a former Miami mayor, was long ago labeled "Crazy Joe" by the press. In his decades in politics, he's become well known for a history of outlandish antics and a tendency to bizarrely accuse his enemies of communist ties — as well as racism allegations, grand jury investigations, and a 2001 arrest for domestic violence.

This isn't the first time Carollo has been accused of sending code enforcement after his enemies. As New Times detailed last week, he used a nearly identical scheme in 1996 to attack Rodney Barreto, a local fundraiser and lobbyist. Barreto was the godson of then-Miami Mayor Stephen P. Clark, who frequently sparred with Carollo. Barreto also supported Carollo's 1995 election opponent, Victor De Yurre. At the same time, Barreto also owned a series of parking lots outside the then-existent Miami Arena.

Carollo openly admitted to the Miami Herald in 1996 that he sent city employees to shut down Barreto's allegedly illegal lots, but the city eventually let Barreto reopen them. Carollo claimed he was simply trying to trim "fat cats" from the city government, but the Herald said De Yurre's supporters were the ones who wound up hit hardest.

"This is just basic, vindictive politics," Barreto told the Herald in 1996. "It's all promoted by Joe Carollo. This is not a nice message the City of Miami is sending here."
KEEP MIAMI NEW TIMES FREE... Since we started Miami New Times, it has been defined as the free, independent voice of Miami, and we'd like to keep it that way. With local media under siege, it's more important than ever for us to rally support behind funding our local journalism. You can help by participating in our "I Support" program, allowing us to keep offering readers access to our incisive coverage of local news, food and culture with no paywalls.
Make a one-time donation today for as little as $1.