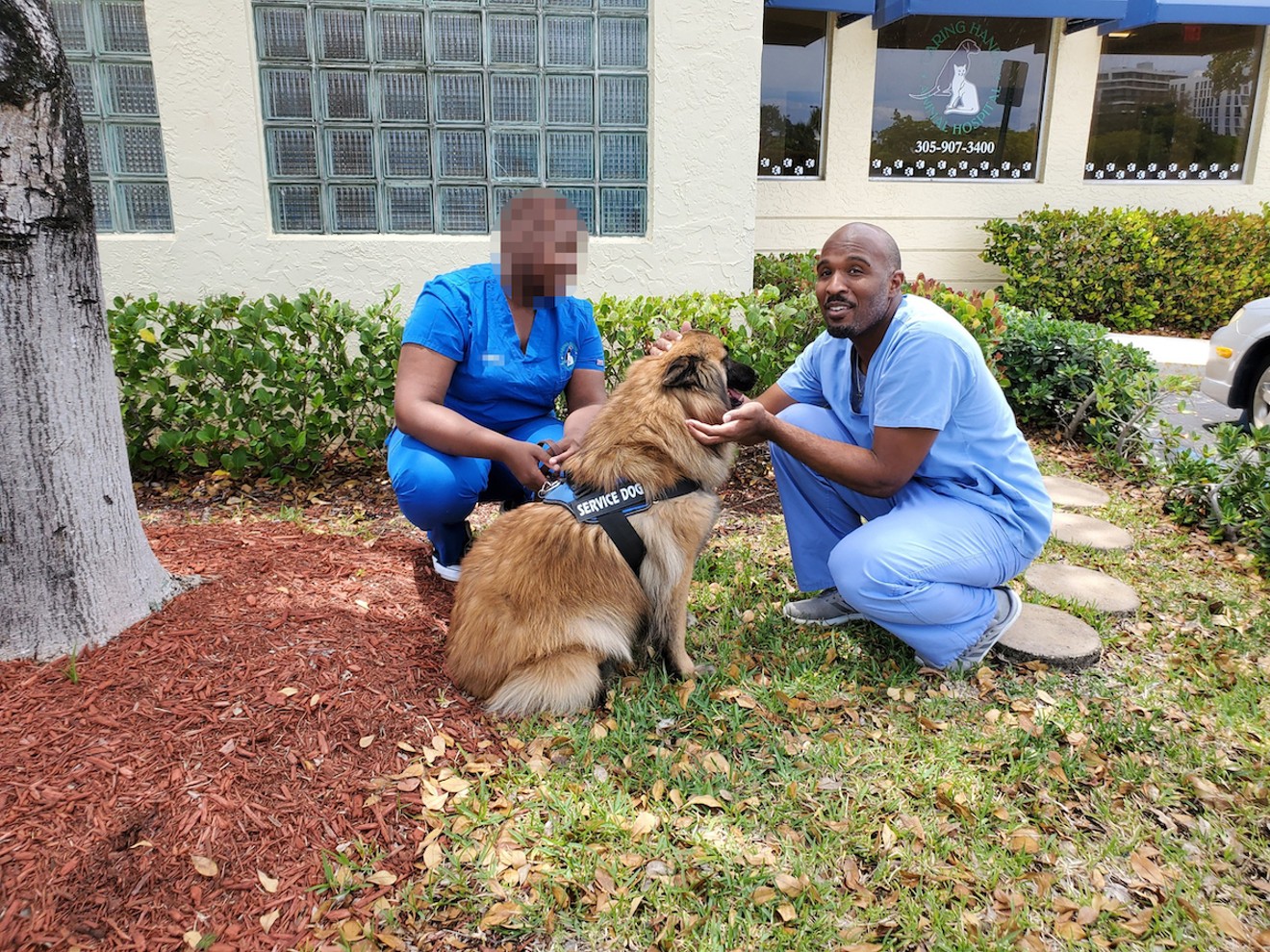 Scott Pruch and his wife, Robin Tobias, referred scores of friends and stray dogs to Caring Hands Animal Clinic in Aventura and the care of Dr. Prentiss Madden, the hospital's director. That is, until Madden was arrested in March on charges of alleged animal abuse and possession of child pornography.

"I thought he was great," Pruch tells New Times. "At first, we thought no dogs were ever harmed there. Then we find out it’s a lot worse than we thought."

When news broke of Madden's arrest in March, Pruch began fielding calls from pet owners he'd referred to Madden. But there were scant details of what exactly Madden was alleged to have done until last week, when the criminal complaint against Madden was unsealed in federal court.

On Thursday, Madden pleaded guilty to charges of receiving child pornography, possession of child pornography, and creation of "animal crush" videos, a term that refers to videos that depict the harming of animals for sexual gratification. Madden is the first to be charged in South Florida under the federal Preventing Animal Cruelty and Torture Act, which Donald Trump signed into law in 2019.

In addition to depicting Madden’s preference for underage people and a sexual relationship with a 15-year-old boy in Orlando, the criminal complaint describes in stark detail online exchanges between Madden and unidentified third parties, in which Madden admitted to and shared photos and videos of himself performing sexual acts on dogs. One of the videos was filmed at Caring Hands.

The U.S. Attorney's Office has not released any images they retrieved from Madden's devices, leaving little recourse for former clients who seek to determine whether their pet had been abused.

Prosecutors in Madden's case could not confirm to New Times if the owners of the dogs identified in the photos were contacted and told about what occurred.

“That’s the most disgusting thing. Nobody knows what happened in there,” says pet owner Gina Silvestri, referring to the clinic’s COVID-19 protocols, which forbade pet owners from accompanying their animals into the facility. She worries about her own service animal, Sasha, who was left alone with Madden without her supervision. “It’s horrifying.”

Silvestri has been taking Sasha the Hero Dog to Dr. Madden since she adopted him in 2019. Sasha is known for his various humanitarian efforts, including rescuing a missing 10-year-old boy in Hallandale Beach and his work as an emotional support animal for families at the site of the Surfside condo collapse.

Since Madden was a good doctor to Sasha, Silvestri says, when people came to her for a South Florida veterinarian recommendation, she referred them to him. Now she's wracked with remorse.

"Do you know how many clients I sent him? Tons," Silvestri laments. "I feel regret, especially with the people I sent there. How do you make amends for that? I don't know."

Regina Vlasek, president of Saving Sage Animal Rescue in Fort Lauderdale, worked frequently with Caring Hands. She says she cross-referenced all records of animals she brought to Madden with the dates mentioned in the criminal complaint corresponding to Madden admitting to abusing dogs. Though she was relieved to find no correlation, she feels little consolation.

"It leaves you with a very uneasy feeling in general towards people — like, do you ever really know anybody? If they’re capable of such horrible things, and they hide in plain sight," Vlasek says.

The complaint described a May 2019 text exchange in which Madden told another person that a brown-and-white dog he was performing sexual acts on was one he was keeping because it “needed a home.” Scott Pruch and Robin Tobias realized that the timing coincided with a brown-and-white Shih Tzu — named Pamela Anderson — they sponsored at Caring Hands after her previous owner died.

"What made me pissed off is there's a good chance it might have been Pamela — she fit the description," says Pruch, taking long pauses to compose himself.

When later contacted by New Times, the U.S. Attorney's Office confirmed that the white-and-brown dog depicted in the photo with Madden was not a Shih Tzu, and therefore could not have been Pamela. Pruch was relieved when New Times relayed the message, but he remains devastated that an innocent animal was abused by a person entrusted with its care.

Because Madden’s patients can't speak for themselves, it's difficult for Madden's former clients to know if their own pet was abused, and, ultimately, to build a legal case against him for damages.

"I have a couple clients who called about this, but I don't know if I can bring a case," Lauren Turner, an animal-rights attorney based in Broward County, tells New Times. "A dog can't tell me if it was one of his victims. It’s an evidence issue."

Turner says pet owners might be able to bring medical-malpractice suits against Madden, though it may hinge on obtaining photographic evidence that their animal was abused. Turner has not filed suit against Madden or Caring Hands Animal Hospital.

At the time of Madden's arrest, Caring Hands released a statement saying it fired Madden when they learned he was under investigation for "heinous and unthinkable crimes," and that the facility would cooperate with law enforcement.

Reached by New Times via email, a Caring Hands employee says the animal hospital turned over veterinarian schedules and computer system access to federal investigators but were unable to share security surveillance from the time Madden allegedly sent the videos because their cameras only store footage for 60 days.

In an emailed statement to New Times, Caring Hands president Michelle Vitulli thanked the U.S. Attorney’s Office and the federal authorities for bringing Madden to justice. She calls Madden's guilty plea “a significant step forward for our family at the Animal Hospital, and the community as a whole, in the process of healing and closure."

Madden was known by colleagues, pet owners, and animal activists as a person who cared deeply for animals and worked long hours to keep the animal hospital running. At least one service animal was named after him.

Former clients considered Madden a hero doctor. Now they want to see him put away.

"I hope he gets the max sentence for someone who betrayed all his clients,” Vlasek says. “He's a sociopath who represented himself as someone who loved and cared for animals.”

Madden will be sentenced in October. He faces more than 20 years in federal prison.
KEEP MIAMI NEW TIMES FREE... Since we started Miami New Times, it has been defined as the free, independent voice of Miami, and we'd like to keep it that way. With local media under siege, it's more important than ever for us to rally support behind funding our local journalism. You can help by participating in our "I Support" program, allowing us to keep offering readers access to our incisive coverage of local news, food and culture with no paywalls.
Make a one-time donation today for as little as $1.