What's Up With the "Armadillos" on the Venetian Causeway? 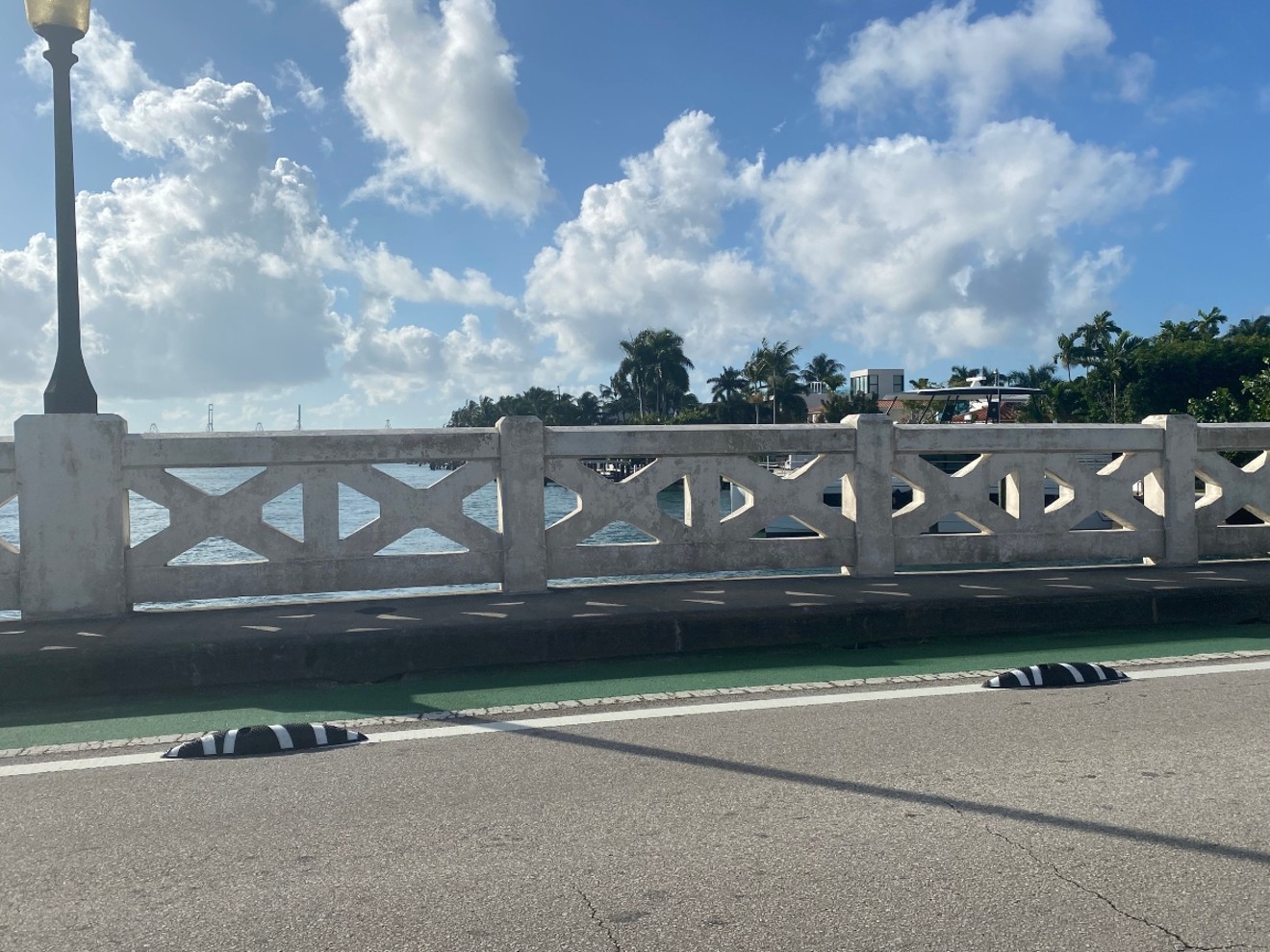 Don't worry, your tax dollars aren't being used to place armored mammals on public roads. Those hard-earned simoleons are, however, being used to install relatively small, striped, armadillo-shaped plastic barriers between the bike and traffic lanes. The idea is that the devices will protect cyclists by alerting drivers that they've drifted too far from their lane with a jarring thump.

The little plastic humps dot the roughly three-mile span that stretches across Biscayne Bay and connects Miami Beach to the mainland. Officials from Miami-Dade Transportation and Public Works did not return multiple requests for comment via email and phone from New Times. We'll update this post with any information if warranted.

In a metropolis that's as infrastructure-challenged and cyclist-averse as Miami, one might assume that such an initiative meant to support the safety and wellbeing of cyclists would be met with little resistance. But in reality, the plastic armadillos have split the 305's recreational and commuter cycling ranks. So much so that a petition to remove the plastic barriers — which began circulating at the start of the week — had garnered more than 1,250 signatures as of Thursday evening.

Some cyclists are saying that the barriers are stationary catalysts for disasters and counterproductive. Essentially the recreational cyclists are less afraid of the cars and more afraid of what will happen should their bike tires come into contact with the plastic when passing slower bike commuters.

"The obstacles pose a greater risk to cyclists than the distracted drivers they are meant to keep out of the cycling lanes," one commenter observed on the petition site. "A cyclist attempting to avoid debris, a pothole or pedestrians in the bike lane can be forced into a barrier that due to its shape and dimensions will certainly cause the cyclist to fall."

"I almost ate the ground because of this," commented another.
The League of American Bicyclists estimated in 2016 that less than 1 percent of Miami commuters use a bicycle to get to and from work.

Miami consistently ranks among the deadliest cities in the United States for cyclists. In 2020, the Florida Department of Highway Safety and Motor Vehicles reported 756 bicycle crashes in Miami-Dade; 697 resulted in injury, and 13 were fatal.

Cyclists here have found an ally in the county's new transportation and public works director, Eulois Cleckley, who told New Times in September that he preferred to get around via bike and had ambitions to make Miami a "car-optional" city for commuters.

Michelina Witte, program manager for the Miami-based nonprofit BikeSafe, tells New Times that, although the installations are not a cure-all, the armadillos represent an important development in making area bike lanes safer for those who prefer to push a pair of pedals to get around.

"The faction that's speaking up saying they don't want them are the faction that rarely shows up in advocacy for cyclists," Witte says. "This is a minor annoyance that they have these barriers for a stretch of land that's barely four miles of your 40-mile ride where you simply have to be more vocal and, frankly, more patient. God forbid you slow down."

David McMillan, a daily bicycle commuter and recreational cyclist, tells New Times he travels across the Venetian on a near-daily basis. The way he sees it, the situation is far more nuanced than being "for" or "against" the armadillos.

Yes, the small, plastic barricades are potentially dangerous in certain circumstances, but they are a sign of symbolic progress.

"The roads here were designed for cars, so if you go to jet out and you catch a wheel on one of these things, the trajectory puts you in the car lane," he says, speaking to the narrow width of the bicycle lane.

But by the same token, McMillan says, the mere presence of the armadillos signals to cyclists that the roads are being redesigned for them, too.

"These are an invitation that says 'This space is made for you,'" he says. "When I look at it I think, Wow this road is made for me too, not just for cars."
KEEP MIAMI NEW TIMES FREE... Since we started Miami New Times, it has been defined as the free, independent voice of Miami, and we'd like to keep it that way. With local media under siege, it's more important than ever for us to rally support behind funding our local journalism. You can help by participating in our "I Support" program, allowing us to keep offering readers access to our incisive coverage of local news, food and culture with no paywalls.
Make a one-time donation today for as little as $1.