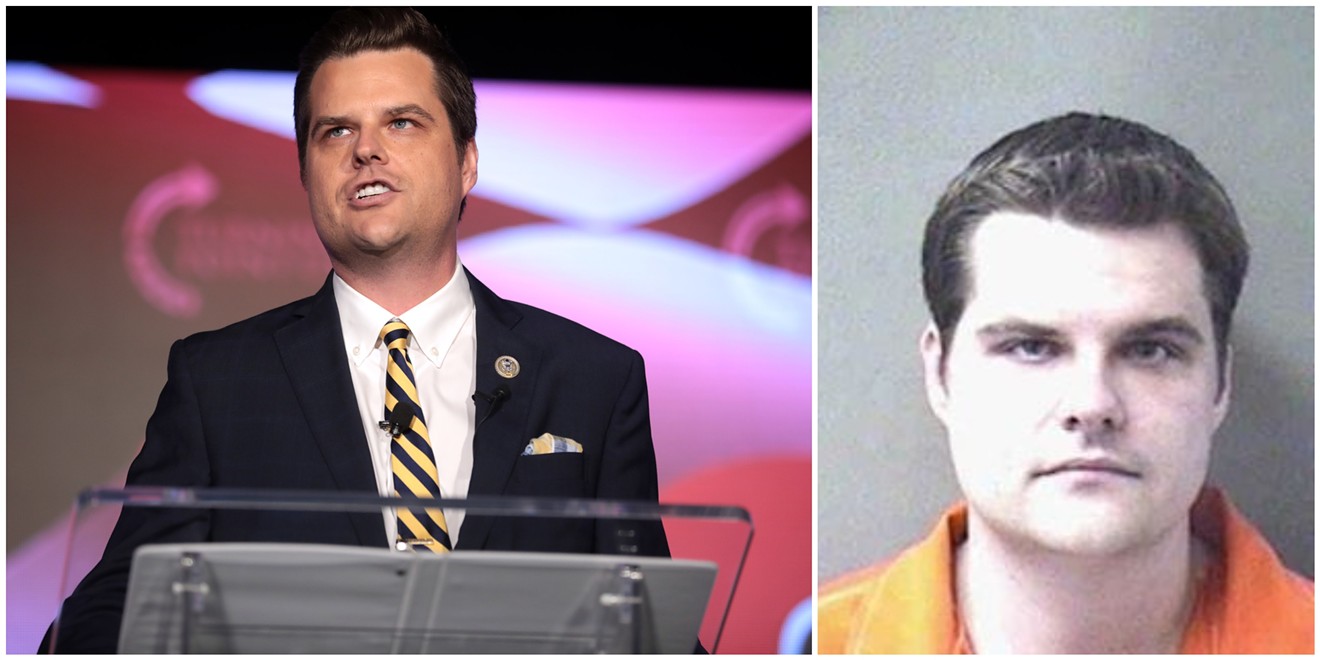 Florida Rep. Matt Gaetz was arrested for DUI in 2008. Photos by Gage Skidmore / Flickr; Okaloosa County Sheriff's Office
Florida congressman and human tumor Matt Gaetz is, for the most part, talentless. He has a job because his dad, former state lawmaker Don Gaetz, paved the way for him. He wasn't born with a silver spoon in his mouth as much as he was born sitting atop a gigantic Rolodex of lobbyist phone contacts. By all accounts, he grew up as an entitled twerp of a kid: He infamously received 16 speeding tickets between 1999 and 2014 and was arrested for DUI in 2008 after refusing to take a Breathalyzer test.

Over the years, some of Gaetz's defenders have argued he ought to be forgiven for the transgressions he committed as a (*checks notes*) 26-year-old adult. But his conduct today should serve as a reminder that he instead needs to be shamed out of public life. During a Trump impeachment hearing this afternoon, Gaetz used his time to make fun of fellow child-of-privilege Hunter Biden for — you guessed it — driving under the influence.

"Hunter said that, at that point, he had not slept for several days," Gaetz said today. "Driving east on Interstate 10 just beyond Palm Springs, he lost control of his car, which jumped the median and skidded to a stop on the shoulder of the westbound side."

Gaetz went on to note that Hertz car rental agents collected the damaged vehicle and found crack and cocaine paraphernalia inside. Of course, Hunter Biden, son of former vice president Joe Biden, has made it no secret he has struggled with crack addiction over the years. But his drug issues are neither germane to the time he spent working with a Ukrainian natural-gas company, nor are they something Gaetz has any right to criticize.

Hank Johnson: "The pot calling the kettle black is not something we should do" pic.twitter.com/Px0vXCD2fX

Gaetz was rightfully lambasted. Georgia Rep. Hank Johnson, who represents the Atlanta suburbs, somehow laid into Gaetz and made him look like a fool while also remaining somewhat civil from his perch on the dais.

"I would say that, uh, the pot calling the kettle black is not something that we should do," he said as a chorus of laughter erupted in the room. "I don't know what members, if any, have had any problems with substance abuse, been busted in DUIs, I don't know. But if I did, I wouldn't raise it against anyone on this committee. I don't think it's proper."

New Times, however, has no such qualms with pointing out that police stopped Gaetz for driving 13 mph over the speed limit in 2008 after leaving a Panhandle nightclub presciently named the Swamp. Gaetz claimed to have consumed only two beers, but officers noted he seemed physically impaired and could not pass a field sobriety test performed on his eyes. He then refused a Breathalyzer test.

Somehow — definitely not because his dad was a lawmaker — Gaetz got his license back pretty quickly. Despite the fact that Florida law stipulates his license should have been revoked for at least a year, his suspension lasted less than 12 months. And two years later, he was elected to the Florida House of Representatives.
KEEP MIAMI NEW TIMES FREE... Since we started Miami New Times, it has been defined as the free, independent voice of Miami, and we'd like to keep it that way. With local media under siege, it's more important than ever for us to rally support behind funding our local journalism. You can help by participating in our "I Support" program, allowing us to keep offering readers access to our incisive coverage of local news, food and culture with no paywalls.
Make a one-time donation today for as little as $1.