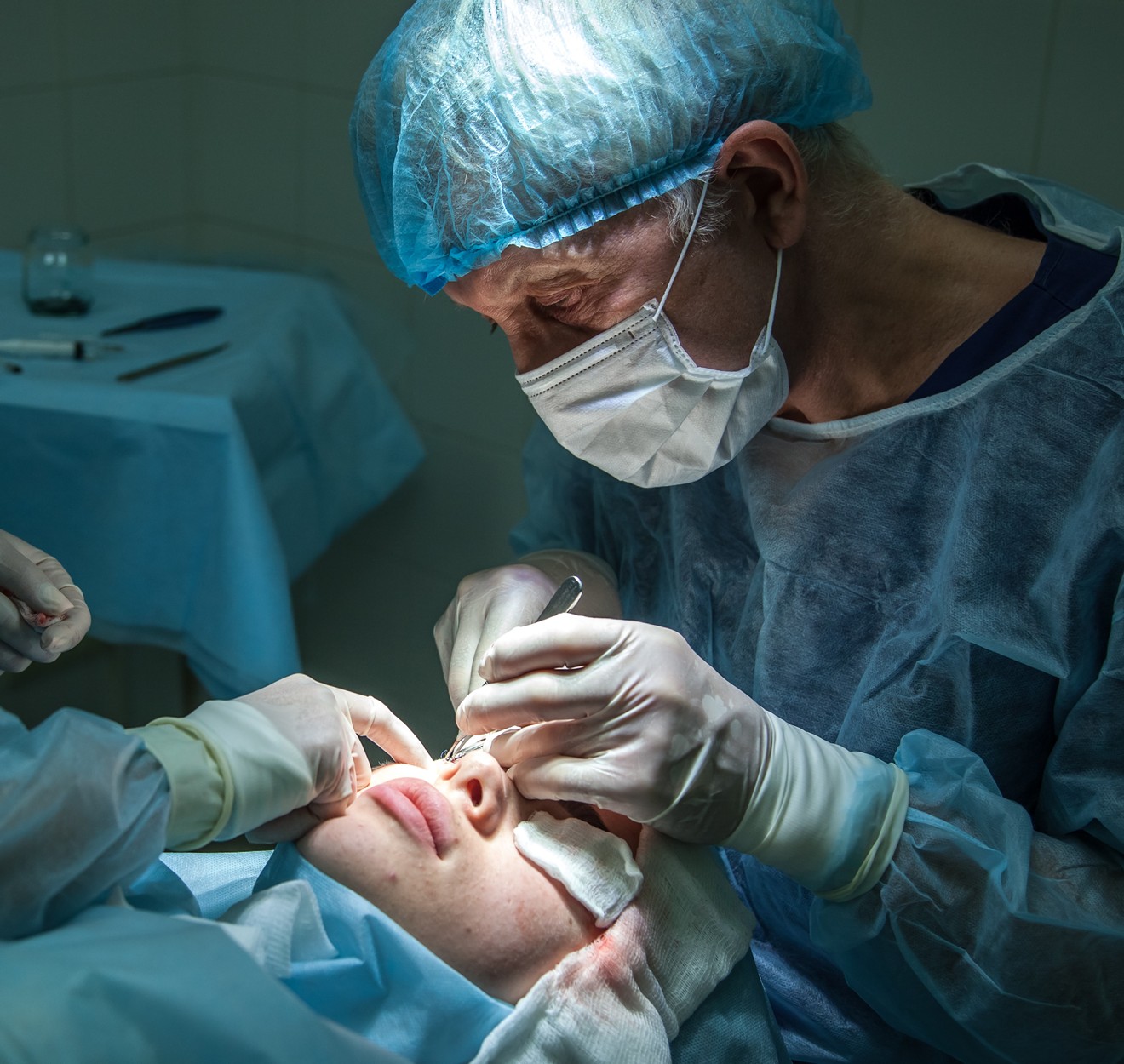 Dr. Adam Rubinstein is a plastic surgeon based in Aventura. On his Instagram page, Plastic Surgery Truths, Rubinstein answers common questions about procedures and talks about doctors with shady pasts in a series called "Exposed." In August 2018, Rubinstein posted a series of videos about Dr. Simon Ourian, a cosmetic surgeon endorsed by the Kardashian family.

Rubinstein described numerous allegations levied against Ourian by the Medical Board of California, stating that his fellow cosmetic surgeon was placed on probation in 2009 after several patients alleged they were injured during laser sessions.

"Dr. Ourian, according to his website, practices cosmetic dermatology. Only, we looked into Ourian's background and were surprised at some of the things we found," Rubinstein says in the first video of the series. "Dr. Ourian doesn't seem to have completed any residency training in dermatology nor plastic surgery. And that's just the beginning of the story."

Rubinstein says that after he posted the four-episode segment, he began receiving negative comments on his Instagram pages and strange negative reviews on Google that he believes are connected to Ourian.

Ourian has filed a motion to dismiss the lawsuit, arguing that the court doesn't have jurisdiction to hear the case because Ourian doesn't do business in Florida. The motion does not address the charges in the complaint. Ourian and his lawyers did not respond to several emails and phone calls from New Times last week.

Siamak "Simon" Ourian is a celebrity surgeon in Beverly Hills who has reportedly performed procedures for the Kardashians, Lady Gaga, Salma Hayek, and other entertainment A-listers. He has been featured in a number of beauty publications and social-media posts, and his personal Instagram has 3.5 million followers. But little has been said about Ourian's past, which includes a five-year probation term for medical negligence and allowing an unlicensed doctor to perform surgery in his presence.

In a 96-page stipulated settlement order from 2009, the Medical Board of California and the Department of Consumer Affairs detailed the stories of five of Ourian's patients who accused him of gross negligence, incompetence, and dishonest and corrupt acts.

In almost every case, the patients came in for minor bumps or blemishes, for which Ourian prescribed his trademarked "Coolaser" treatment at a cost of several thousand dollars. According to the medical board, Ourian failed to keep an adequate record of his patients' consultations, his patients' medical histories, the procedures he used, or at what strength he applied the laser.

At one point, when asked by an investigator why he didn't keep maintain the records, Ourian replied that notes are "sometimes used against him, when a patient is unhappy with the result, and the issue goes to court," according to the filing.

Rubinstein explains to New Times that doctors are required to take thorough notes when interacting with patients in order to maintain an accurate medical history — and one that can be reviewed in the event something goes wrong.

"If you don't record exactly what you did, there's no way to substantiate what happens to a patient. Records are critical," Rubinstein says.

In multiple instances outlined in the California case, patients complained about severe burning after being treated with Ourian's Coolaser, only to be dismissed by the doctor and his assistants and told they should continue with the program until they completed three treatments.

One patient said she couldn't open her mouth to eat or speak after being treated with the Coolaser.

In another instance, a patient agreed to pay Ourian $3,700 to inject filler in her wrinkles and to use Coolaser on certain facial spots. Though she did not consent to anything else, Ourian's notes state that he used laser treatments and a scalpel to remove malignant lesions from her skin and never sent them to a lab to be tested. The patient said she did not go to Ourian with any lesions — just wrinkles and discoloration. She also said she suffered severe burning on her neck after the treatment.

The board found that Ourian did not have the patient's consent to perform scalpel treatment and that the use of a laser on her blemishes was contrary to standard practice. That one complaint led the board to charge Ourian with multiple negligent acts.

In another instance, the board charged Ourian with aiding and abetting a facelift procedure performed by an unlicensed doctor. Starting in 2004, Ourian allowed Daniel Serrano to perform multiple facelifts in his office after hours while Ourian observed, according to the indictment. Serrano, who comes from Argentina, was not a licensed doctor in the U.S. and was not licensed to perform surgical procedures.

Serrano testified that Ourian said it was all right for him to perform the procedures in his office as long as Ourian was there to observe and supervise.

Initially, the board moved to revoke Ourian's medical license. In the end, though, it elected to impose a five-year probation term instead, barring him from practicing medicine without supervision and ordering that he take several courses on ethics and record-keeping. His probation was lifted in 2013.

Rubinstein says he was contacted on Instagram in 2018 by several of Ourian's patients who said they had bad experiences and wanted Rubinstein to look into the doctor. After some digging, Rubinstein discovered the probation term and learned that Ourian, who bills himself as a cosmetic surgeon, is not board-certified in plastic surgery.

Ourian is not listed in the database of the American Board of Plastic Surgery or on certificationmatters.org. Instead, he is licensed as a physician/surgeon with the California medical board. The difference, Rubinstein notes, is that in order to be board-certified in plastic surgery, a doctor first must perform three additional years of discipline-specific training and pass rigorous tests.

Although doctors aren't required to obtain board certification before performing plastic surgery, Rubinstein contends that patients should be informed about their doctors and exercise caution when choosing a surgeon.

"You wouldn't ask a boat captain to fly you to New York," he says.

After Rubinstein published his videos in 2018, Ourian's office, Epione Medical Corporation, sent him a cease-and-desist letter.

In the letter, Epione stated that Ourian is a respected professional and "has spent decades building a positive reputation." It accused Rubinstein of "maliciously" spreading inaccurate information about him and threatened legal action if he didn't stop.

Rubinstein says he found the letter laughable because it didn't come from an attorney.

Owing to copyright concerns, Rubenstein took down the original videos and remade them with royalty-free images. He then shared the new videos on Instagram for his audience of almost 34,000 followers.

Then came the Russians.

"We got a deluge of nasty comments. All sorts of crazy things saying I'm a terrible doctor, I botched this, I botched that. But I didn't recognize any of the names," Rubinstein tells New Times. "I received about 60,000 or so fake comments on my Dr. Rubinstein account and 25,000 in Plastic Surgery Truths."

In the ensuing months, Rubinstein says, accumulated scores of one-star reviews on Google and other sites claiming he'd botched surgeries.

Over the same period, positive reviews for Ourian began popping up from the same people. Rubinstein received scores of poor reviews on Google from accounts he didn't recognize.
Screenshot courtesy of Adam Rubinstein
Rubinstein says he got two or three bad reviews a day from people whose names he didn't recognize. Although he suspected Ourian, he couldn't confirm it until he got a Facebook message from someone who claimed he'd been hired by a service in Russia to write fake reviews about the two surgeons.

Screenshots sent to Rubinstein and provided to New Times show what appear to be work orders written in Russian that clearly name "Adam Rubinstein." The alleged work orders include boxes where the text is translated into English that matches some of the poor reviews Rubinstein received. 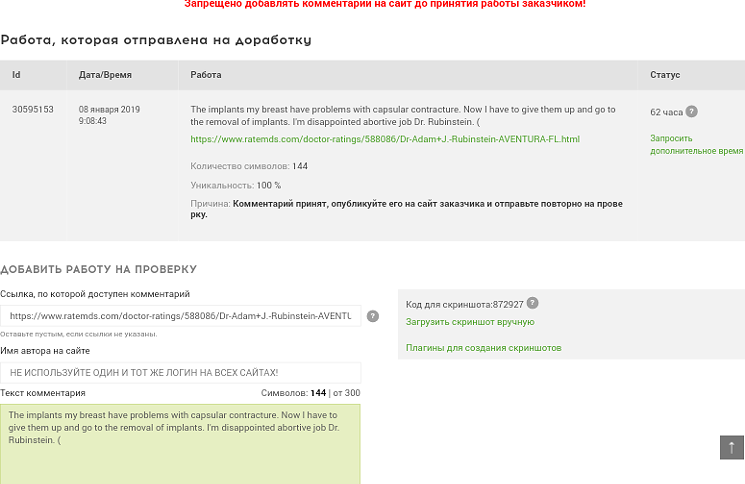 Alleged work order from the Russian website with the translated review at the top and bottom left.
Screenshot courtesy of Adam Rubinstein
click to enlarge 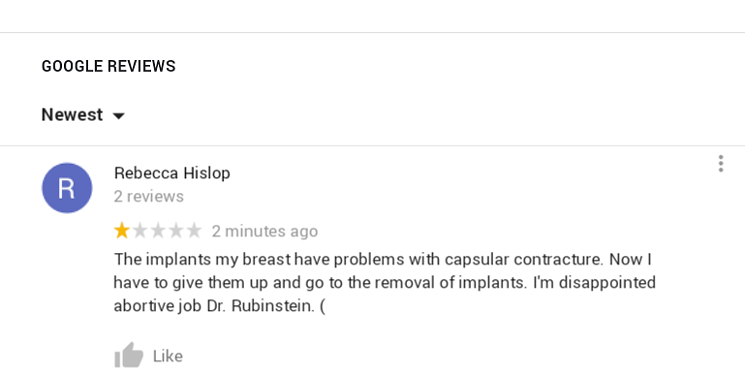 A Google review for Dr. Rubinstein identical to the alleged Russian work order.
Screenshot courtesy of Adam Rubinstein
In one example, the alleged work order from the Russian site has a box with a 300-character limit, and a translated paragraph that says, "I'm disappointed abortive job Dr. Rubinstein. (."

In a Google review from "Rebecca Hislop," who has published only two reviews, the same message appears with the same grammatical errors and open-parenthesis.

A Russian translator contacted by New Times says the website contains instructions that include "publish reviews only from an American VPN or proxy server," "write about Dr. Adam Rubinstein," and "if you go overboard, you're wasting your time."

Rubinstein says the person who reached him on Facebook told him that Ourian hired the Russian company to write fake reviews blasting Rubinstein and boosting Ourian. Rubinstein brought the matter to Google support services, which took down some of the reviews after concluding they were fake.

"My practice was able to keep rolling and I did OK, but I'm certain we lost a significant amount of business based on this situation," Rubinstein says.

In a motion to dismiss the suit, Ourian's lawyers in Miami said the California doctor is a world-renowned cosmetic physician who has served high-profile celebrities and "the world's royalty," and that many have tried to mar his reputation as a means of seeking clout.

"Unfortunately, Dr. Ourian's expertise and skill have made him the target of lesser-known doctors, such as Dr. Rubinstein, who wish to leverage Dr. Ourian's good name as a marketing tool for themselves," the motion states.

The case was filed in May; a trial date has not been set.
KEEP MIAMI NEW TIMES FREE... Since we started Miami New Times, it has been defined as the free, independent voice of Miami, and we'd like to keep it that way. With local media under siege, it's more important than ever for us to rally support behind funding our local journalism. You can help by participating in our "I Support" program, allowing us to keep offering readers access to our incisive coverage of local news, food and culture with no paywalls.
Make a one-time donation today for as little as $1.