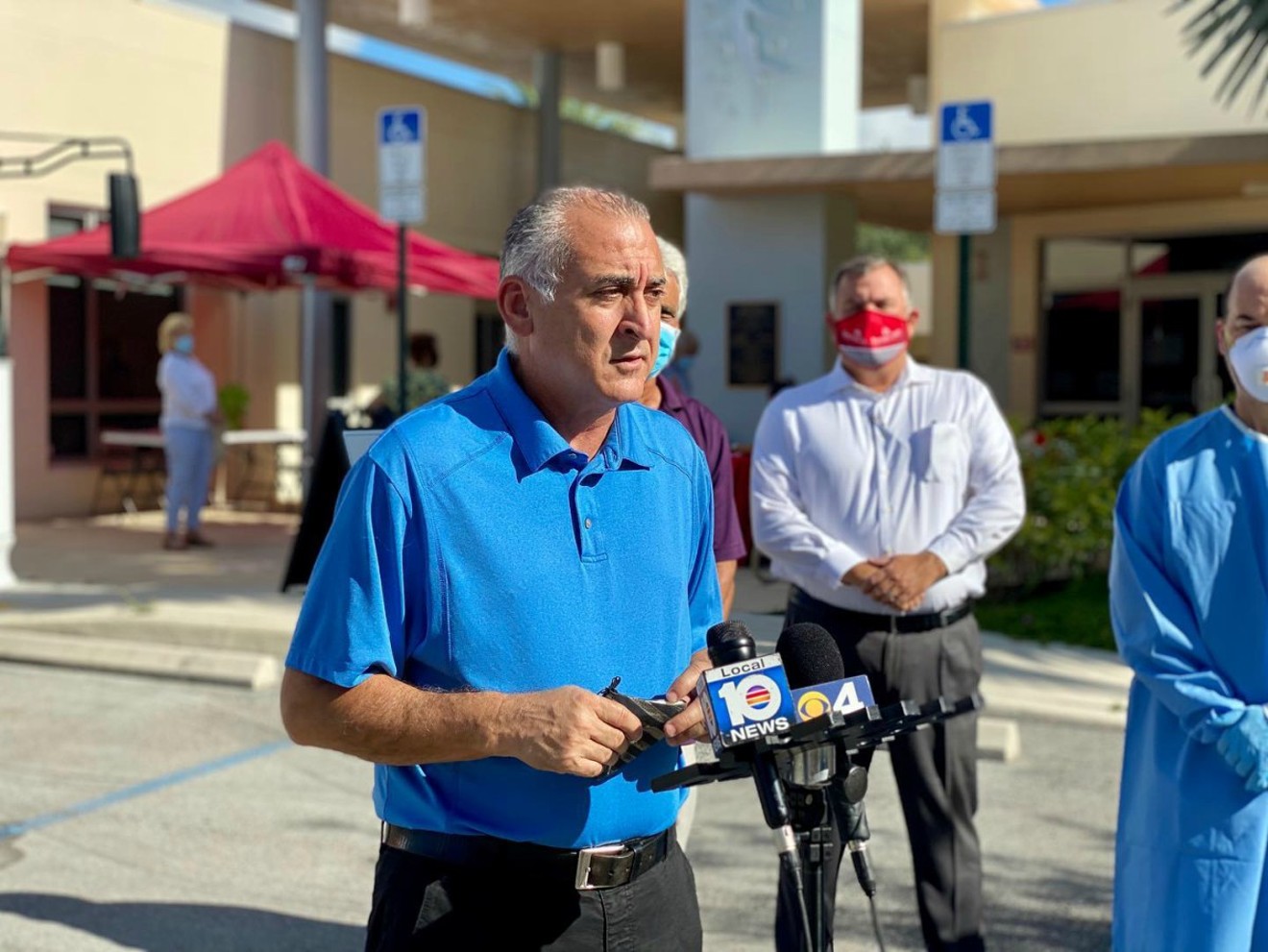 Miami-Dade commissioner and mayoral candidate Esteban Bovo Photo by Commissioner Esteban Bovo/Facebook
Update, 1 p.m.: After New Times published this story, Esteban Bovo responded to questions from Miami Herald reporter Douglas Hanks about his brother Enrique Bovo's Facebook posts, saying he did not know about the posts before the story was published. Esteban Bovo responded that his brother is not part of his campaign but said that he himself does not agree with the "agenda" tied to Black Lives Matter. The candidate said his position is that "all lives matter" and that he hasn't seen any evidence of systemic racism in county government.

In a self-described hate group on Facebook, the brother of a Miami-Dade County mayoral candidate disparaged the Black Lives Matter movement and supported locking and loading for a "civil war."

Enrique Bovo — who also goes by Henry — is the younger brother of Miami-Dade County Commissioner Esteban "Steve" Bovo, who is running for the county mayoral seat against fellow commissioner Daniella Levine Cava in a November runoff election. Esteban Bovo styles himself as the conservative candidate for mayor and has aligned himself with President Donald Trump.

Enrique Bovo was until recently an administrator for a public Facebook group called "blm hate group." The page description called it a "non racial hate group against blm."

Screenshot via Facebook
When reached by phone, Enrique Bovo agreed to answer questions about his involvement in the group after commenting that New Times "writes nonsense anyway."

The Facebook group was formed on August 30 and has about two dozen members. Enrique Bovo says he was given administrative authority by a friend who started it.

"They sent me messages saying they couldn't be a part of it, and they made me admin," he says. "I don't believe in what [Black Lives Matter] stands for. Destroying our country is not protesting."

When asked if he was also against Black Lives Matter's calls for racial equality, Enrique Bovo responded that he is not a racist.

The founder of the group, a Tallahassee deli clerk, remains active and posts almost daily.

"When we go to civil war against blm and antifa we all gonna stand and fight," the founder wrote in one post.

In the comments, another group member said he was "locked and loaded," to which the founder replied that he only had a knife.

Further down in the comment chain, Enrique Bovo wrote, "Hell yes, fuck them commies," and posted an image of actor John Wayne in a military uniform with the text, "In my day you were either pro-America or a commie."

The commissioner's brother says he doesn't own a gun and doesn't believe in violence.

"I am a conservative, I like my freedom, and I am for the police," he says.

Enrique Bovo says his brother probably doesn't know about his involvement in "blm hate group" and that the mayoral candidate has nothing to do with his posts. But it's clear from group posts that Enrique Bovo wanted others to know his brother is in a position of power.

On August 31, Enrique Bovo posted a photo of his brother with Miami-Dade County Mayor Carlos A. Giménez and other county officials meeting with Trump at Miami International Airport in July.

"My brother is running for Mayor of Miami-Dade County, here he is welcoming our commander and chief [sic] to Miami," the caption read.

Screenshot via Facebook
New Times reached out to Esteban Bovo's campaign office for comment about his brother's posts but has not received a response.
KEEP MIAMI NEW TIMES FREE... Since we started Miami New Times, it has been defined as the free, independent voice of Miami, and we'd like to keep it that way. With local media under siege, it's more important than ever for us to rally support behind funding our local journalism. You can help by participating in our "I Support" program, allowing us to keep offering readers access to our incisive coverage of local news, food and culture with no paywalls.
Make a one-time donation today for as little as $1.