The pink room at Unit 1610 in the Cricket Club condominium Screenshot via Zillow
For years, unconventional homes equipped with underwater scuba tunnels, creepy jail cells, and subterranean dome homes have graced the über-popular social media account Zillow Gone Wild, which scours millions of properties on the Zillow database to share the most "wild." On Thursday, one uniquely Miami listing made the cut.

Welcome to Unit 1610 at the Cricket Club condominium in North Miami.

"[Every] home needs two things," the @ZillowGoneWild post teases, "and this Miami home has both."

While Unit 1610 boasts sweeping views of Biscayne Bay and the downtown Miami skyline, the account is most likely referring to the eyebrow-raising design of its two color-coordinated rooms: the pink room, a rotunda with mirrored ceilings and wall panels and a sumptuous bubblegum-pink couch, and the green room, which is steeped in shamrock-green wallpaper, wall-to-wall carpeting, and pillow accents. Both rooms evoke the feelings of a 1970s interior-design time capsule, and listing agent Judy Luck Jordan of Berkshire Hathaway HomeServices EWM Realty has been bombarded with calls from interested buyers and collectors all around the nation since the post went up.

"It's a unit in time," Jordan tells New Times. "It's even cooler than the photos look. People walk in and go, 'Wow!'"

As the modern farmhouse aesthetic wanes in popularity, the online fascination with this unit speaks to the comeback of 1970s interior design.

"The 1970s are definitively on trend in design," Giampiero Tagliaferri, principal of Studio Tagliaferri and former creative director of Oliver Peoples, told Vogue earlier this year. "The design of the time was fun and sexy but still sophisticated — I think that heavily resonates with modern audiences."

"I'm expecting James Crockett (Don Johnson) and Ricardo Tubbs (Philip Michael Thomas) to walk in at any moment, guns drawn, wearing clothes that match [the] decor in color," commented one user on Facebook.

"The exterior reminds me of the opening credits to the Golden Girls. I'd like to imagine this was Blanche's party pad," wrote another.

"Omg! That pink circle couch room - it's like you're [sic] own Genie Bottle!" typed a third. The green room in Unit 1610
Screenshot via Zillow
The unit resides inside the storied Cricket Club, an upscale 21-story waterfront condominium built in 1975. Back then, the edifice lured in the glitterati and partygoers with its eponymous basement discotheque. Though the former discotheque has been converted into a storage area, Jordan says, the building remains a close-knit enclave that boasts a cocktail lounge, book clubs, holiday parties, and "tons of activities." Jordan's mother has lived in the building for nearly 40 years.

"We used to go there and dance," the real estate agent recalls of the Cricket Club. "They had these great red vinyl chairs. It was the place to go in the great days of John Travolta and all those songs."

Unit 1610 belonged to Norman and Barbara Shapiro, who, according to a recent obituary published in memory of the latter, moved to Miami in 1957 from Westbury, a small village on Long Island. Jordan was friends with their daughter, Marcia Shapiro, which is how she acquired the listing. While agents tend to dread listings with eclectic design quirks and routinely restage units in a bath of whites and creams, Jordan says she "didn't touch a thing — nothing." Bathroom
Screenshot via Zillow
"It's a gorgeous design and very unique," Jordan says. "I showed it last night, and I was there for two hours on a call with a woman from Michigan who doesn't want to change a thing."

Marcia Shapiro says her parents were among the first occupants in the building back in 1975 and lived there until their deaths. Norman Shapiro, who died in 2015, worked for a kitchen cabinet company. Barbara, who died at age 92 in 2021, was a realtor who specialized in selling condominiums in Miami in the 1960s. 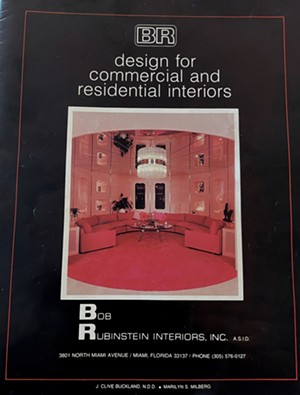 The cover of a vintage Bob Rubenstein Interiors pamphlet featuring Unit 1610 of the Cricket Club
Bob Rubenstein Interiors
"She was glamorous and gorgeous and like a movie star," Marcia says of her mother, who also collected Lalique and Lladro crystal. "She was so proud of that apartment and always wanted people to come in and see it — even during COVID. She never changed a thing."

Shapiro was in her 20s when her parents purchased the unit. Today she's a grandmother in her 70s who rescues dogs. The building's weight limitation on pets prevents her from moving into the time-capsule condo.

"I love that apartment, but there comes a time in life when you have to let go of the past," Shapiro says.

"But at least keep the rotunda," she adds, mindful of a new buyer's likely intentions. "I would go in there and lay on the floor and sofa and look up into the mirrors."

In addition to the pink and green rooms, Shapiro says, the unit is steeped in natural light, and with 2,320 square feet, spacious. It contains two bedrooms, his-and-hers closets, two balconies, and three bathrooms, all of which feature trippy polychromatic wallpaper and a fun house of wall mirrors from that era.

Interested buyers can reach Jordan at 305-934-6373 or [email protected]
KEEP MIAMI NEW TIMES FREE... Since we started Miami New Times, it has been defined as the free, independent voice of Miami, and we'd like to keep it that way. With local media under siege, it's more important than ever for us to rally support behind funding our local journalism. You can help by participating in our "I Support" program, allowing us to keep offering readers access to our incisive coverage of local news, food and culture with no paywalls.
Make a one-time donation today for as little as $1.