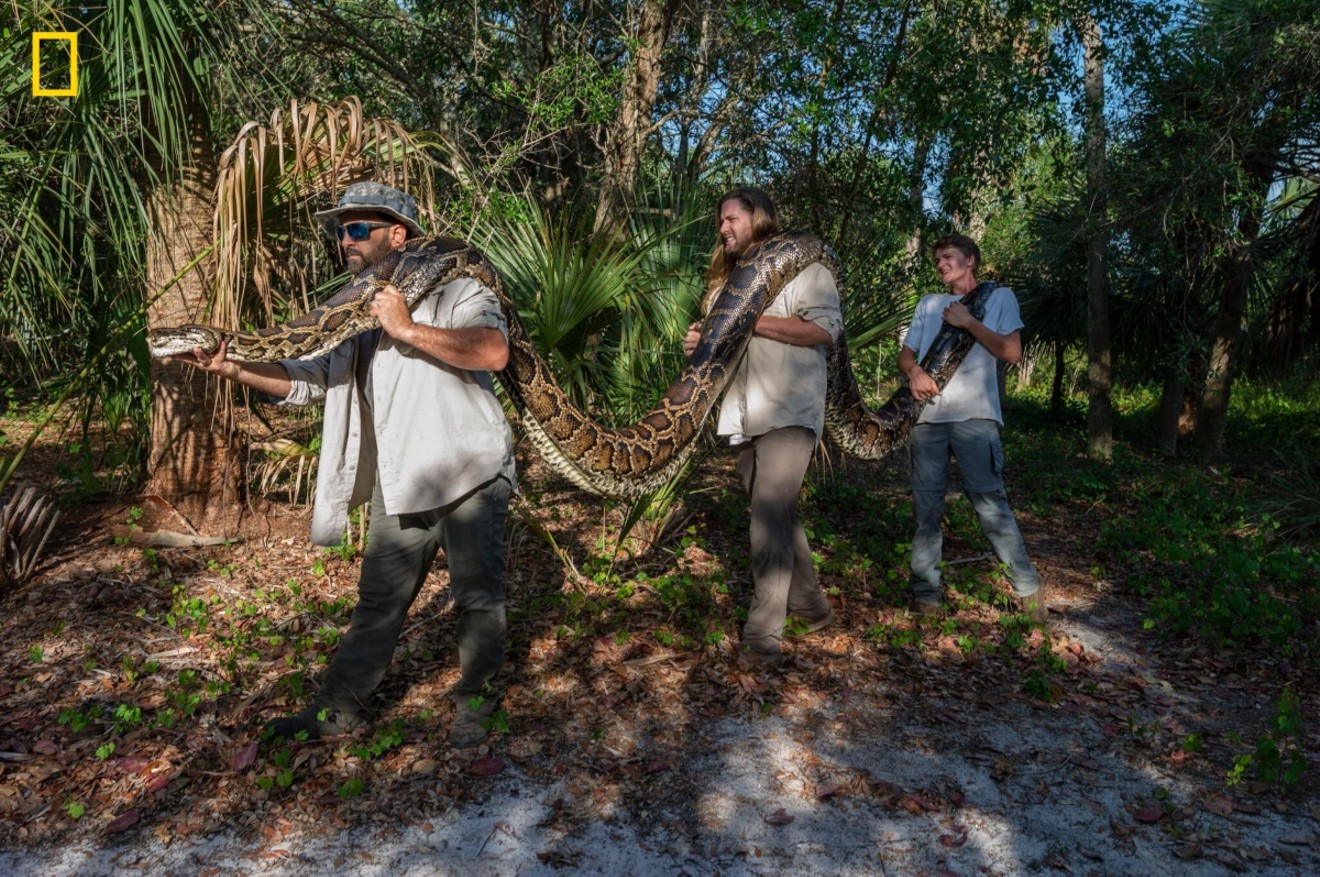 From left: Researchers Ian Bartoszek, Ian Easterling, and intern Kyle Findley transport a female Burmese python weighing 215 pounds and measuring 17.7 feet in length to their lab in Naples. Photo by Maggie Steber, National Geographic
Deep in the Florida Everglades lurk invasive beasts that slither just out of sight — and they just keep getting bigger. As first reported this week in National Geographic, last December python trackers with the Conservancy of Southwest Florida in Naples found and euthanized the largest Burmese python ever captured in Florida. The snake, a female, measured 17.7 feet long and weighed 215 pounds.

"This was good news, and the researchers were very satisfied and happy about finding her," says Douglas Main, senior writer and editor for National Geographic, whose team met with python researchers in Naples. "This one snake probably had hundreds if not thousands of offspring in her 15 to 20 years."

Pythons are an extremely invasive species native to Southeast Asia that were introduced to the local ecosystem via the exotic pet trade in the '90s. Pet owners released them into the Everglades (presumably when they grew too large to be kept indoors), where they encountered no natural predators. The snakes have systematically attacked native wildlife ever since, decimating populations of raccoons, possums, marsh rabbits, and other mammals.

The 215-pound python found in Naples had been snacking on native animals. After euthanizing the snake, researchers dissected it and found hooves in its digestive tract, indicating that its most recent meal was an adult white-tailed deer.

"Finding the deer inside the python shows that they're competing with native predators like Florida panthers for food, which is very concerning," Main says. "That's why it's important to catch huge animals like this."

The python also contained 122 proto-eggs — i.e., eggs that had yet to be fertilized but had the potential to become 122 more pythons that could have ravaged the Everglades.

What's striking about this particular python find — besides her size — was how she was captured, Main tells New Times.

Python hunters employed a fairly new method for finding the large and dangerous females: scout snakes. With this method, researchers place a GPS tracker on a male python and follow it until it finds a female (or females, if they're particularly flirty). When a male has stopped moving for a while, it signals that it may have cozied up to a potential mate. That's when hunters swoop in and bag the female.

The capture of a 215-pound female was a good indication that the method is successful. Researchers and trackers have had to employ creative tactics to find the stealthy pythons, which are almost impossible to spot.

"These snakes are so well-camouflaged, they tried to find it visually and they couldn't," Main says. "It blends in so well you could be standing right next to it and never know."

While Ausburn's snake was more than a foot longer, the behemoth caught in Naples was more than twice its weight, making it the biggest python on record.

Competitiveness aside, it's important that python hunters continue to nab and remove massive snakes to prevent further damage to the already weakened Everglades ecosystem. Florida contracts licensed hunters to take down pythons in the wild, and civilians are also allowed to kill them without a permit.

If you spot a python and aren't prepared to bag it yourself, you can call the Florida Fish and Wildlife Conservation Commission's invasive species hotline at 888-IVE-GOT1 (483-4681).

For more info on the monster python, visit National Geographic (subscription required).
KEEP MIAMI NEW TIMES FREE... Since we started Miami New Times, it has been defined as the free, independent voice of Miami, and we'd like to keep it that way. With local media under siege, it's more important than ever for us to rally support behind funding our local journalism. You can help by participating in our "I Support" program, allowing us to keep offering readers access to our incisive coverage of local news, food and culture with no paywalls.
Make a one-time donation today for as little as $1.