Chicken of the Trees: The Ultimate Guide to Catching and Cooking an Iguana 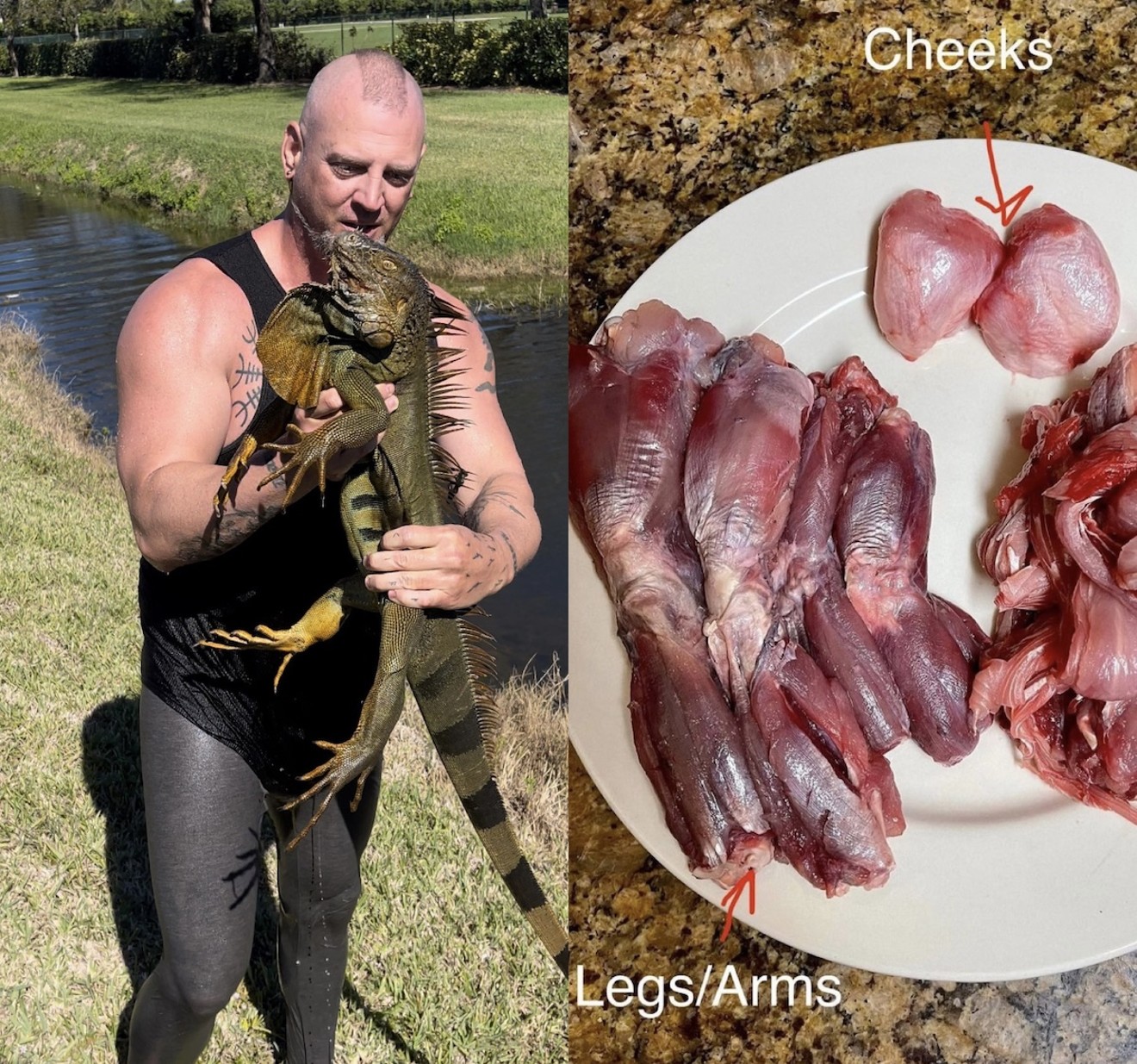 During the recent cold snap, South Florida native Ryan Ausburn caught more than a dozen iguanas to cook up in various preparations. Courtesy of Ryan Ausburn
Any Floridian south of Lake Okeechobee knows there's only one way to gauge a cold front, and it's by the number of iguanas falling from the heavens.

Though it might seem like one of the biblical plagues, the phenomenon has a scientific explanation. Essentially, iguanas are cold-blooded reptiles, and whenever temps dip below 45 degrees Fahrenheit, the critters slink into a cryonic coma of sorts. But don't bring out the blankets and hot cocoa to warm them up just yet.

Green iguanas are an invasive species in South Florida, and they feast on native (and endangered) tree snails and on the host plant of the endangered Miami blue butterfly. They burrow underground tunnels that can not only collapse seawalls and sidewalks but lead into residential sewer systems and perhaps even your toilet. Their droppings can be a nuisance. While they're not as detrimental as Burmese pythons or tegu lizards, the Florida Fish and Wildlife Conservation encourages homeowners to humanely kill iguanas on their property whenever possible.

And there's no better advantage than when they're in their diminished zombie state.

So it was that before the iguanas started to rise with the mercury in the thermometer last weekend, South Florida native Ryan Ausburn and some friends captured roughly 15 of the creatures, humanely dispatched them with a pellet gun, and fired up the grill. Ausburn generously shared his capture tactics and recipes with New Times.

"I did burgers last night with the tail meat," he says. "Just ground it up with a bunch of seasonings, threw it on the grill, and made it just like any other burger. It actually came out pretty good."

It should be noted that iguanas aren't Ausburn's reptile of choice. He's a state-contracted python hunter who uses snakeskin to create wallets and purses. Last year, he captured a 19-foot python. Iguanas, which can grow to about six feet long, seem like small potatoes in comparison. But given the unusual cold spell, Ausburn and his friends figured they'd take advantage. They dove into a canal near Davie and plucked out the iguanas one by one. In one video he posted on Instagram, Ausburn can be seen triumphantly displaying the iguana as if it were a WWE championship belt.

"It's not something we do on a regular basis," Ausburn notes. "But every time we do remove them, I'll cook them up and eat them. I'll turn the skin into leather and try to make stuff with them."

Like other invasive species, iguanas can be legally killed on private property with landowner permission and on 25 public lands without a permit or hunting license — as long as the deed is done "humanely" — meaning the animal dies instantly and doesn't suffer.

Ausburn suggests using a high-powered pellet gun for the job, which is what he used this past weekend.

But watch out for the defensive tail whip if the iguana starts to warm up.

Iguanas can carry salmonella, which means their meat should be handled and prepared similar to chicken, according to a 2018 blog post by University of Florida's Institute of Food and Agricultural Science (IFAS) agent Brenda Marty-Jimenez. IFAS helpfully suggests removing the head, organs, and entrails before cooking.

Ausburn skins and cleans each iguana before storing them in Ziploc bags inside deep freezers he typically uses to store pythons. For those too squeamish to attempt to skin an iguana, IFAS recommends that they "be parboiled in salted water for 20 to 30 minutes before roasting or stewing."

Ausburn describes iguana meat as "mild" says it takes on the flavor of whatever it's seasoned with, like, say, tofu or cod.

He admits he's a picky eater but says he actually likes iguana meat. His favorite recipe is slow-cooking the iguana meat in a Crock-Pot with sweet potatoes and chickpeas. This allows the meat to tenderize and flake off the bone.

"When people say, 'You know, that's disgusting or that's gross' — it's the furthest thing from it. I mean, to me, anyway," Ausburn says. "I would not eat it if it tasted bad."

IFAS deems deboned iguana meat "very well suited" to curries, soups, stews, and gumbo. The organization even offers a recipe on its website for iguana tacos and burritos. A guy named George Cera even published The Iguana Cookbook, Save Florida Eat an Iguana in 2009.

But whatever you do, "DO NOT TRY TO MAKE IGUANA CEVICHE," IFAS warns.

Instructions
1. Grind the iguana meat and add salt, pepper, garlic powder, and cumin.
2. Form the meat into patties.
3. Toss onto a hot grill and cook until the patties are cooked all the way through.

Instructions
1. Arrange iguana legs, arms, and tail in a Crock-Pot.
2. Add remaining solid ingredients to pot.
3. Fill with water to cover and set to simmer on low for 5 to 6 hours.