A male green iguana (Not the culprit, but you get the idea.) Photo by Paul Asman and Jill Lenoble/Flickr
For 14 years, yoga instructor Anamargret Sanchez has taught a free community class at Legion Park in Miami's Upper Eastside neighborhood. It started with 20 people and grew over time, to the point where attendance can easily top 100 and regulars have braved hurricane watches and COVID-19 lockdowns to meet under the oak trees on Saturday mornings. Sanchez livestreams the sessions so those who can't make it in person can participate on Instagram.

The first Saturday of 2023 drew an especially large crowd — the weather was lovely, and only seven days into the new year, resolutions still glinted with potential.

Trigger warning: You won't believe what happened next.

The class proceeded as usual for 47 minutes: breathing exercises, upward and downward dog, warrior, triangle, and seated stretching poses. As always, Sanchez concluded by instructing yogis to roll onto their backs, lift their hips, and begin to look inward.

It was then that a series of noises — tree branches rustling, a loud thud, a cacophony of gasps — ensued.

"Guys, I think we are going to close the class," Sanchez can be heard saying on the Instagram Live video recording. "I'm going to take care of someone who just got an iguana dropped on his face."

That someone would be Michael, who agreed to speak with New Times on the quite understandable condition that we not publish his last name. ("I don't want to be known as the guy whose face was used as an iguana landing pad," he says.)

As Michael tells it, one moment he's relaxed on his back with his shade hat covering his face preparing for the final resting pose (savasana, sometimes referred to as "corpse pose"), and the next he's in excruciating pain, bleeding, and unable to open his eyes.

"I didn't see it coming. It felt like a sandbag hit me in the face," Michael says. "The first thing that went through my head was it must have been a coconut. But there were no coconut trees. And then I thought maybe the guy next to me slugged me — but, I mean, we're in a yoga class and it's so calm and peaceful. Why would the guy hit me?"

Nearby yogis who had their eyes open at the fateful moment would later inform Michael that his assailant was a green iguana weighing "between 20 and 30 pounds." Though iguanas are locally and nationally famed for lapsing into temporary paralysis and falling from high places when ambient temperatures drop below 50 degrees Fahrenheit, witnesses reported that this particular specimen had been dueling with an even larger iguana on a branch roughly 25 feet off the ground.

"There's a giant iguana that is the king of that frickin' park. I have seen it chase squirrels," Sanchez elaborates — though the eyebrow-raising weight estimate may bear a proportional relationship to the unsettling nature of the creature's arrival. "These two iguanas were having a moment in the tree, and I guess the smaller one was like, What the hell? I'm getting out of here! and jumped or was pushed — I don't know what the heck happened — I guess it might've lost its footing, and then fell onto this man's face."

Though Michael was in a lot of pain — his eye had swollen shut and he was bleeding from his nose and lip — paramedics with the City of Miami Fire Department happened to be at Legion Park's Saturday farmers market. They can be seen just beyond minute 48 on the livestream as they arrive on the scene holding bouquets of sunflowers. 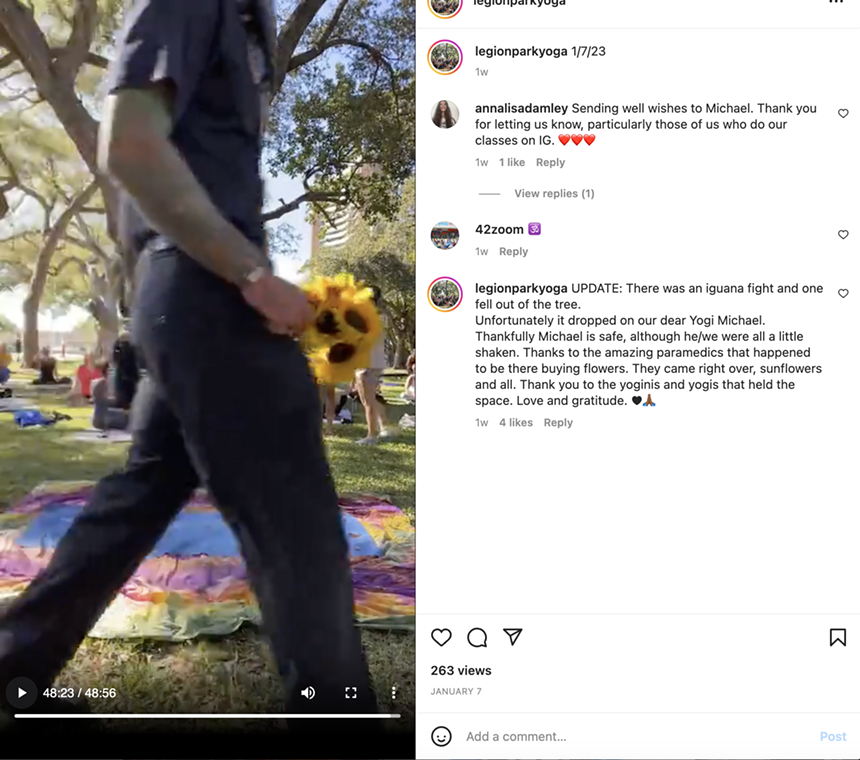 Paramedics with sunflowers respond to a yogi injured by an iguana.
Screenshot via Instagram/@legionparkyoga
The paramedics took Michael's vitals and checked his pupils. Assured that he'd be fine, he declined emergency transport to the hospital. A fellow yogi offered him an "anti-inflammatory tea" as he and Sanchez waited for Michael's wife to drive him home.

According to the Florida Fish and Wildlife Conservation Commission (FWC), green iguanas are native to Brazil and Mexico. They were first reported in Florida in the 1960s in Hialeah, Coral Gables, and Key Biscayne, apparently having arrived via the exotic pet trade. South Florida's extensive manmade canal system has provided the reptiles with what the FWC calls an "ideal dispersal corridor."

The reptiles, which can grow to more than five feet in length and weigh up to 17 pounds, can be troublesome neighbors, burrowing underground tunnels that collapse seawalls and sidewalks and occasionally popping up in your toilet. They feast on tree snails and the host plant of the Miami blue butterfly. Their watery scat is a nuisance. For all of these reasons — which don't even include the creatures'  disconcerting tendency to fall to earth with no provocation whatsoever — the FWC encourages homeowners to humanely kill iguanas on their property (and on 25 separate public lands in South Florida), no permit required.

For the record, at least one South Floridian has taken to eating them.

In September 2022, the City of Miami Beach quadrupled its iguana-removal budget to $200,000 in response to residents' complaints. At the time, council member Kristen Rosen Gonzalez suggested a bounty. "I don’t know — dead or alive. But if we pay per iguana we’re going to get more iguanas," she said. (The Cayman Islands instituted a bounty in late 2018; three years later, the green iguana population on Grand Cayman reportedly dropped from 1.32 million to 25,000 before bouncing back thanks to "an increasingly alert iguana population.")

As for what befell Michael, Zoo Miami spokesperson and wildlife conservationist Ron Magill tells New Times that it's not uncommon for male iguanas to fight, especially when females are around. That said, Magill adds, "It is less common when they are in the trees. It is certainly not something that the public needs to be worried about. You are much more likely to be bitten by a stray dog."

In the days since his injury, Michael has been urged to play the lottery and assured that an iguana landing on him was, like bird poop, a sign of good luck.

"It's kind of scary if you believe that kind of thing — out of 150 people in the class, I just want to know why me? But I'll put it this way: I don't think having an iguana fall on your face is good luck. I don't believe in guns, but iguanas should be shot on sight."

He points out that more than a week after the encounter, he still has a black eye and it hurts to laugh.

"I'm sure there are crazies out there who will come out to protect the iguanas," he says. "But we should shoot them out of the trees. If they're so beautiful, you should mount them."
KEEP MIAMI NEW TIMES FREE... Since we started Miami New Times, it has been defined as the free, independent voice of Miami, and we'd like to keep it that way. With local media under siege, it's more important than ever for us to rally support behind funding our local journalism. You can help by participating in our "I Support" program, allowing us to keep offering readers access to our incisive coverage of local news, food and culture with no paywalls.
Make a one-time donation today for as little as $1.