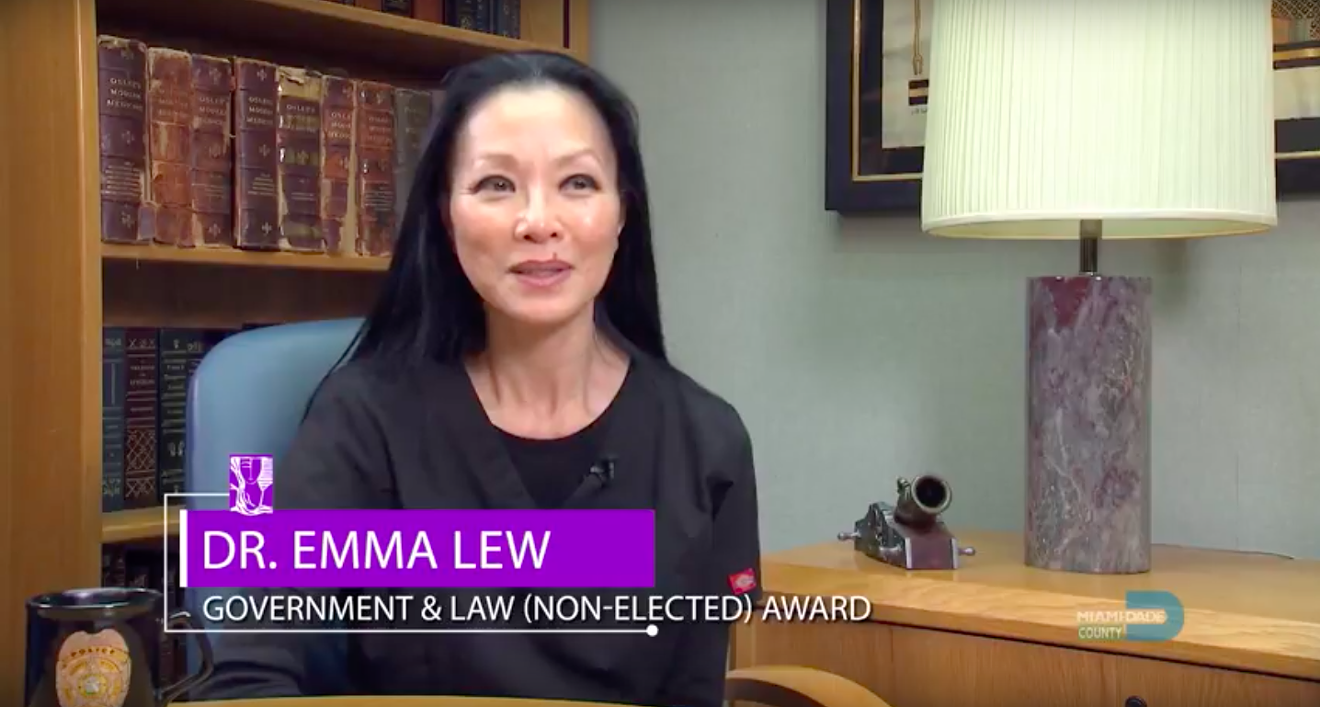 Miami-Dade medical examiner Emma Lew Miami-Dade County Government Award Video
Earlier this month, New Times revealed that the Miami-Dade corrections officer who in 2012 locked inmate Darren Rainey in a scalding-hot shower until he died had gone on to become a patrol cop with the Miami Gardens Police Department. The backlash over his employment with MGPD prompted the city to begin the process of firing Clarke. Yet there is another key player in the Rainey drama who has also escaped much public scrutiny: Dr. Emma Lew, the medical examiner who said Rainey's horrific death wasn't anyone's fault.

Four years after the scalding, in 2016, Rainey's autopsy report was finally released. Although gruesome photos of Rainey's body show huge portions of his skin peeling off his back, legs, and arms; blistering red skin; and exposed tissue, Lew concluded his death at Dade Correctional Institution was an accident.

Video footage and statements from inmates to investigators revealed that on June 23, 2012, Florida Corrections Officer Roland Clarke locked inmate Rainey in a shower with scalding-hot water as punishment for defecating in his cell. The schizophrenic 50-year-old was serving a two-year sentence for cocaine possession, and inmates interviewed by homicide detectives said he was screaming inside the shower for two hours. By the time Clarke returned to let Rainey out, he was dead. The shower locked from the outside, and the temperature and water controls were also outside the shower.

Lew's determination on December 30, 2015, that Rainey's death was an "accident" caused by "complications from schizophrenia, heart disease, and confinement to a shower" were key to Miami-Dade State Attorney Katherine Rundle's decision not to file criminal charges for Rainey's cruel death. As reported by the Miami Herald, Lew claimed Rainey's body had no burns and no trauma.

Now, Lew's personnel file shows she has since received a promotion, an award (for which Rundle nominated her), and a raise. Through a spokesperson, Lew declined to be interviewed for this story. A public information officer for the Miami-Dade Medical Examiner's Office noted that both Lew and the previous medical examiner, Dr. Bruce Hyma, worked on the autopsy report together and that the prison where Rainey died was run by the state, not the county.

Then, on September 13, 2016, Rundle and her second-in-command, chief assistant of the Felony Division, Kathleen Hoague, wrote a letter praising Lew and nominating her for the 2017 In the Company of Women Award for being an "Outstanding Woman in Government."

"Over the years, Dr. Lew has become our most trusted witness and medical resource to guide and assist us in all phases of death investigations and even medical issues in non-death prosecutions," Rundle and Hoague wrote. (The letter reads, "Sincerely, Katherine Fernandez Rundle" but is signed by Hoague.)

That same month, Mayor Gimenez sent a letter to the Board of County Commissioners naming Lew the new department director. "I am confident that Dr. Lew will continue to successfully lead the Medical Examiner Department as one of the leading forensic pathology institutions in the world," he wrote.

With that appointment came a 10.4 percent pay raise, Lew's personnel records show. In October, less than a year after she released an autopsy report stating Rainey's body showed no burns or trauma, Lew's biweekly paycheck increased from $9,058 to $10,000 — to about $260,000 per year.

On March 17, 2017, nearly five years after he was killed, Rundle's office closed the investigation into Rainey's death. Rundle concluded he was killed in an accident caused by complications of his mental illness and "confinement in a shower." A memo cited Lew's autopsy report as a major reason for her decision.

That same month, Lew was awarded for being an "Outstanding Woman in Government."

"I never expected to be nominated," Lew said in the video related to the prize. "I'm very honored."

Lew's personnel file is filed with certificates of appreciation from the Board of County Commissioners, Miami Dade College, and the Metropolitan Police Institute, which cited her "outstanding support" in internal affairs investigations. In June, 2017, Nova Southeastern University in Broward County offered her an affiliate faculty position with the university's College of Allopathic Medicine. Her role in the Rainey controversy is not mentioned.

Similarly, the corrections officer who locked Rainey in the shower advanced in his career with little culpability for his role in the brutal death. After being hired by the Miami Gardens Police Department in 2014, he was investigated for everything from pursuing personal relationships with women while on duty to losing evidence sought by homicide detectives after a drowning victim's death. He even crashed his police cruiser into another car after running a red light. He was nominated for the Dade County Police Benevolent Association's Officer of the Year Award in 2017.

As reported by the Herald, Alexander Lopez, a paramedic who saw Rainey's injuries the night of his death, wrote that Rainey was found "with second- and third-degree burns on 30 percent of his body."

The photos speak for themselves.

Lew told the Herald in 2017 she was so confident Rainey's injuries were not burns that she took only one skin sample to check. Two forensic pathologists interviewed by the Herald debunked the autopsy report by pointing out numerous faults in Lew's work. Both said photos clearly showed evidence of burns covering Rainey's body. They also questioned Lew's decision to take only a single tissue sample. Asked by the Herald about where on the body she had removed the sample, Lew did not answer.

The pathologists also noted a bruise on Rainey's right hand, corroborating inmates' claims he was banging on the shower door, begging for help. Lew did not mention a bruise in her autopsy report.

On January 26, 2018, the family of Darren Rainey settled a civil lawsuit against the State of Florida, Clarke, and others for $4.5 million.
KEEP MIAMI NEW TIMES FREE... Since we started Miami New Times, it has been defined as the free, independent voice of Miami, and we'd like to keep it that way. With local media under siege, it's more important than ever for us to rally support behind funding our local journalism. You can help by participating in our "I Support" program, allowing us to keep offering readers access to our incisive coverage of local news, food and culture with no paywalls.
Make a one-time donation today for as little as $1.